Oprah Winfrey’s interview with Prince Harry and Meghan Markle is still flooding the headlines. For one former star of The Brady Bunch, the legendary sit-down brought some unexpected attention – and profits.

When over 11 million viewers tuned in to see Oprah’s candid conversation with the royal couple on March 7, they may have noticed the comfortable yet attractive chairs being used for the interview. Yet it’s doubtful anyone realized that a former Brady Bunch star owns the furniture company that provided those comfy seats.

Christopher Knight, who portrayed Peter Brady for the show’s five-season run, owns the furniture brand that offers the wicker and acacia pieces. Apparently, the chairs did not go unnoticed. Christopher Knight Home Burchett outdoor chairs, which go for $554 a pair, are now sold out according to the company’s Facebook page.

“To our pleasant surprise, our wicker and acacia Burchett Outdoor Club Chairs were used for the Prince Harry and Meghan Markle interview with Oprah Winfrey,” the Facebook post read. “Currently, they are out of stock.” The post provided links to check for availability at a later time. 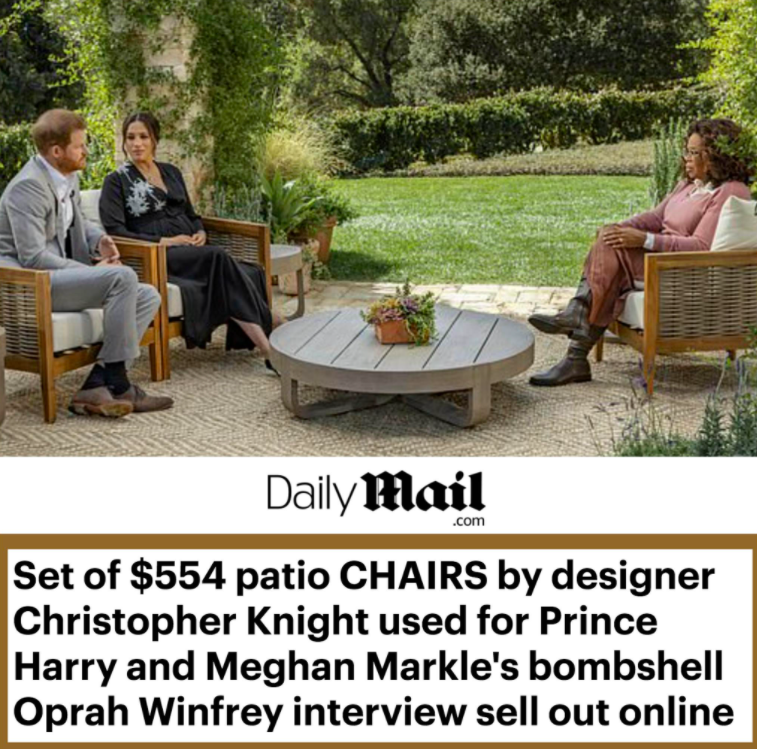 In addition to massive sales, Knight received shoutouts from fans and friends on his indirect appearance in one of television’s most historic interviews.

“In Oprah’s sensational interview with Prince Harry & Meghan this week, who would have thought the furniture would have been noticed at all, but it was,” Knight wrote on Instagram. “…and not even by me!”

The Brady Bunch alum expressed his gratitude for the recognition, and got creative with a little royal wordplay.

“I am honored to have the patio chairs from my collection become the seat of the most fascinating famous sit down in recent history,” Knight posted, alongside a photo of himself with his furniture collection. “It would appear Meghan and Prince Harry got ‘Knighted’ in a way never anticipated.”

Knight clarified that while he is the owner of the company, he did not design the now-famous chairs. He praised his team for their hard work and craftsmanship.

“Although it was stated that I was the designer of the furniture, I was not,” Knight explained. “⁠I am grateful to my talented business partners who have excellent taste, and skills in delivering a line of furniture that is both affordable and fit for royalty – both foreign and domestic.⁠”

The former sitcom star is still recognized for his Brady Bunch role, and credited the iconic series for the creating such a dedicated fan base.

“It became this thing that I owe everything to,” he told the New York Post in 2019. “What it really has provided is this wholeness with this community that’s huge. I’m a member of everyone’s family and that engenders this great outpouring of brotherhood and love. … Regardless of whatever generation you are … The Brady Bunch has never not been around.”