How to Go From ‘Veep’ Scene-Stealer to Action-Movie Apprentice

The poster for the new Chris Pratt sci-fi movie “The Tomorrow War” may have you doing a double take: Hey, over Pratt’s muscled shoulder, isn’t that’s Richard Splett from “Veep” brandishing a machine gun?

For 37-year-old Sam Richardson, who played the hilariously guileless Richard on that Emmy-winning sitcom, “The Tomorrow War” (premiering Friday on Amazon) offered a considerable challenge. As Charlie, a sweet-natured supporting character who’s conscripted to fight in a futuristic war, Richardson would have to to run, dodge and blast computer-generated aliens. Sure, “Veep” had demanded plenty of verbal dexterity, but facing off against an armada of space beasts would require an entirely different skill set.

Though Charlie is supposed to be a bit out of his depth in these fraught surroundings, Richardson, a Second City alumnus from Detroit, wanted to make sure he could handle everything his first action movie would throw at him. Still, it wasn’t long before he discovered that heroism comes with its fair share of hospital visits. Here are edited excerpts from our conversation.

Tell me how you got ready for “The Tomorrow War.”

I grew up watching action movies, and if you asked me when I was 6, I would have said, “Oh, I’m going to be an action star, like Jean-Claude Van Damme.” When the opportunity came and I was sent this script, just the idea of getting to do an action movie was so appealing to me. I was like, “Let me make sure I’m working out. I want to do the thing properly.” So I was working with a trainer at the gym, but my feet are naturally duckfooted and in the middle of a barbell squat, I adjusted my feet and popped my meniscus in my left knee. 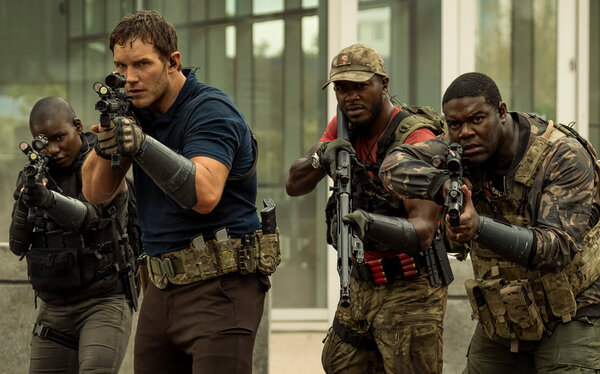 Oh no! Did you recover all right?

I had knee surgery, but I was like, “I’ll make sure I’m still ready.” I heal quickly, which is very fortunate for me. I got to set, and we were doing a scene running through the city in Atlanta, full gallop, and these other guys are running even faster. I’m just like, “Well, I’ll keep up,” but I’m also wearing this heavy pack, I’ve got all this gear on, I’m wearing jungle boots that aren’t meant for running in the city. And then, pop.

My hamstring went. We had to stop and get me checked out medically, and I was very slowly recuperating, getting myself back to fighting shape. Maybe three weeks later, I’d built my body back up to be able to run again, and we started shooting the same scene, just a few shots later. I’m running and then the other one, pop.

And I scream, “Damn it!” So then we stop, and now it’s like, this is a problem. They sent in a super doctor who works with the WWE and these athletes, and he kind of adjusted me, set me up, and then I was back and ready to go. He adjusted the way I walked, and I was like, “Wow, that’s incredibly helpful.” Some doctors just know physiology, go figure!

Injuries aside, prepping for a movie like this must have been a tricky thing. The premise of “The Tomorrow War” is that a lot of regular people get conscripted to fight, so if you get too fit, it’s undermining that idea.

Exactly. You never want to be called “Sam Richardson, the fat guy in the movie,” but you also don’t want to be an Adonis because that’s not what the part is: The whole idea is that it’s regular Joes being thrust into the situation that they’re completely unprepared for. It was that balance of still looking like me but being physically fit. And you never realize when you fall out of that fitness! At 20, I was like, “Oh, I can do a back handspring and then find myself with a six-pack.” Now, I can still try a back handspring, but I’ll find myself in a coma.

Did they make you do a lot of weapons training?

We did two weeks of serious military weapons training and tactical training, working with ex-military advisers who taught us how to use the guns and how a team of soldiers would enter a space and check the corners. It was an incredibly helpful thing for me because my character is not that, so it was good to know what to do in order to know what not to do. I am not the hero of the movie who’s like, “Let’s throw another shrimp on the barbie.” My character’s like, “Shrimp? Make sure it’s been cooked recently.”

When you hail from very dialogue-driven projects, what is it like to do a film that has entire shoot days where you’ll run and fight but not say a single word?

I feel like the scale of everything was enough to humble myself out of thinking, “I should be saying something here.” There’s just so much going on. Being on those sets, I was like, “Wow, this is a real-deal movie set. This is a bombed-out building with all this detritus and rubble on the floor.” Then you go to pick it up, and it’s foam! I’m such a fan of this sort of thing, and the experience of being in it was so overwhelming that there was no time when I was like, “Why am I doing this?” Well, maybe when I was injured. But every other time I was like, “This is just so cool.”

In “The Tomorrow War” and the new comic thriller “Werewolves Within,” where you play a kind-to-a-fault forest ranger named Finn, you’re exploring different versions of nice guys who are thrown into extreme circumstances.

I feel there is a spectrum on the side of nice. It’s like how, with a villain, you can go from a Karen in a grocery store to Thanos snapping his finger and destroying half the world: There’s so much space in between. With Finn, I likened it to Jason Bateman in “Arrested Development,” where he’s being surrounded by all the craziest people, but he’s also effortlessly funny. He is the most grounded, but he’s coming to terms with what it means to be nice: Do you have to shed that layer of niceness in order to survive in a community?

What was it like to watch your “Veep” co-star Julia Louis-Dreyfus join the Marvel Cinematic Universe with a cameo on “The Falcon and the Winter Soldier”?

I jumped. First, I’m a huge MCU guy. When I got my knee surgery, that night was the premiere of “Avengers: Endgame” and I was like, “Well, I’ve got to go,” so I went to the movie with crutches and on Vicodin, and I was on my feet, jumping on my bandaged, recently cut-into knee. I care about the MCU so greatly, so after avoiding spoilers and seeing Julia pop up on that screen, I was like, “This is just for me!” I truly lost my breath, I was so excited. I texted her: “Oh, Julia. I can’t believe this.” She was like, “Yeah, it was hard to keep that a secret for so long.”

You recently suggested a comic-book role you’d like to play — Beast from “X-Men” — and a lot of fans had run with that, hoping Marvel Studios chief Kevin Feige would cast you. Have you ever met with him?

I felt kind of nervous about that, like what if I say that and now Marvel’s like, “Never in your life, you don’t tell us what to do.” I went in for a meeting with Marvel years ago, and I was talking about how I love the character Falcon, and I think the guy I was talking to took that as me being like, “Fire Anthony Mackie and hire me.” He was like, “Well, Anthony does a great job.” I was like, “I know! I agree!” But no, I haven’t talked to Marvel about anything like that. I wish my phone would ring one day, and it’d be like, “Hey, it’s Feige. Meet me in my secret lair!”