Producer-turned-filmmaker Oge Egbuonu’s remarkable directorial debut, “(In)Visible Portraits,” was always going to debut during a fraught time in history. Three years in the making, the “Loving” and “Eye in the Sky” producer’s first documentary has been entirely crafted in the wake of numerous recent traumas inflicted on the Black community, from the continued killings of Black men by police to the deep pessimism and fear surrounding the current presidential administration, and that was before the historic protests of the last few weeks. Now, the documentary seems wildly prescient and urgent, providing a lucid look at both the past and the present that seems as if it could only be made during such pressing times.

The trick, of course, is that “(In)Visible Portraits” could have been made at nearly any time in recent history, as Egbuonu and her many subjects unpack a litany of harmful labels, conspiracy theories, and even their enduring hopes for the future over the course of just 92 minutes. Centered around the experience of Black women — particularly ones living in America since its inception — “(In)Visible Portraits” functions as both a necessary corrective to American history and an intimate exploration of what it means to be a Black woman.

The film’s deep reserve of talking head talent includes Joy Degruy (author of “Post Traumatic Slave Syndrome” and “America’s Legacy of Enduring Injury and Healing”), Dr. Patricia Hill Collins (professor of Sociology at the University of Maryland), Dr. Melina Abdullah (professor of Pan-African Studies at California State University Los Angeles and Co-Founder of BLMLA), and Dr. Ruha Benjamin (Associate Professor of African Studies at Princeton University and author of “Race After Technology: Abolitionist Tools for the New Jim Code”). Segments are linked together through poetry readings by writer Jazimine Williams and visual accompaniments by artist Victoria Cassinova, not all of which work in the context of the narrative Egbuonu is weaving, though they add texture and speak to the filmmaker’s desire to shine a light on important women.

While each interviewee has the education and experience to illuminate various topics in a historical sense — the documentary is mostly concerned with both understanding and dismantling the many harmful labels and archetypes that have been assigned to Black women over the years, including “the mammy,” “the Jezebel,” and “the welfare queen” — the film adds a further layer of intimacy because each is also speaking as a Black woman.

It’s that open-heartedness that makes “(In)Visible Portraits” such a wonder, because as Egbuonu and her participants are illuminating an often terrible history, they are also sharing themselves on increasingly personal terms. It’s difficult not to feel as if Egbuonu and her subjects aren’t talking directly to each viewer, teaching them through history and personal experience, and that level of trust and respect demands reciprocal action. 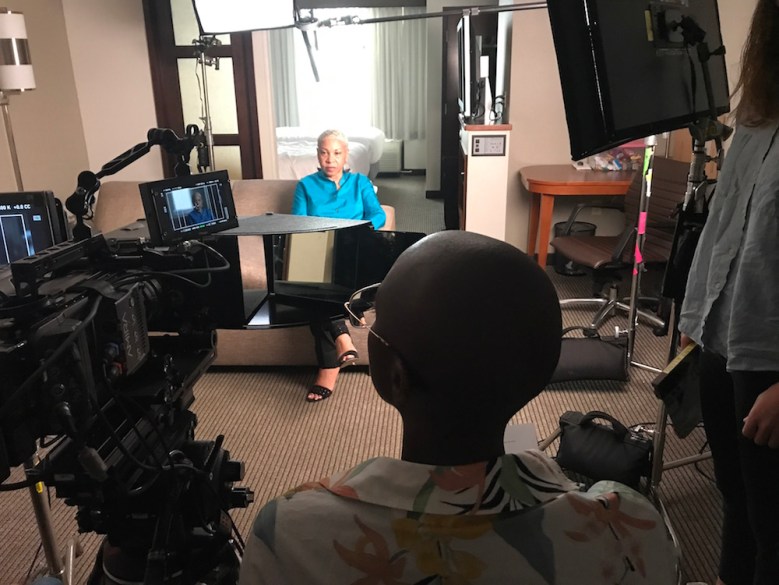 Despite the heavy subject matter that “(In)Visible Portraits” documents, Egbuonu’s choice to divide the film into segments, zipping through the historical context and through the current dreams of the next generation, keeps it moving right along. While not entirely comprehensive in its telling, the film provides an essential overview of various corners of history, and its empathetic bent is consistently engaging. The film succeeds at showing how these divisive labels (even the “good” ones) have permeated every inch of the Black woman’s modern-day existence, from the way they are treated by doctors (a section about the real roots of what we know as gynecology is haunting and horrible) to how old, tired tropes continue to sell products today (hello, “Aunt Jemima”).

If the intimate storytelling doesn’t hit viewers where it hurts, the film’s timely exploration of topics seemingly ripped from the headlines are destined to sting on their own. Egbuonu didn’t whip this one up overnight, but her exploration of the rise of “Karen” culture and an eye-opening look at the real history of American policing could not be more urgent if she had. If the world is now seeing so much made suddenly visible, Egbuonu’s film is simply another facet of a story that demands to be watched.

“(In)Visible Portraits” will be available for purchase on Vimeo on Friday, June 19, with a wider digital release on iTunes, Amazon, and Roku to follow.