Home » TV and Movies » Jackie Collins: Queen of trash or empowering feminist icon? Why not both

Jackie Collins: Queen of trash or empowering feminist icon? Why not both

Raunchy sex. A family hacked to death with a machete. Incest. Rape. Philandering. Even raunchier sex. And that’s just in the first 60 pages of a single one of Jackie Collins’ many books, her 1983 mega-bestselling hit “Hollywood Wives.”

There was a period of time in the ‘70s and ‘80s when a dog-eared Collins book with a cracked spine could be found on nearly every woman’s nightstand – or being read by flashlight under the covers by their precocious teenage daughters. (Those same women were watching her sister, Joan Collins, every week on “Dynasty.”) With the astronomical popularity ofthe British author’s steamy novels came a fair bit of cultural handwringing. Was Collins, who died of breast cancer at age 77 in 2015, the queen of trash, as her critics railed, a shameless smut peddler – or was she an empowering feminist icon worthy of respect?

Why, in fact, could she not be both?

In this Feb. 12, 1968 file photo, author Jackie Collins holds her first book, “The World Is Full Of Married Men,” at her apartment in London. The author is the subject of the new documentary "Lady Boss," premiering June 10 at the Tribeca Film Festival. (Photo: Bob Dear, AP)

That’s the contention of a new documentary about the author, “Lady Boss: The Jackie Collins Story,” directed by Laura Fairrie (premieres Thursday at the Tribeca Film Festival and June 27 on CNN). The documentary is not a reappraisal of her books’ literary merits – they are unabashedly trashy wish-fulfillment featuring bold and sexy heroines who know how to get what they want, in bed and out. Rather, the film offers context, showing how Collins’ life and wider societal shifts shaped her work – and why it deserves a fresh look after falling out of vogue.

Her life’s story could fill several page-turners. Growing up in the shadow of her famous older sister Joan, the documentary shows Collins struggling to find her place, personally and professionally. She tried acting, like her sister, but didn’t get far; her nose was too big, casting directors said, her figure not as good. She got married and started a family, but her first husband, Wallace Austin, was abusive and mentally unwell. They separated, and Austin died by suicide shortly after the marriage ended.

That family tragedy was also an opportunity. “This was the defining point in her life, to moving her on, to protecting herself. And how did she do that? She created a world for herself of wonderful characters who wouldn’t let her down,” Collins’ daughter Tracy Lerman says in the film. “If she could become successful in her own right, nobody else could take that away from her.”

Single and sexually liberated in the swinging ‘60s, Collins finally began to find herself. She’d always been a diarist and family archivist, keeping track of everything in her distinctive looping script; now, she began to take notes on the people around her, the celebrities at happening London night club Tramp and the drama they brought with them. When her supportive second husband, night club owner Oscar Lerman, discovered her writing, he encouraged her to turn it into a book.

Her books were instant bestsellers. As copies of “The World Is Full of Married Men” and “The Stud” flew off the shelves, her image started to take shape. The Collins the public knew from her dust-jacket photos and TV appearances – with her teased helmet of hair and enormous shoulder pads, swathed in leopard print and glittering baubles – was more than a brand, it was a suit of armor she wore through the world, a projection of the strength and glamor she wrote into her heroines’ lives. 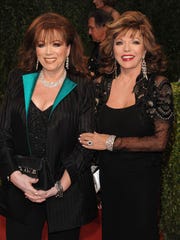 Author Jackie Collins, left, posed with her sister, actress Joan Collins, star of the '80s TV show "Dynasty," at a Vanity Fair Oscar party in West Hollywood, Calif., before her death in 2015. Joan opens up about their relationship in the new documentary "Lady Boss." (Photo: Evan Agostini, AP)

After finishing “Lady Boss,” I went to my local used bookstore and found a timeworn paperback of “Hollywood Wives,” hoping to get the flavor of her writing. I thought I’d make it 20 pages before tossing it in the discard pile. I am a reader inclined to snobbery: I turned my nose up at “Twilight” and “Fifty Shades of Grey” and give bodice-rippers the side-eye. Spare me the YA and cozy mysteries; I’m saving myself for literature.

Over time, I have come to realize this inclination is not a virtue, that I am not a better person for reading “Anna Karenina” instead of occasionally indulging my baser desires. The more time I spend as a woman in the world, the more I realize that I, like many, have been culturally conditioned to look down on entertainment specifically enjoyed by women: soapy dramas, giddy rom-coms, fresh-faced boy bands and definitely Collins’ novels.

I can think of no male writer of macho thrillers every bit as tawdry as “Hollywood Wives” who has faced the amount of critical scorn leveled at Collins in her later years. The documentary unearths one particularly painful clip from a ‘90s British talk show, in which Collins is admonished to her face by guests – nearly all women. One said she found her books demeaning. Another called them disgusting. Another called the notion that she writes positive role models for women “utter bilge.” “I wouldn’t say that you’re a feminist in any way at all,” one woman said. The times were changing, and Collins’ brand of glitzy girl-boss domination was no longer in style.

But Collins very much considered herself a feminist. “Girls, when they leave school, should be taught that in life they can do anything,” she said in one clip. “I really have this strong belief that women can do anything.” That anything includes writing and reading sleazy page-turners for the fun of it.

I have to wonder if any of those talk show guests had actually tried reading Collins’ books before publicly excoriating her or if they were simply rolling with the cultural tide. Because this self-avowed snob is already halfway through “Hollywood Wives” and can’t turn the pages fast enough to find out what happens next.

All those ‘80s women with Collins’ books on their nightstands weren’t delusional, self-hating anti-feminists – they were onto something.