The Good Morning Britain presenter’s husband Derek Draper has spent almost a year in hospital after he was first admitted with coronavirus in March 2020. While the virus is no longer in Derek’s body he continues to battle with kidney failure, liver failure, heart failure and damage to his pancreas. Kate Garraway, 53, allowed cameras into her home to document her family’s life as they wait for news on Derek’s progress. Speaking on GMB on Tuesday morning, Kate admitted her husband has “regressed” which she believes is a result of the latest national lockdown.

A clip of Derek saying the word “pain” was shown before Kate opened up on how she has been communicating with her husband.

“That must have been particularly hard for you,” Susanna Reid commented. “Since then, you have had conversations with Derek, which are captured on film.”

Kate replied: ‘Maybe conversations is stretching it because we all have strong memories of conversations with Derek which were particularly fulsome.

“It’s not, maybe it’s more words and being able to interpret them. 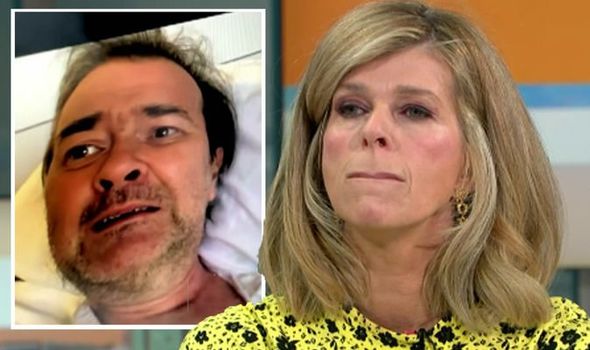 “That has regressed since the documentary, it has to be said this year has not been so good. We can talk about that in a little bit.

“But there were and that gives you hope and there are moments in the documentary where I think people who know Derek will know he is there.

“For such a long time that has been the horror, ‘Is he still in there? Is he trapped inside himself? Is he gone?’

“He’s even got his accent back. There’s even some good old Chorley coming through, you can’t take Chorley out. So that is just miraculous actually.”

“I just think the FaceTime communication is hugely important for you but it goes back to the point that we’ve been making about visiting in lockdown,” Susanna remarked.

“People are at their lowest, facing their toughest challenges, not being able to be with each other.”