Sometimes it feels as though 2020 has been a black hole for television. Quality programming will be released and briefly celebrated before being swallowed whole by a gaping maw of indifference, fueled primarily by outrage and fatigue and forgetting to change out of your pajamas before working from home for the 244th consecutive day. Hulu’s “Pen15” released the first half of an impeccable second season less than two months ago, but I regularly forget about it because far too much of my mental energy is regularly absorbed by deciding whether I’ll be more productive working from my bed or working from my couch. FX’s “Fargo” is in the midst of airing a solid fourth season, a fact that refuses to find purchase in my brain because of all of last week’s sleepless nights spent agonizing over the color of Steve Kornacki’s pants.

Which is all to say that when a show does break through the general malaise and find traction with audiences, it almost certainly has pulled off something spectacular.

If you’ve watched Netflix in the last two weeks, you’ve undoubtedly noticed “The Queen’s Gambit” prominently featured, in large part because the limited series has been rock solid in the No. 1 spot of the streamer’s U.S. Top 10 list since Oct. 25 and globally since Oct. 28.

On the surface, the series appears to be an unconventional hit. Centered around an orphaned girl turned chess prodigy and her struggles with success and failure, addiction and loss, and featuring detailed games of chess in each episode, it’s a far cry from a certain Netflix documentary series that was all the rage at the beginning of the year.

“The Queen’s Gambit” is Scott Frank’s second project with Netflix, after “Godless,” the 2017 limited series western that stealthily scored 12 Emmy nominations and three wins — two for the respective performances of Jeff Daniels and Merritt Wever and one for the score by Carlos Rafael Rivera — so the creator is no stranger to successfully telling nuanced stories centered largely around women.

And Frank, who wrote and directed each of the series’ seven episodes does just that, in no small part thanks to an electric performance by Anya Taylor-Joy whose portrayal of Beth Harmon is impossible to look away from.

What does it all mean, though, in terms of translating popularity to awards success? 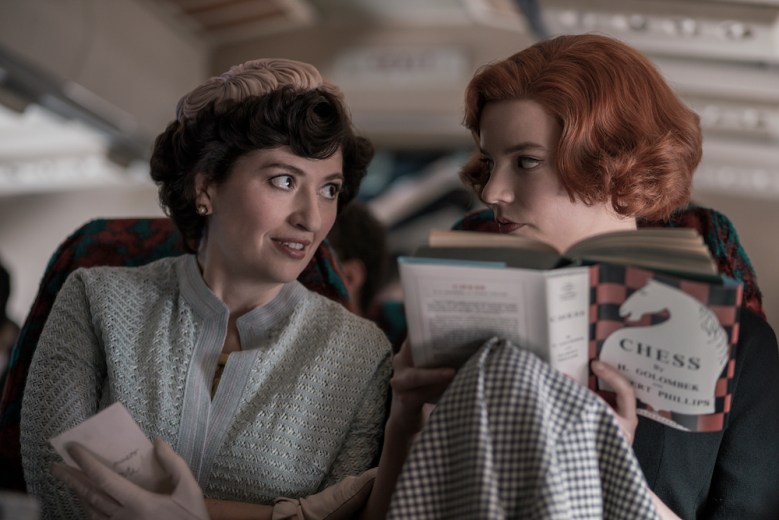 Marielle Heller and Anya Taylor-Joy in “The Queen’s Gambit”

If Golden Globes or guild voters are looking for things to celebrate, they need to look no further than nearly every element in play with “The Queen’s Gambit.”

In adapting the eponymous 1983 novel, written by Walter Tevis, as well as credited co-creator Allan Scott’s script from an unrealized film scrapped in the wake of Heath Ledger’s death, Frank tackles a near impossible challenge: How do you make something as internal and potentially stilted as a chess match, not only inviting, but gripping to watch?

Frank manages both and it’s here that Taylor-Joy’s value really asserts itself. The young actress stares down the barrel of the camera and thinks, which doesn’t sound interesting, but might actually be the best thing I’ve witnessed on TV this year. The series so thoroughly grounds Beth’s process when it comes to visualizing her moves that it feels as though you’re physically seeing the gears in her head turn, all as Taylor-Joy’s wide eyes flit over her options, chess pieces reflecting in her pupils.

So, yeah, the writing and direction is pretty good.

But let’s go back to Taylor-Joy, who delivers one of the best performances of the year, simultaneously vibrating on an ultrasonic frequency and embodying a languid sort of grace, particularly when seated at a chessboard. She is never particularly showy in the role, but her brusque, sometimes impatient energy as Beth draws the audience in so efficiently you’d swear she was a mesmerist.

It is the exact opposite energy brought by co-star Marielle Heller, perhaps better known for her work behind the camera as director of “A Beautiful Day in the Neighborhood” and “What the Constitution Means to Me,” whose work as Alma Wheatley is subdued, but never serene. Alma and Beth share the unease of people with an uncertain place in the world but also the comfort of knowing that they have found a sense of solace in each other. Too often a character like Alma would be pushed too far either way — a hectoring antagonist or a used-up washrag — but Heller finds balance in a woman who knows what it is to lose, with a tendency toward unhealthy self-medication, but who can still find purpose and empathy, particularly for Beth. 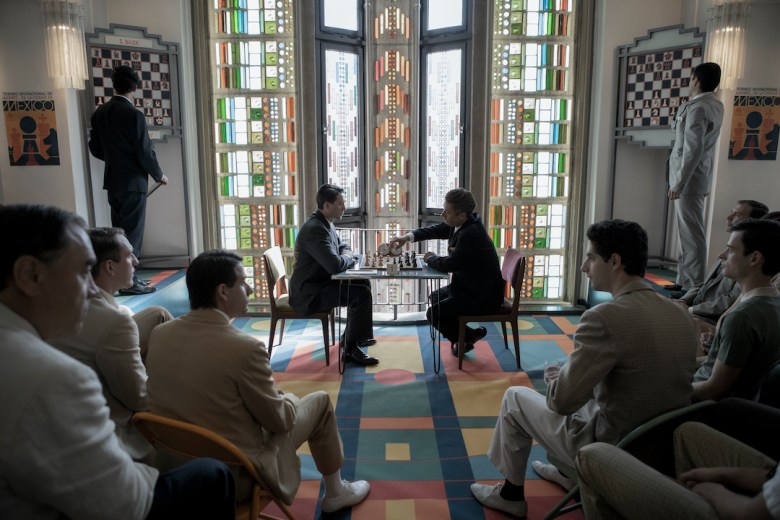 All of that being said, I do think that there’s one aspect of “The Queen’s Gambit” that might be even more awards worthy than everything talked about so far.

There’s something absolutely otherworldly about the world as created by the show’s production designer Uli Hanisch. Whether it’s the orphanage that populates much of the first episode or the Wheatley home or any of the fabulous locales where chess tournaments are held, everything is palette-matched and perfect. It’s the best possible version of the 1960s, full of pattern clashing and bold color statements, too perfect and matchy to be real, but exquisite enough to provide a vibrant contrast to a very black and white game played on a very black-and-white board.

Of course, we should expect nothing less from Hanisch, a longtime collaborator with filmmaker Tom Tykwer, whose production design is one of the hallmarks of another Netflix prestige player, “Babylon Berlin,” a psychological neo-noir German import about the Weimar Republic in 1929 (and arguably one of the best shows currently available on streaming.)

Costumes, hair-styling, performances, writing, direction, art and production design, not to mention music — scored by aforementioned Emmy-winning composer Carlos Rafael Rivera — “The Queen’s Gambit” has found its audience and, judging by an embarrassment of riches on the creative side, will almost certainly find its popularity translate to awards season as well.