BBC Breakfast viewers were left concerned after Sir Michael Parkinson appeared in a pre-recorded interview alongside his son, Michael Parkinson Jr. Together, they spoke to Dan Walker about the TV legends latest book, as well as some funny antidotes and stories which Michael experienced throughout his career.

Louise Minchin began: “As the undisputed King of the talkshows, his interviews have given us an insight into the lives of some of the biggest stars. Now, Sir Michael Parkinson is reflecting on his own life and times.”

Dan took over and said: “He’s interviewed everyone there is, but his latest book explores the relationship with his father and his son, I went to meet them both.”

During the interview, Dan asked the father and son about the details of the memoir and they spoke about Sir Michael’s father, their relationship and of course, Sir Michael’s infamous career.

But, those watching at home were shocked by Sir Michael’s appearance and took to Twitter to comment.

It comes after Sir Michael spoke about his own father, he told Dan: “When I was talking to people, I would always end up – almost without knowing it – asking them about their relationship with their father. 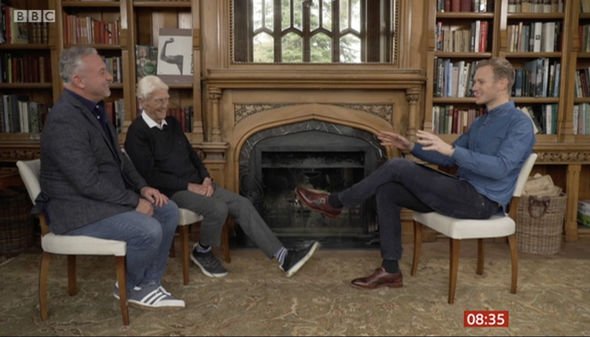 “What was interesting, and I never understood, I knew how much I loved my father, I know why I loved him and all that, he was a sweet and dear man. But also, I learned an awful lot from him, about being a father.

“I didn’t carry much into practice as he [Michael Jr] will confirm.”

“He was a man who had that incredible ethic of hard work,” Dan added. “That has seeped down throughout the Parkinson generation, as well.”

Michael Jr said: “The difference is, his hard work was potentially life-threatening. That’s the thing that mad emeralds fascinated by my grandfather. 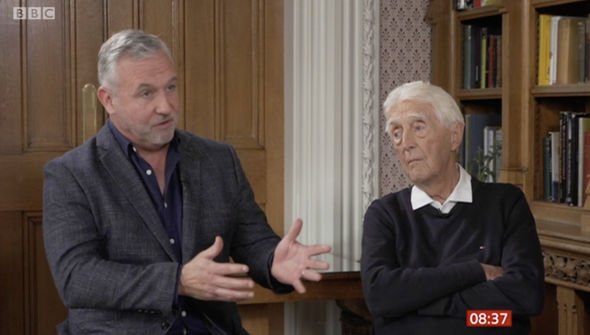 “It was one thing to say he was a miner, but it was another thing to actually discover what a miner did; it was frighting and shocking to a certain extent.

“This wonderfully kind, funny, happy man emerged from that hole in the ground after nearly 40 years working – in a job that would destroy me in a day – was actually amazing.”

“You had to be some kind of saint to do it,” the chat show host continued.

“Were you like your father?” Dan asked Michael before turning to Michael Jr. and saying: “Is it best to ask you if Sir Michael was like his dad?”

Michael Jr. responded: “My attitude would be, he is much more like his mum, my gran, and she was a formidable woman. They had similar ambitions and drive.”

“I didn’t find it hard, I can be that. I think I’m changing as I’m getting older, I’m getting nicer,” Sir Michael remarked.

BBC Breakfast airs every day at 6am on BBC One.