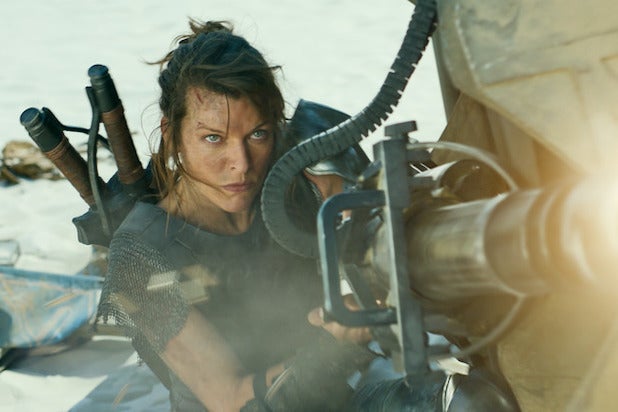 There’s a nice moment about halfway through “Monster Hunter,” when Captain Artemis, a U.S. Army ranger played by Milla Jovovich, and Hunter, a warrior of uncertain provenance played by Tony Jaa, are preparing to head into battle against, well, a monster.

Captain Artemis looks at Hunter with a steely gaze, because that’s clearly her forte, and says something she’s no doubt said plenty of times before in plenty of other dicey situations: “Let’s do this.”

Whereupon Hunter, who doesn’t speak English because he’s not from our world, gives her a blank look. “Huh?” he says.

Artemis stops, realizes her schtick isn’t playing to this audience, and shrugs. “Never mind,” she says.

It’s an amusing exchange, one of only a few in Paul W.S. Anderson’s extravagant foolishness based on the Capcom video game of the same name. But “Let’s do this,” “Huh?” and “Never mind” also make for an appropriate reaction to this giant heap of hyperkinetic melodrama drowning in CGI.

“Let’s do this” because lots of people do indeed do lots of stuff throughout “Monster Hunter,” “Huh?” because it’s borderline incomprehensible much of the time and “Never mind” because it doesn’t really amount to much of anything, unless you’ve got a real yen for this kind of thing.

And, you know, some people do. On its own terms, “Monster Hunter” might work as silly, frenetic entertainment, if you don’t look too close or think too hard. But if looking and thinking are on your agenda, you might also leave it with a real headache.

The film starts with a warning, or maybe an invitation: “IT IS ENTIRELY POSSIBLE THAT BEHIND THE PERCEPTION OF OUR SENSES, NEW WORLDS ARE HIDDEN OF WHICH WE ARE TOTALLY UNAWARE.” Said New World immediately arrives with a prologue in which a wooden sailing ship plows through a sea of sand, stirring up a beast that “swims” beneath the sand and causing the ship’s captain, played by Ron Perlman, to go into full glower mode.

The pace is frantic, the sand is thick and the camera stops moving only long enough to lock on the faces of some plucky heroes who shoot us and each other determined looks. There’s heavy-duty action going on, but it’s hard to track who’s doing what to whom, and hard to care — this is the kind of VFX-driven action where everything is possible but nothing feels as if it has real stakes.

Those stakes are supposed to arrive once the prologue is done, when we find ourselves on a desert mission with Captain Artemis and the other members of her “U.N. Joint Security Operation.” They’re a group of plucky warriors who kiss family photos or fondle gold rings before heading into battle – and before you can say “new worlds of which we are totally unaware,” a sand-and-lightning storm has whisked them into that monster-heavy desert we saw in the prologue.

The most common line of dialogue in the early going is some variation on “What the hell is that?,” which makes sense as giant spider monsters pop up everywhere and the size of Captain Artemis’ unit keeps shrinking.

“Nothing about this is right,” Artemis says at one point, and for some she might be talking about the filmmaking style: Anderson, best known for the “Resident Evil” films, has honed his style on videogame adaptations and sci-fi flicks, and this film has a kind of hyperactive cheesiness that can be exhausting to watch. The fight scenes have so many cuts that when Tony Jaa shows up from the alternate world, it’s almost impossible to tell that he’s a real martial artist; cinematographer Glen MacPherson’s camera seems afraid to settle on people or faces for long, preferring to back off, swoop in, hover above and swing around whenever it can.

Artemis and Hunter try to kill each other for a while, but this is a movie where it’s not easy to kill humans or monsters. And then they bond, of course, with a little help from a pit of those spider monsters and a melted Hersey bar. Then they conquer the language and culture barrier, united by their shared zest for hunting monsters and for coming up with elaborate plans that always seem to involve way too much running away from faster and bigger creatures.

A very furry Ron Perlman eventually returns after his cameo in the prologue to explain what the hell has been going on, looking as if he’d been in the makeup chair for “Cats” but stormed out before they got to his face. Then an essentially unkillable dragon shows up, and the whole thing gets louder and sillier and more chaotic – and, perhaps, more fun, for those who can appreciate the frenzy of a videogame adaptation that would rather pummel you into submission than ever come up for air.

Maybe some so-bad-it’s-good aficionados will embrace “Monster Hunter” as well. But for the rest of us, the only sensible reaction might really be, “Huh? Never mind.”