Life gets really confusing for the titular Naomi once her powers begin to manifest, in the latest trailer for The CW’s upcoming superhero series (premiering Tuesday, Jan. 11 at 9/8c, where it will out of Superman & Lois Season 2).

Starring The Equalizer‘s Kaci Walfall, Naomi follows a cool, confident Black teenager as she comes to realize her hidden destiny and then “journeys to the heights of the multiverse” in search of the full truth. In the new trailer above, Naomi’s out-of-this-world odyssey is thrust into motion by a local Superman “stunt” that draws the attention of her blog about the maybe-not-so-mythical Man of Steel. 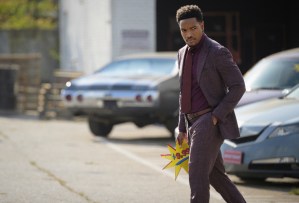 In turn, Naomi herself lands in the crosshairs of Akira (Law & Order: SVU’s Stephanie March) and Zumbado (Hap and Leonard’s Cranston Johnson), who plot to draw the teen into their manipulative and thirsty web. Elsewhere, Alexander Wraith (Marvel’s Agents of S.H.I.E.L.D.) plays Dee, a tattoo parlor owner (and [spoiler!]) who appears to have Naomi’s best interests at heart.

As the trailer comes to a close, Naomi loops in her parents Greg (7th Heaven’s Barry Watson) and Jennifer (The Vampire Diaries’ Mouzam Makkar) about all that is crazy and new in her world — but might they already know?

Are you excited about Naomi and what DuVernay and Walfall will bring to the comic-book adaptation? Watch the trailer above and drop your thoughts in the comments.