Bloom’s surprising Season 3 romance was the brainchild of new staff writer Shanthi Sekaran, who “came in with her ideas about the show and about the characters, just from the fan perspective, stuff that we’ve never talked about or never discussed,” Schulner says. “She pitched the whole story out with Leyla from day one. ‘Bloom finds a doctor who she clashes with, finds out she’s homeless and stashes her in the closet at New Amsterdam. Eventually, she gets found out and has to move in with Bloom, and they develop a romance together.’ She just pitched that on day one, and I was like, ‘Great! Let’s do that!’” 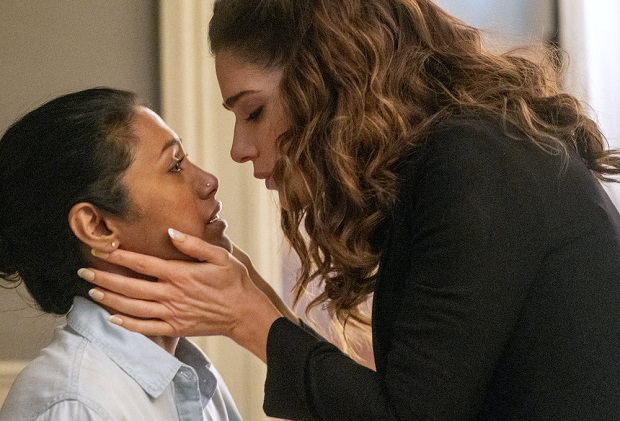 Through the unexpected relationship, the medical drama has been able to reveal aspects of Bloom’s sexuality and past that heretofore had been unexplored. (Her previous two love interests on the show were both men.) “I think what’s great is it tells the audience you don’t know everything about any of our characters,” Schulner notes, “and there are more surprises, and there are more revelations, and the characters are richer and deeper and will continue to grow throughout the series.”

Looking ahead at the couple’s future — there are just two episodes left to air this season — Schulner teases, “Lauren will get tested and have to decide how important Leyla is to her and how much she’s willing to risk to keep Leyla close.”

Press PLAY above to watch the sneak peek, then hit the comments with your hopes for Lauren and Leyla!