During Wednesday’s Good Morning Britain, Ben Shephard thought he would pull a prank on his co-star Susanna Reid, although, it ended up backfiring on him. As Susanna was wearing a green dress to present the ITV programme, Ben pointed out that because it was green they could replace the dress with any pattern of their choice. As a joke, he decided to replace the green dress with a montage of pictures of his face.

As Ben was talking about the pictures of his face, he accidentally said the word “nipples” instead of “nostrils”.

Susanna wouldn’t let him live the remark down and poor Ben was left rather embarrassed by the blunder.

Viewers also took to Twitter to share their delight at the slip-up as one commented: “Great hilarity at Ben Shephard saying nipples instead of nostrils.”

Another joked: “That was the funniest thing ever.” 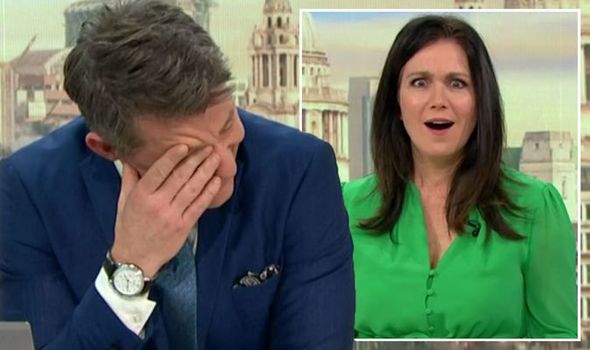