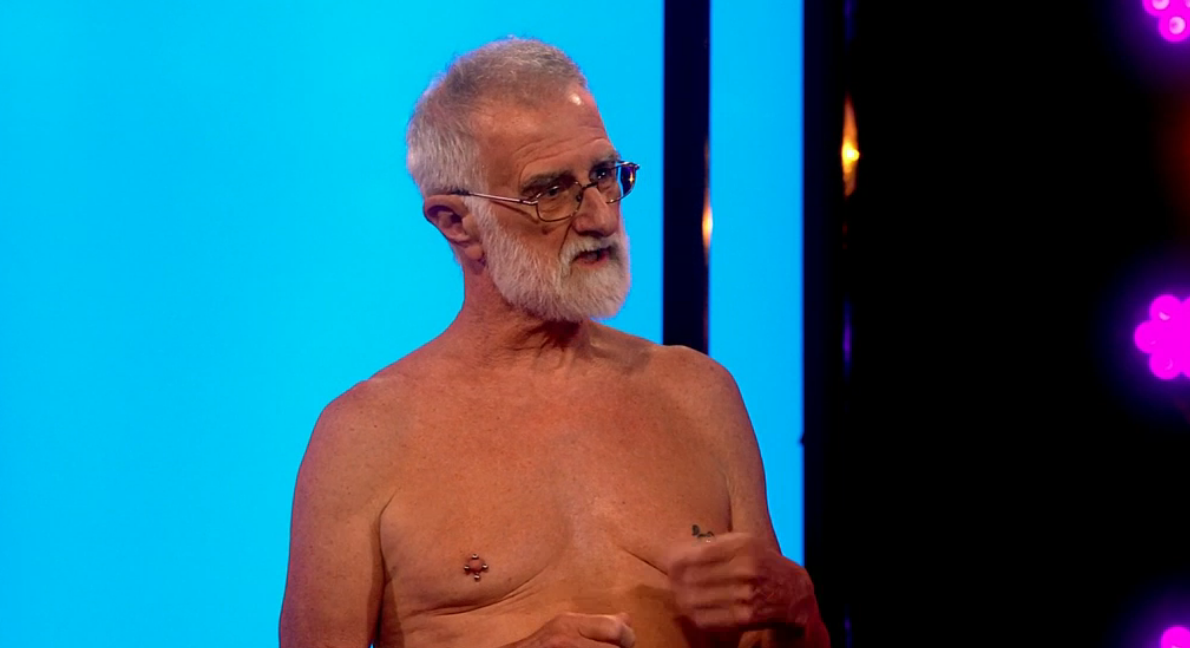 Naked Attraction saw its oldest ever contestant appear on the show looking for love in the latest episode on Tuesday night.

Ian, 75, told host Anna Richardson that he wanted to find a companion after the death of his wife of 31 years.

He described himself as a nudist who found he also enjoyed experiences with both women and men, having his first gay experience at the age of 70.

On the episode Ian had a selection of men and women to choose from, and it had to whittle down six possible partners to just one.

When checking out one man who had a Prince Albert piercing – a metal ring pierce through the tip of the penis – Ian revealed he had a few of his own saying: ‘I had 17 piercings at one time. I have 6 now.

‘I’m looking for a companion, someone that will share my lifestyle. I’m a nudist. I’ve given up caring what people think. I’m open minded.’

When Ian stripped off for his potential dates, he revealed he had his nipples pierced, a Prince Albert and a guiche piercing, which goes through the perineum (the skin between the genitals and anus).

Some of the singletons he turned down included Jane, 67, who wore a stick-on vajazzle.

His final two picks were Veronica, 57, and Alan, 55. He eventually chose Veronica to go on a date with as he like the sentiment behind her model of a clay heart, as she explained it was important to her to find a partner that had a good heart.

On their first date Veronica said she would be up for going to a nudist beach, revealing she is ‘not prudish’.

Ian said: ‘I would love to take Veronica to a nudist beach, I’d be the envy of the whole beach.’

Veronica shared with Ian that she is trans, adding: ‘For a lot of my life I didn’t have a lot of the confidence I have now.’

Despite seeming to hit it off on their date, Veronica said she felt Ian was too old for her.

However they revealed later that they exchanged numbers and have been messaging each other regularly since, and plan on staying friends.