Oscar Nominations 2021: Two Black Women Are Up for Best Actress

Andra Day and Viola Davis are the category’s first pair of Black nominees since 1973, when Diana Ross was nominated for “Lady Sings the Blues” and Cicely Tyson was up for “Sounder.” 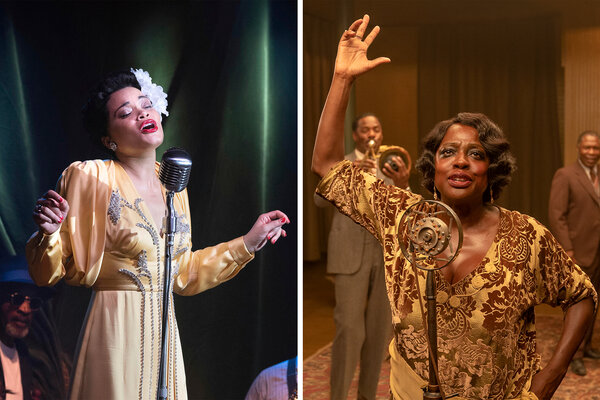 Andra Day was just the second Black woman to win best actress in a drama at the Golden Globes.

Now, she’s part of another milestone: For the first time in nearly 50 years, two Black women are up for best actress in the same year.

Day, who plays the iconic singer Billie Holiday in the Hulu biopic “The United States vs. Billie Holiday,” and Viola Davis, who plays another pioneering singer in “Ma Rainey’s Black Bottom,” are the first pair of Black actresses to be nominated since Diana Ross (“Lady Sings the Blues”) and Cicely Tyson (“Sounder”) faced off in 1973.

And, in a twist of fate, Day is nominated for the same role that Ross played. Though, she’s probably hoping for better luck: Ross lost the 1973 race to Liza Minnelli, who won for her performance as Sally Bowles in “Cabaret.”)

Day told Variety in January that she took an immersive approach to her character, including losing nearly 40 pounds and taking up drinking and smoking cigarettes. “I just asked God to give me all of the pain and trauma,” she said. It was her first acting role in a major film.

Though “The United States vs. Billie Holiday” received mixed reviews, Day garnered critical acclaim for what The New York Times co-chief film critic A.O. Scott called her “canny and charismatic” performance. Her voice, he wrote, “has some of Holiday’s signature breathy rasp and delicate lilt, and suggests her ability to move from whimsy to anguish and back in the space of a phrase.”

This is Davis’s fourth nomination (she won best supporting actress in 2017 for her role in “Fences”). In “Ma Rainey,” she plays blues singer Ma Rainey alongside Chadwick Boseman’s trumpeter, Levee, in what was the late actor’s final film role before he died of colon cancer in August.

“Davis brilliantly portrays both the vulnerable position and indomitable spirit of this sturdy figure,” Mark Kermode wrote in The Guardian in December, “with fiery eyes shining through the dark shadows and battered rouge of her makeup, proudly standing her ground.”

Day and Davis will go up against Vanessa Kirby (“Pieces of a Woman”), Frances McDormand (“Nomadland”) and Carey Mulligan (“Promising Young Woman”).

In the more than 90 years the awards have been handed out, there has been only a single Black best actress winner — Halle Berry for “Monster’s Ball” in 2001.