Good Morning Britain (GMB) host Piers Morgan broke into a savage rant accusing Pension Secretary Therese Coffey of lying about the Government’s commitment to test 100,000 people for coronavirus daily. During GMB this morning, Mr Morgan played an extract from Ms Coffey’s statement regarding testing during an interview she did on BBC Breakfast.

In the statement, Ms Coffey said the Government has increased testing capacity rapidly but she recognises there have been a handful of days where the target of 100,000 people tested was reached.

Mr Morgan replied: “So she recognises that there have only been a handful of days when more than 100,000 people have gone for a test.

“Therese Coffey, if you were on our programme, if you had the guts to come on, I would have said to you there have been no days.
“Zero, nada, nil.

“What you just said was a lie!

DON’T MISS: ‘Get a grip’ Gordon Brown hits out at Boris – demands he address issue 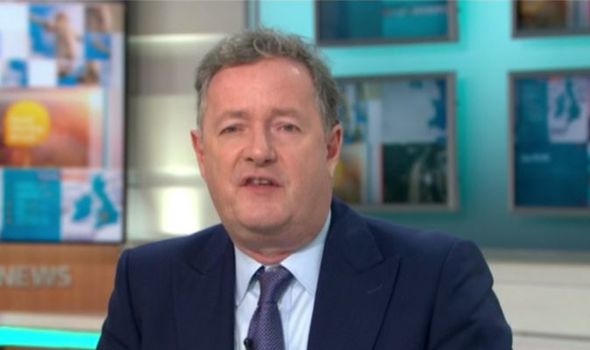 “You just told BBC viewers that there had been a handful of days when over 100,000 people had been tested.

“No, there have been a handful of days when you have conducted 100,000 tests.

GMB co-host Susanna Reid then clarified why this was the case.

GMB co-host Susanna Reid then clarified why this was the case.

She said: “Because some people require two or three tests.”

Mr Morgan continued his enraged rant attacking the Government for their claims regarding testing.

Coronavirus shielding: How can to get a shielding parcel? – EXPLAINER
Queen heartbreak: Monarch to hide from public until THIS date – INSIGHT
Coronavirus mass testing could end epidemic in Britain by Christmas – ANALYSIS

He closed by saying: “Several tests to establish whether they are negative.

“So that is another Government Minister avoiding us, lying through her back teeth to the country about what they are doing with testing.

“And she is the one who says how proud she is of the testing.

“Well, of course, it is easy to be proud if you base it on a pack of lies.”