“A person who thinks only of building walls is not Christian,” the pope says is the film, which director Evgeny Afineesvky wants Americans to see before the election 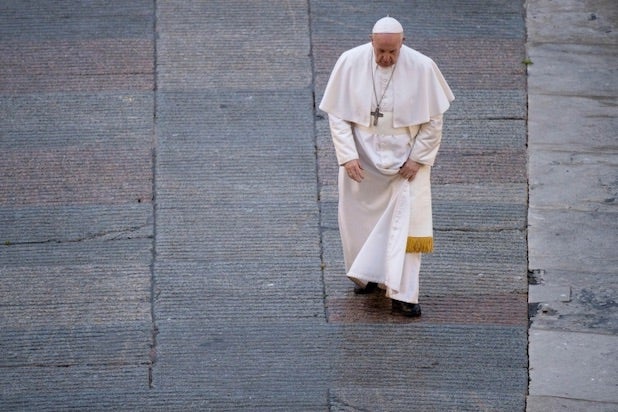 “Francesco,” the new movie about Pope Francis directed by Evgeny Afineevsky, has gotten lots of attention for a scene in which the leader of the Roman Catholic Church speaks out in favor of civil unions for same-sex couples, calling gay couples “children of God” who “have a right to a family.”

But the film, which had its world premiere in Rome last week and its U.S. premiere at the SCAD Savannah Film Festival on Sunday, also depicts Pope Francis making strong points on a variety of hot-button issues that go well beyond gay marriage — and can be seen as a pointed rebuke to President Donald Trump in a number of areas, including immigration and climate change.

“The Pope will not get political,” Afineevsky said when he screened the film for TheWrap in his Los Angeles home prior to his trip to Rome for the premiere. “He can’t tell politicians what to do, because he is not into that type of thing. But at the same time, you can see his positions in this movie, and you can see that he is completely in the opposite direction from Trump. “And yet Trump’s government still claims that they are Christians and Catholics.”

A recent NPR analysis called conservative Catholics a reliable pro-Trump group and a key to his chances for re-election despite the fact that his Democratic opponent, Joe Biden, is a practicing Catholic. The president’s campaign has made a concerted outreach to Catholics this year through events like the National Catholic Prayer Breakfast. U.S. Secretary of State Mike Pompeo requested a meeting with Pope Francis on a recent trip to Rome, but the Vatican declined his request given the closeness to the U.S. election.

“Francesco” covers a huge array of issues, including climate change, immigration, religious and ethnic conflicts, sexual abuse within the Catholic Church and the role of women in the Church. But sections of the movie are inescapably tied to Trump and amount to papal criticisms of his policies.

“It was very important to me that people in the U.S. see this movie before the election,” said Afineevsky, whose previous films include “Cries From Syria” and the Oscar-nominated “Winter on Fire: Ukraine’s Fight for Freedom.” “Trump is trying to divide people and trying to manipulate the Catholic base and the evangelical base. The American people need to see what Pope Francis has to say, to hear him talk about how the Bible says the Lord asks us to welcome all immigrants and refugees.”

“Francesco” isn’t getting wide distribution prior to the Nov. 3 election. But it received substantial attention after the Rome premiere, and the Savannah Film Festival has gone to a virtual format this year, allowing viewers from around the country to see its films for only $5 on its online portal. The film will also screen at the virtual DOC NYC festival in November.

Here are some of the particularly pointed moments in the film from Afineesvky, a Jewish Russian who enjoyed extensive access to Pope Francis during the filming:

• In the first 10 minutes of the film, after Pope Francis declares, “The cries of the Earth and the cries of the poor cannot go on” and says that politics “does not work,” he is shown addressing the U.S. Congress in 2015 to decry the ecological damage “caused by human activity.” Joe Biden and John Boehner, then the Democratic vice president and Republican speaker of the house, sit behind the Pope during his speech — and when he finishes, Biden and the Democrats applaud but Boehner and the Republicans do not.

• In a section on the conflict between Israel and Palestine, which comes about 45 minutes into the movie, Pope Francis says, “You can defend the territory perfectly well with a bridge and not necessarily with a wall.”

• The film then moves to the border between the United States and Mexico, where the Pope says flatly, “A person who thinks only of building walls and not building bridges is not Christian.”

• He makes the same point during a subsequent discussion of the separation of parents and children on the border, calling it “something a Christian cannot do.” This is followed by a clip of Trump talking about the border wall, his only appearance in “Francesco,” which segues to Pope Francis’ statement: “We know that the father of lies, the devil, always prefers people who are divided and quarreling.”

• “He who builds walls becomes a prisoner of the walls he builds,” the Pope later comments.

• Toward the end of the film, a tweet from Pope Francis appears on the screen over footage of the unrest that followed the killing of George Floyd. “We cannot tolerate or turn a blind eye to racism or exclusion in any form,” it begins.

“For Trump, Twitter is his voice,” he added. “I realized that I could have Francis’ Twitter messages to show that there is a great person who is using Twitter. I decided to bring the positivity of Twitter. For me, it was using Twitter to show good vs. evil.”

In general, “Francesco” emerges as both a tribute to the Pope — a man whose attributes, says another Church leader, are “his honesty, his transparency and his great humility” — and a deliberately timed shot at the U.S. president who has not exactly been lauded for having those attributes. And with the confirmation of a Supreme Court appointee, Amy Coney Barrett, whose Catholicism is seen as a sign of her bedrock conservatism, it is also a reminder that Catholics can be downright progressive (at least if you judge on the curve).

“It is really hard, particularly for Francis, to see all the injustice, but he can’t be politically vocal,” Afineevsky said. “But when the movie is seen, I will be politically vocal. And it’s in his crazy mind that everything that goes against him is fake news. Let’s see him try to say that this is fake.”