Emotions continued to ride high for the House of Evangelista in a final chapter of devastation, celebration and a new generation.

On the heels of Angel and Papi’s wedding, Pose resumes with the grim realities of the HIV/AIDS crisis. Pray Tell (Billy Porter), whose days are numbered, admits himself to a hospital, much to Blanca’s (Mj Rodriguez) surprise and frustration. Just when Pray comes to accept his fate, Blanca learns of a potentially life-saving medical trial for those afflicted by the disease. With Christopher (Jeremy Pope) and Nurse Judy (Sandra Berhard), Blanca convinces the hospital head to add Pray to the trial, which has been largely closed off to the Black and Latino communities. Despite her initial hesitation, Blanca also joins the trial. 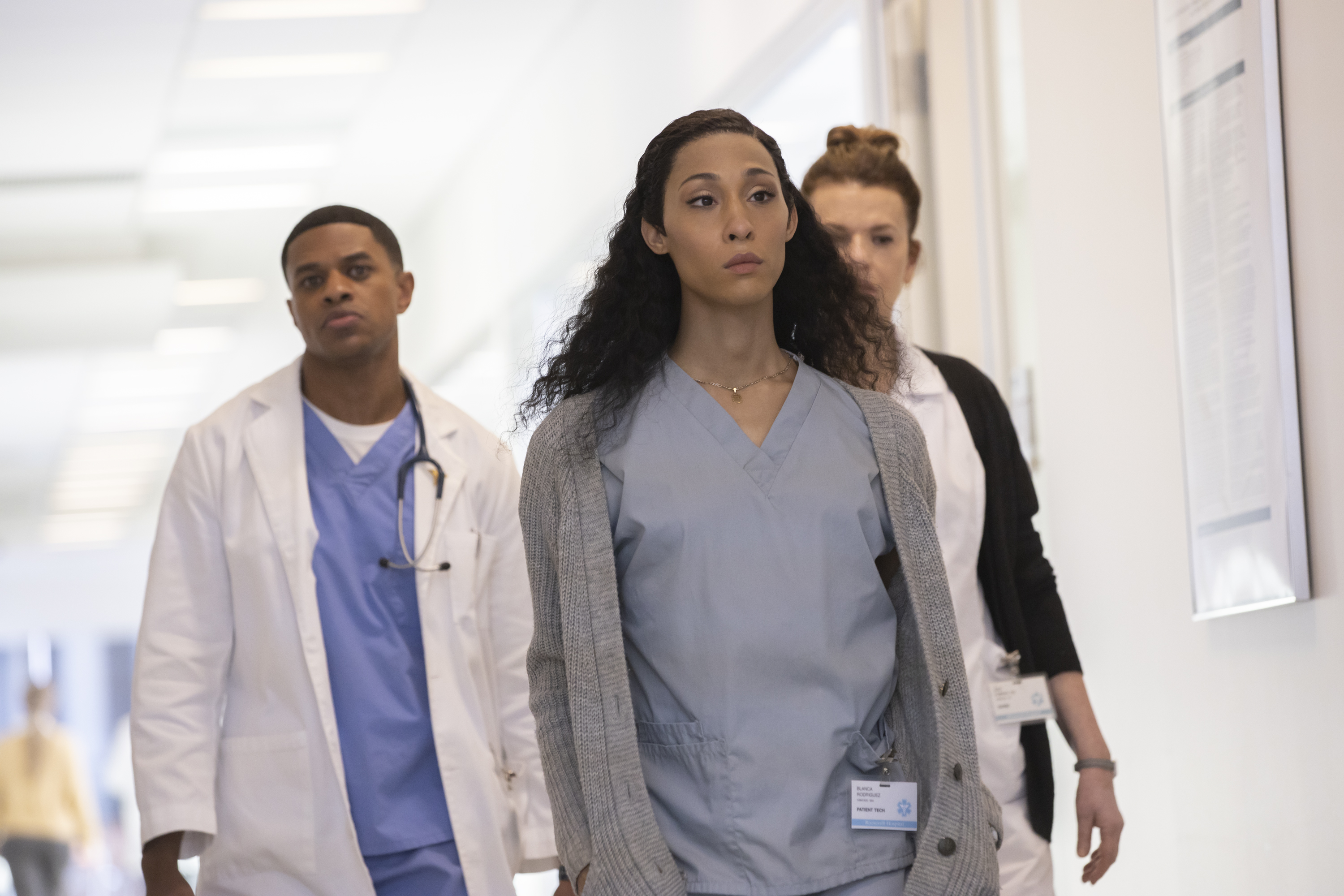 Months in, the friends both feel some excitement for the future, and reunite to complete a panel for the AIDS memorial quilt. “Live Work Pose,” the same words that have echoed in the series’ opening sequence and ushered viewers into the world of ballroom and queer life, shine against black fabric.

Pray and Blanca, however, are the lucky few. Ricky (Dyllón Burnside) reveals a growing lesion to Pray, who sneaks him some of his trial drugs. The Evangelista’s and Pray join ACT UP to protest pharmaceutical companies for the lack of accessible medication. Their displays of resilience and strength bring them to the ballroom, where Pray and Blanca perform one glamorous dramatic lip sync of Diana Ross’ “Ain’t No Mountain High Enough.”

One iconic number leads to another as Aretha Franklin’s “I Say Little a Prayer” sends Pray off into the night, never to wake again. Ricky finds his mentor, friend and ex-lover dead and calls the hospital. That evening, Blanca gathers the rest of the Evangelista family for dinner, where Ricky discovers that Pray gave him all his life-saving meds.

Once again inspired by their grief, Blanca and Judy return to ACT UP as they prepare to spread loved ones’ ashes on the New York City Mayor’s front lawn. Before the big event, Blanca assembles Pray’s closest loved ones to recite his final words. She reads his praises of Lulu’s (Hailie Sahar) strength, Angel (Indya Moore) and Papi’s (Angel Bismark Curiel) unfaltering love and the legacy of the ballroom’s “tribal chiefs.” When asked about what Pray wrote to her, Blanca responds, “there was nothing ever left unsaid between us.” 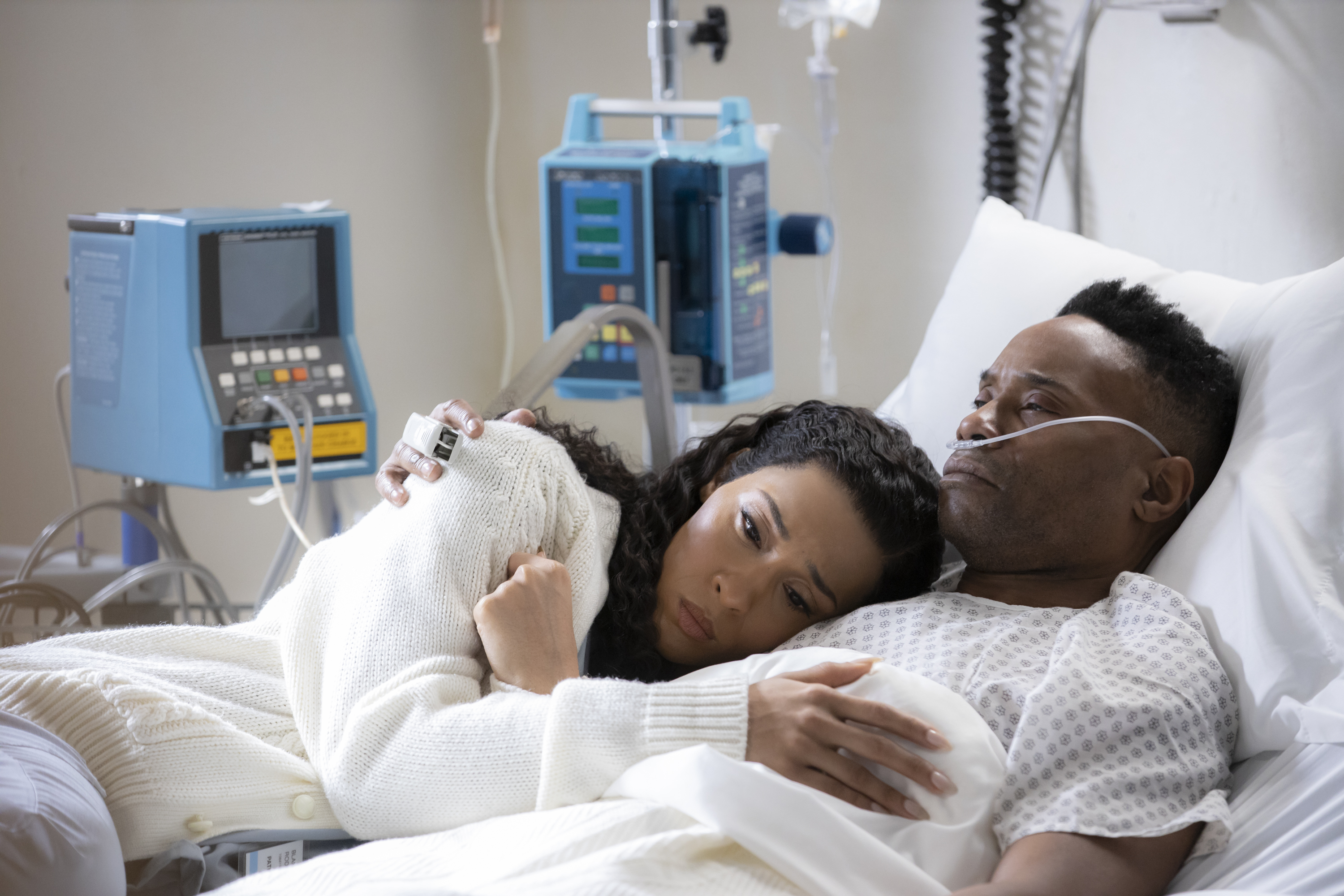 The finale skips to 1998 to come full circle. Blanca, now a registered nurse and married to Christopher, explains to a young woman that her HIV status is not a death sentence. Gracious and nurturing as ever, she invites her patient to a place where she can find community and hope, a.k.a the balls.

Blanca, Angel, Elektra (Dominique Jackson) and Lulu meet for drinks, bash the all-too-white Sex And The City and reflect on how far they’ve come individually and as a group. Now serving nurse, model and business women realness, the Evangelista’s have turned their ballroom fantasies into real-world truths.

The last ball scene serves as a bittersweet curtain call, reuniting all original members of the Evangelista family for one fierce and final kiki. Blanca, who just received the Legendary Mother award, greets her patient and throws her into her first category.

“Welcome to the House of Evangelista,” Blanca says.

Deadline spoke with Pose co-creator and showrunner Steven Canals, who wrote and directed the final episode. He reflected on orchestrating the “perfect” lip-sync number, finding his own truth by way of his leading ladies and more. Read the full interview, which as been edited for length and clarity, below.

DEADLINE: The series wrapped back in March. Now that you’ve had some time to sit with the finale, how do you feel about the final chapter?

STEVEN CANALS: The show, from its inception, was always aspirational, and hopeful. What was so important to me with the show, and maybe more specifically with the finale, was to position all of our characters in a place where they’re no longer solely surviving, but they’re now thriving. That was intentional on my part.

I’m tired of seeing Black and Latin and Asian characters where their narratives are rooted in their traumas, and Pose was an opportunity to not solely rewrite the narrative, but just to recenter it, and to say that we also have happy lives, and we also have joy, and those parts of our experiences should be centered as well.

DEADLINE: What about that scene where Blanca and the other Evangelista ladies reflect on how far they’ve come?

CANALS: It’s important to all of us in the writers’ room to see our leads, our heroes, our ladies coming together to commune. That scene really is about sisterhood. It’s a reminder of family. I love that scene. I’m really proud of where the story ended, and specifically where we leave all of our characters.

DEADLINE: Please break down Pray Tell’s sacrifice for Ricky. What did those conversations with Billy look like and how did his HIV-positive status inform the way you approached Pray’s final moments?

CANALS: That’s a great question. I believe the only person connected to the production that Billy ever disclosed his status to was me. He and I had a conversation at the very, very beginning of filming the pilot. That’s the one and only time we ever spoke about it, and we didn’t talk about his status again until just halfway through filming season three – just before we were about to go into shooting the finale.

Filming this season was very emotional for Billy, because I think he was in some ways reliving traumas. He is an HIV-positive, gay, Black man portraying an HIV-positive, gay, Black character. I think that there were some fears around what Billy felt his reality could be. He was now having to act and express that through the character of Pray Tell. 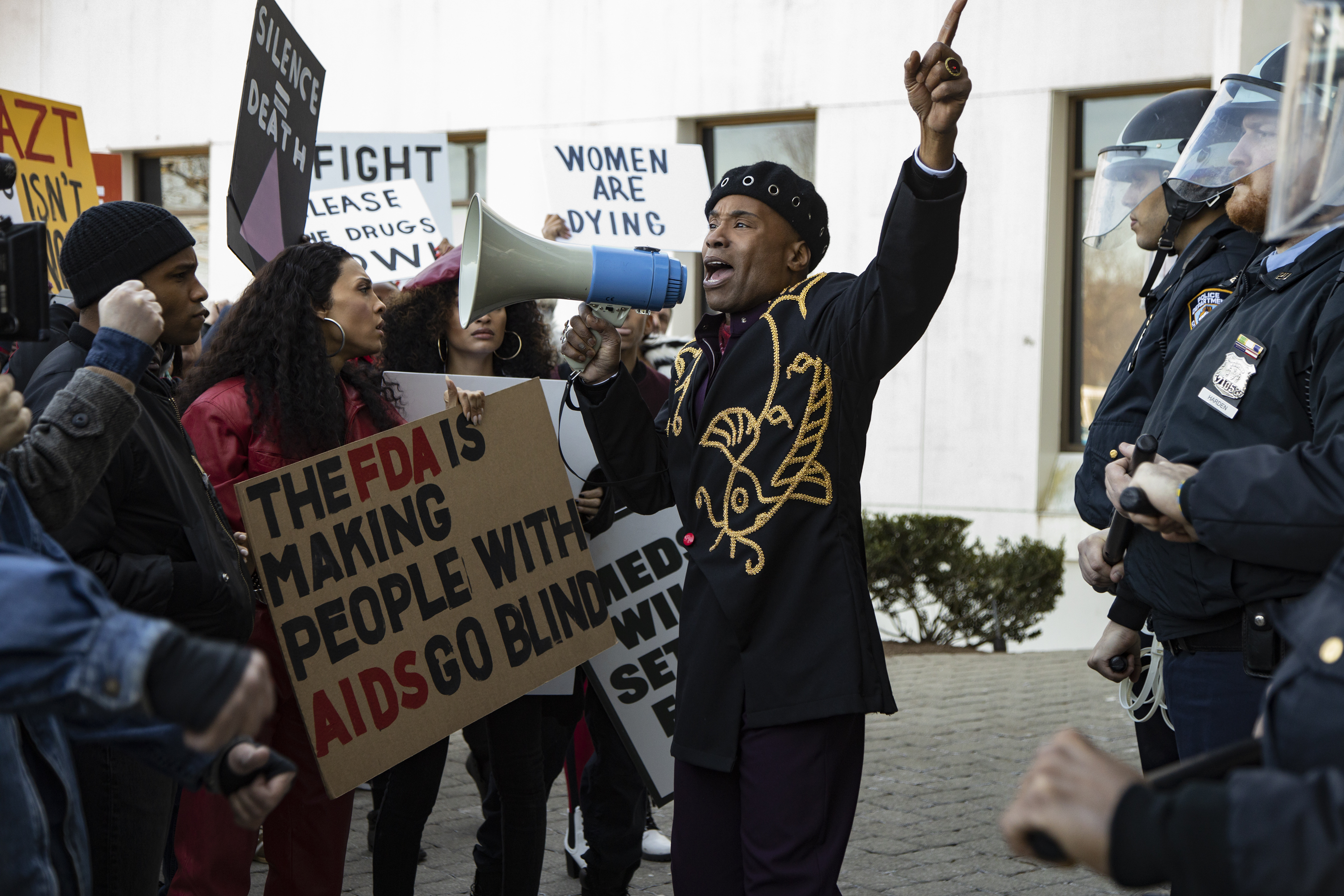 I think that we really tried to make sure that the actors knew that we weren’t taking parts of their real stories and just using it to inform what was on the page. Billy is a force, and an incredible performer, and also a real advocate. I think throughout the process, throughout the journey, if there was ever anything that he was going to be uncomfortable with, I know for sure he would’ve stood up for himself and said that.

DEADLINE: Was the series always going to end with Pray Tell’s sacrifice?

CANALS: Yes. I think it hit everybody at different moments. I believe for Ryan Murphy, it was during the first season that he had that sense that Pray Tell probably wouldn’t make it. The conversations around one of our characters or our characters dying because of their HIV/AIDS diagnosis really began in the second season. The reason that we even began having the conversation had everything to do with grounding the show in truth and in reality.

Covid-19 definitely impacted the ways that we felt, to say, this is a really important story to tell, not simply because of the parallels that can be drawn, but also just a reminder to our audience that that we have always been our own heroes. 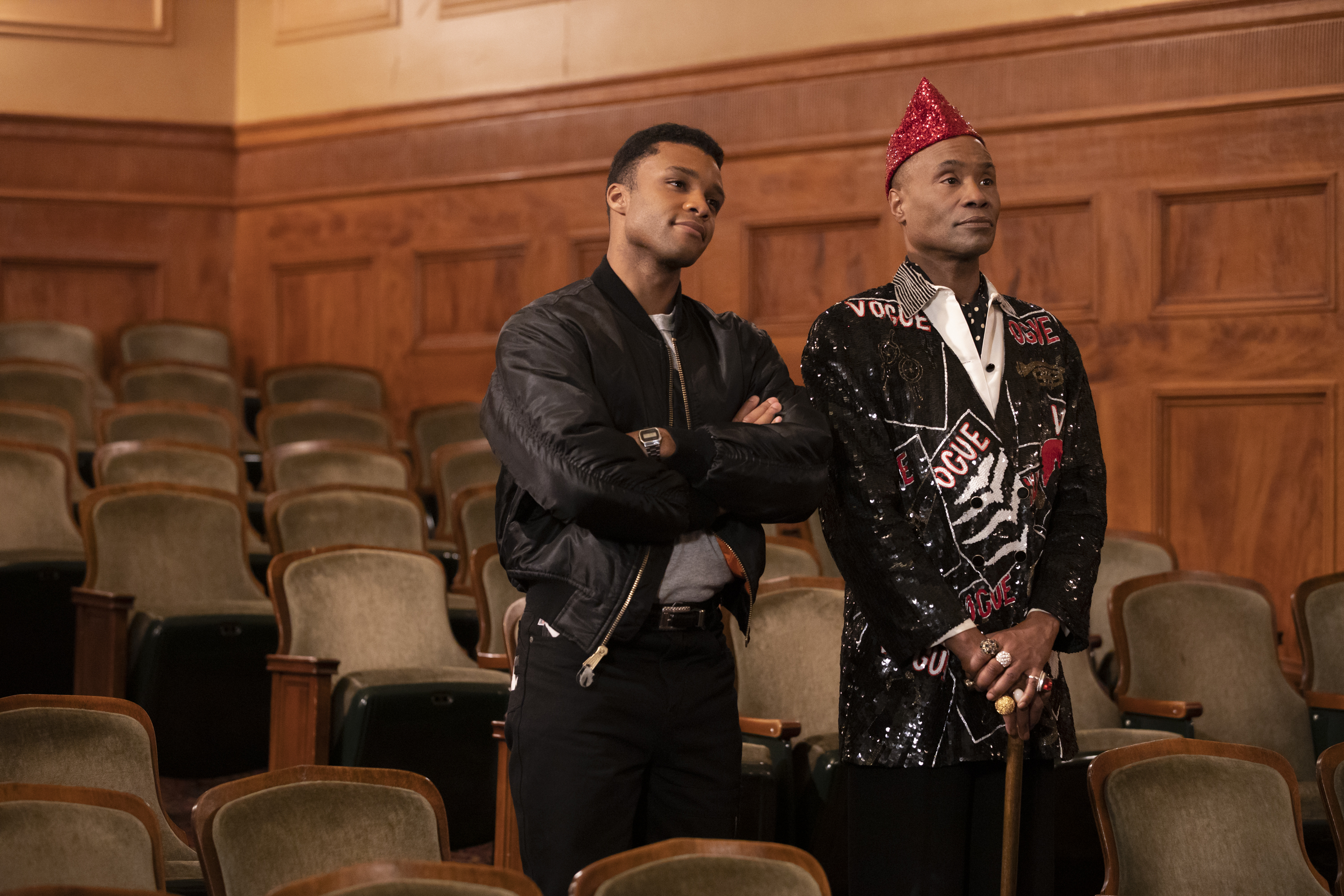 We as queer and trans people, as Black and Brown people, have always had to show up for each other, which is ultimately what Pray Tell’s sacrifice for Ricky is all about. It’s as much about HIV/AIDS and how HIV impacted the community and eviscerated the community, as much as it is about how we, as queer and trans people of color, are constantly having to show up for one another. That sacrifice was about showing our deep connections to one another.

DEADLINE: Pray and Blanca tore up the runway together one last time before Pray’s death. What was the process of putting that final Candy’s Sweet Refrain together?

CANALS: The reality is, nothing really is going to trump Billy and MJ singing “Home” with one another in that first season. In the room, there was a suggestion of, “what if they perform a lip-sync?,” because we do have that category. Ryan was like, “well, if it’s going to be a lip-sync, then it has to be a great duet.” And so, immediately, Janet Mock said, “Oh my god, Ain’t No Mountain High Enough.” Ryan was like, “love that.”

And then immediately, my wheels started turning. I thought, what if it’s the Diana Ross version, which Ryan loved. We loved that as a book ending since Pray Tell and Blanca sang a Diana Ross song in season one.

I gasped out loud, because by that point I knew I was directing the episode, and I was like, “oh my god, can we do it as a nod to her iconic Central Park performance where there was literal rainstorm and she’s still out there singing?” Ryan just started cackling, he just started laughing out loud, and he was like, “that is perfect, let’s absolutely do that.”

DEADLINE: You intended to close off the series with the HIV/AIDS arc, but what other threads would have liked to explore?

CANALS: I think that everything I really wanted to explore, I did. I suppose that there are things that we could’ve been much more on the nose in investigating, like gentrification. But overall, I think all of the specific checklist of things I want to make sure Pose addresses, we did that, whether it’s upfront and in your face, or subtle. So, I feel really good about the story that we have told.

DEADLINE: How do you think your time on this series will of inform the work you seek out or commit to moving forward?

CANALS: Right now I’m in a place where I just want to be really intentional about the next project. I don’t want to pigeonhole myself, and be the storyteller who only tells “important” stories, because that certainly wasn’t the intention with Pose.

I right now am just in a place where I’m taking a step back, and I’m doing another assessment of the television landscape, and very intentionally asking myself, “where are there gaps?” Who are we still not seeing? Who is still not occupying space? Whose story still remains to be told? 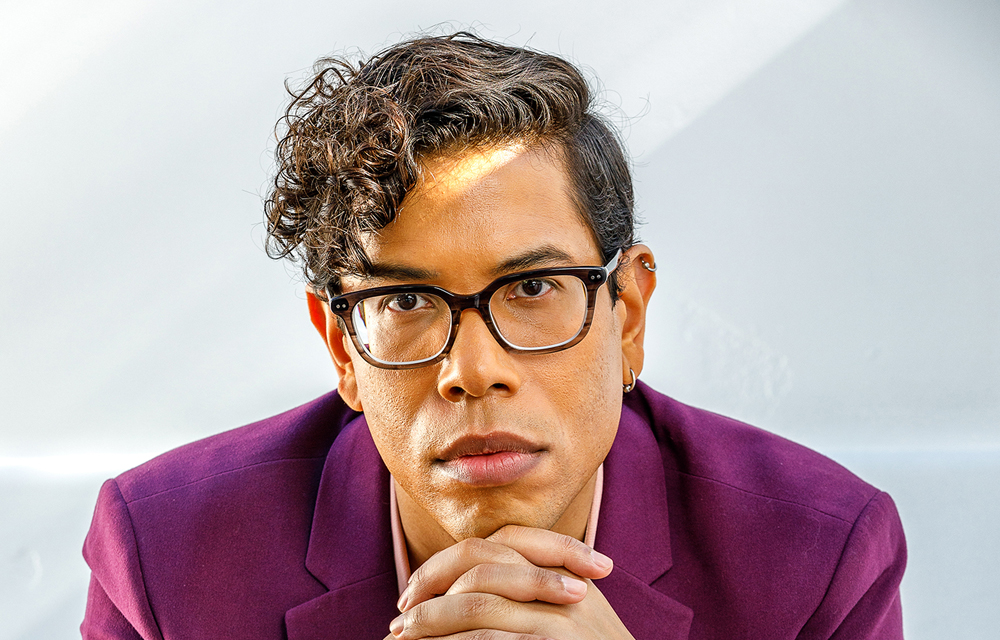 DEADLINE: Looking back on your time on “Pose,” what’s a truth that you’ve come into and when was that moment of realization?

CANALS: I don’t think anyone’s ever asked me that before. Wow. I guess if I’m being really honest, I don’t think that the truth that hit me fully landed until the very end, while shooting our finale. I think that that truth is the following: I, like these characters, should never be afraid to stand firmly in my truth, and speak it out loud. I take so much strength from their strength, and I’m so deeply inspired by them, because they all are just such advocates for not only one another, but for themselves.

Regardless of what you may think about them, in terms of their attitude, and the way that they navigate the world, the truth is I think everybody wants to be as fiercely loyal as Blanca. I think we all want to be as fabulously grounded as an Elektra – “grounded” may seem like an odd word for her, but that’s how I think of her. Or to be as bold as Candy. All these characters they’re so centered, and they so clearly know exactly who they are.

I think for me, the message in spending time with these characters for as long as I have was I can be just like that, too. As long as I always stand firmly in my truth, and I’m willing to speak it, and I’m not willing to compromise, that’s all possible. I think that’s just such an incredible, such a great life lesson to get from them.