Jennifer Aydin thought she was floating. She was just very, very drunk.

“I remember everything until getting into the pool for tequila pong,” the Real Housewives of New Jersey star shares with ET over video chat, recounting the pool party that plays out on Wednesday night’s episode of the show. First teased in the trailer, Jennifer imbibes beyond what she can handle, unable to stand up on her own.

Jennifer says she’ll be experiencing the moment right alongside the viewers, seeing as she remembers very little from the day. What she’s seen so far she finds “hysterical.”

“I threw up that night, like, four times,” she recalls. “And the first time I threw up was when [my husband] Bill had pulled out of [Teresa Giudice’s] house, I threw up on the side of the road and [Margaret Josephs] told me how she was driving past me. And she’s like, ‘Oh my god, I felt so bad. You were throwing up on the side of the car,’ and my first instinct was, did you get it on camera? ‘No, I thought about it, but I didn’t want to do it to you.’ And I was like, no b***h, that is TV gold, honey! You get it on camera and let’s show everybody.”

“If you really want to ask me if I have any regrets about the pool party, it’s only that I didn’t get a spray tan before,” she quips. “I would have appreciated some tan legs and butt crack looks, but yeah, live and learn!”

Jennifer says she has no regrets over the drunken scene, because it was such a rare thing for her. She’s a social drinker who wasn’t drinking during quarantine. When she started filming, she says her tolerance was at an all-time low, which might explain why her co-stars seemed overly concerned. They had never seen her in such a state. 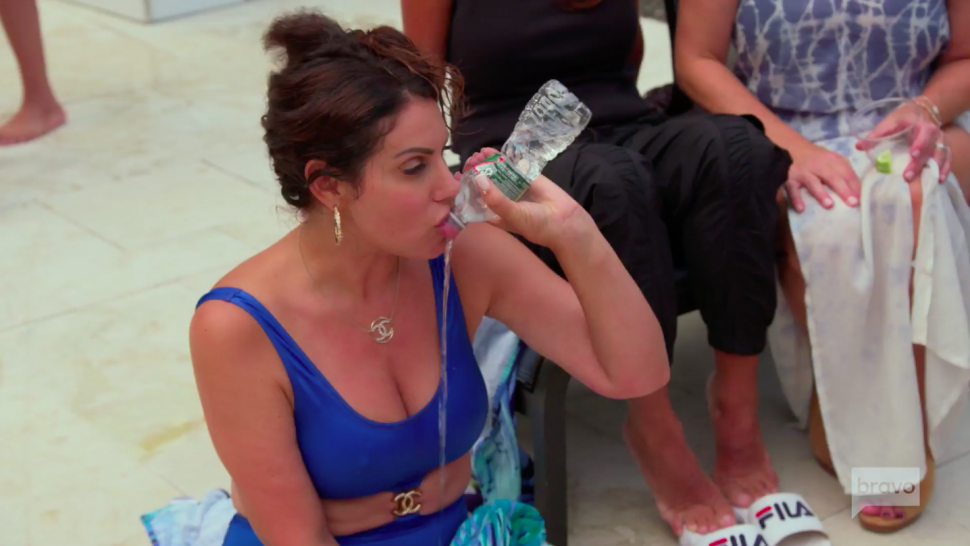 “Every time I see her, she is drinking or inhaling something,” co-star Jackie Goldschneider remarks in the season 11 trailer. “She numbs herself through a lot of her issues.”

That parental drama is the fact that Jennifer’s parents aren’t on speaking terms, but refuse to get divorced. Her dad currently lives at Jennifer’s house.

“They don’t believe in divorce,” Jennifer shares, citing the Turkish family’s religious and cultural beliefs. “They believe that divorce is a sin, and … they believe this is what God planned for me and I must accept it. So, it’s unfortunate because I would love for both of them to be happy.”

“My mom was telling me, ‘If I divorced your dad when I wanted to, none of you would have ever gotten married to somebody from our community,'” Jennifer continues, “because I would have been from a ‘broken home,’ so to speak, and the people from my culture — even if the guy liked me — the guy’s family probably wouldn’t like me because they would say, ‘Oh no, she’s from a divorced family, which means they repeat behaviors, so let’s stay away from her.’ So my mom looks at it as a sacrifice and she did. She sacrificed so much for her children. And I think now, me defending my father just irritates her because in her mind, she sacrificed so much.”

“In her eyes, [it’s] the perception of people,” she adds. “Middle Eastern people care so much about what their culture thinks of them. Like, they almost revolve their lives around it. You know what? Ultimately, these people don’t give a s**t about you anyway. So what do you care?”

Jennifer admits the show has added some strain, with her mother taking issue with the family drama being made public. Jennifer says she wasn’t happy that she was sharing the story with her fans, let alone millions of viewers. 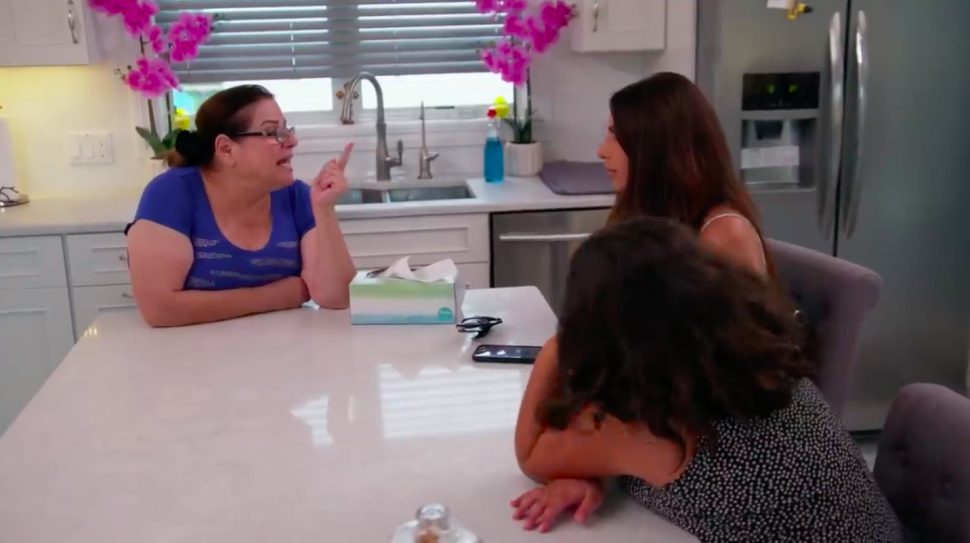 “My mother and I, we got into a fight a couple of months ago and we haven’t spoken since,” she reveals. “She does not answer my father’s calls at all, she wants nothing to do with my father. I think she blames the fight that I had with her on my father — which, it technically was because of my father — but ultimately it’s because my mom just can’t accept the fact that I’m trying to make everybody happy here. And she doesn’t care if I make her happy. She just wants to make sure I don’t make my father happy. And for me, I don’t want to choose sides.”

“My mother has started therapy and we are starting family therapy together,” she explains. “I think that’s going to be a great way for us to integrate back into each other’s lives. That’s probably something I won’t showcase on the show, because it’s my mother’s journey, and I just want to find a way to be able to have a relationship with my mother without my relationship with my father affecting it.”

“It’s always been me and my mom,” Jennifer says. “It’s just this small chapter now that we are evolving to that my dad happens to be more involved, and that’s only because the jewelry store went out of business — our family jewelry store went out of business — causing my father not to have a job to go to every day. It’s very sad for him. He’s dealing with his own trauma and feelings of loss. Then moving to Jersey, people who are elderly, they do not like change. They don’t change.”

When Jennifer’s brother, Michael, opted to move to Turkey, he shuttered the family’s jewelry store. Jennifer then moved her parents from Long Island, New York, to New Jersey to be closer to the rest of the family.

“It’s just like an influx of a change that they were forced to deal with,” she says of why she thinks her parents’ relationship took such a sharp turn. “And you know what? It pissed them off. My mother and my father were both angry, depressed.”

As she works through her familial drama, Jennifer is also caught up in some group drama with her co-stars. She played messenger for season 11 newbie Michelle Pais, who claims Melissa Gorga’s husband, Joe, owes her husband “thousands of dollars” for unpaid work. Jennifer brought the allegation to Melissa, who she fully expected to blow up on her. Instead, Melissa thanked Jennifer for the information.

“I was on pins and needles when I was thinking of how I was going to present it to her because we just went through this whole fiasco with somebody saying a rumor and it didn’t go so well,” Jennifer notes, referencing Teresa and Jackie’s explosive sit-down over cheating rumors and a poorly timed analogy about Teresa’s daughter, Gia.

“I think Melissa and I are in a good place,” Jennifer surmises. “At the end of the day, she doesn’t bother me. I don’t know if she’s bothered by me, but in my defense, I just kill him with kindness. Like let’s kiki up and move on. So I’m hoping that she feels the same.”

The Michelle situation comes to a head at that fateful pool party, where Michelle’s husband confronts Joe Gorga over the supposed missing money and Melissa confronts Michelle over creating a “schmear-fest on my husband.” But Jennifer says Michelle wasn’t trying to start anything. 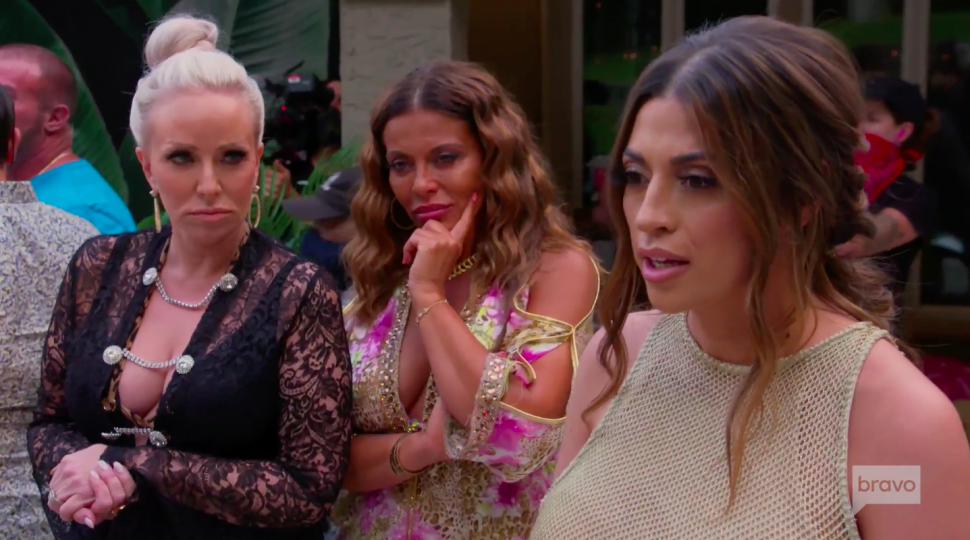 “Listen, Michelle said her truth,” Jennifer offers. “She is not a s**t-starter, but this is relevant information because she is listing Teresa’s house and she felt the need to tell me. And let me tell you, even though Michelle and I had not met up until that point, we had communicated via text and through Instagram. So, I feel like we already had some kind of connection and maybe she felt that she could trust me. I think that she totally told me so that I can go back and tell Melissa, maybe to kind of be the buffer and let her know like, ‘Hey, she thinks you owe her husband money. So maybe you should deal with that.'”

“I think Michelle is a straight-up person,” she adds. “I think she came to state her truth and the way that it was spun, maybe it backfired, but she still stands by her word. And you know what, it’s not my fight anyway.”

Jennifer’s also staying out of Teresa and Jackie’s fight, the aftermath of which rages on, with Jackie opting not to accept Teresa’s invite to the pool party.

“Teresa gave her version of an olive branch,” Jennifer says. “We all saw what Jackie did with that olive branch. So now Teresa’s like, oh, OK. You know what? Now f**k you. So, trademark Teresa … it’s a, sorry, not sorry, type of thing, which I totally get by the way. I totally relate.”

Jennifer opted not to take sides in the feud — she thinks both women were wrong — but Jackie has implied that Jennifer is Team Teresa, saying she’s “desperate to be” Teresa’s friend and does nothing but kiss her butt.

“When Margaret defends Teresa it’s, ‘Oh, Margaret, I think you’re smarter than that. Oh, you’re giving her a pass,'” Jennifer fires back, referencing a chat Jackie and Margaret had about the incident on the show. “But when I defend someone who is actually my friend, that’s ‘kissing her a**?’ No sweetheart, that’s called friendship. So get the memo if you haven’t already gotten it.” 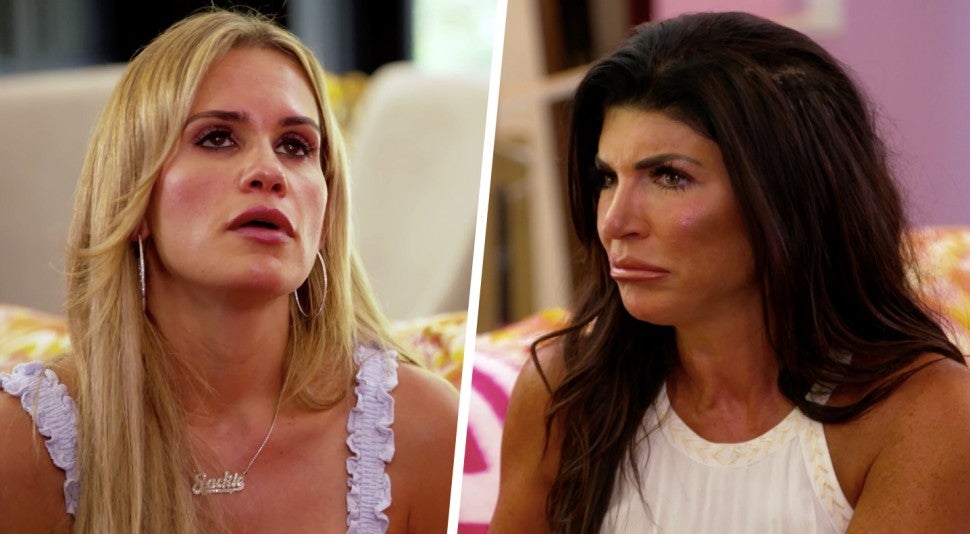 The women will eventually come face to face for the first time since their heated exchange on Margaret’s couch, seemingly at the all-cast trip down the Jersey Shore. The trailer teases multiple arguments during the getaway, with Margaret yelling at her husband over his claim he had also heard cheating rumors about Jackie’s husband, and Joe and Melissa unleashing on Teresa over sticking up for her ex-husband, also named Joe, over them, her brother and sister-in-law — a cheese plate throw included.

“I think definitely Joe Gorga, sometimes I think he deserves to be more of a Housewife than Melissa,” Jennifer muses. “Somebody cut him a check, right? I was like, what’s going on here? When did he get mad? So, that was definitely something embedded in my head. And Melissa throwing the cheese when it’s like, didn’t we vow not to throw s**t anymore? Like, hello, wasn’t it you that said, ‘Let’s promise to not throw anything anymore?’ And then all of a sudden you see some swiss in your hair. It was definitely quite an epic night.”

“Epic” is how Jennifer describes the whole season, and she’s enjoying the extra love thrown her way, too. Viewers are responding to her in a way she hadn’t seen in her prior two seasons.

“Who knew?” she cracks. “I knew, it was just a matter of time. I love it. It’s great. I feel like this season, people are really [getting] to see a lot more of my personality, whereas before …people just didn’t get it.”

And while there are rumblings of a cast shakeup floating around on the fan blogs, Jennifer doesn’t see that happening — and for what it’s worth, the network doesn’t make casting decisions until after a season wraps.

“I don’t think any of us are leaving,” she declares. “Personally, I love this cast. I don’t care for anyone to leave, but if you want to add and shake things up, bring on a b***h.”

The Real Housewives of New Jerseyairs Wednesdays at 9 p.m. ET/PT on Bravo.