Home » TV and Movies » ‘Rogue Hostage’ Review: Everything Must Go

‘Rogue Hostage’ Review: Everything Must Go

In this film from Jon Keeyes, violent men take over a giant store. Nearly all the major hostages are connected, but nothing makes sense. 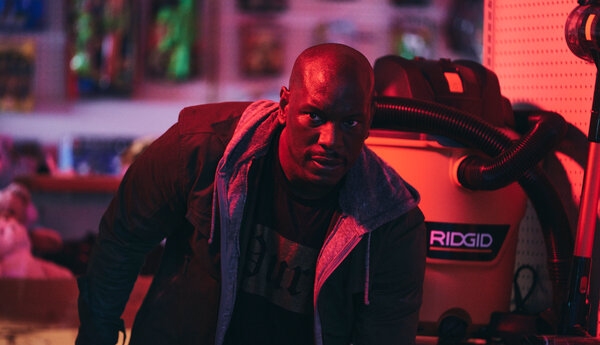 The bulk of “Rogue Hostage” takes place during the siege of a Walmart-like store where customers love buying stuff cheaply, the proprietor, Sam Nelson (John Malkovich), smugly notes. It’s the sort of place where you might expect to stumble on a familiar-sounding but possibly imagined movie like “Rogue Hostage” on the DVD rack. The recycling bin would also do.

On a day when Sam, who is also a congressman, plans to appear at the store, violent men led by Eagan (Chris Backus) hold the venue and its shoppers hostage, with the seeming goal of getting Sam to confess a crime. The motive isn’t really relevant — or at least the director, Jon Keeyes, and screenwriter, Mickey Solis, treat it that way. The tossed-off explanations for the villains’ behavior don’t add up to much.

Nearly all the characters are connected, but nothing makes sense. The trapped customers include the movie’s hero, Kyle (Tyrese Gibson), a former Marine and current officer for child protective services. He happens to be Sam’s stepson, and a foster child he’s worked with, Mikki (Holly Taylor), happens to be a store employee. Mikki spends most of the siege in the security office with her boss, Sunshine (Luna Lauren Velez), who used to tutor Eagan when he was in high school.

Even in establishing physical space — it’s hard to figure out how Kyle subdues a man who is abusive to a child or where he hides in the home goods section, or how Sunshine opens a door without detonating a bomb — “Rogue Hostage” is shoddy work.

Rogue Hostage
Not rated. Running time: 1 hour 27 minutes. In theaters and available to rent or buy on Apple TV, Vudu and other streaming platforms and pay TV operators.