When you see animator Drew Christie’s work side-by-side, you start to see how they come from the same artist. One of the strengths of his contributions to various documentaries — from the sepia-toned inventions of Dr. John Brinkley in Penny Lane’s “Nuts!” to the eerie and ominous Mendocino forests in Hulu’s new series “Sasquatch” — is that each also ends up a key complement to the story being told around it.

His sketch stylings might carry over from project to project, but as with “Sasquatch,” the process begins with ground-up research.

“Each one is very much its own universe. I love doing tons of visual research. Basically, each project is a way to do my own graduate study programming,” Christie said. “Whatever the style or technique or the visual language, I try to cater it to the story in some way. This one, I’d always imagined a very monochromatic blue cast to everything.”

It’s a slightly counterintuitive choice given the heavy greens of the both the marijuana plants and the surrounding hills of Northern California where much of the three-part “Sasquatch” focuses its attention. But Christie was able to marry that baseline of nature with something more atmospheric, drawing on some cinematic inspiration. As would happen multiple times throughout the process, Christie took the seed of an idea from series director Joshua Rofé and cultivated it from there.

“He just gave me that interview footage and he basically said, ‘Do something that’s like a graphic novel come to life,’” Christie said. “When I sat with that footage, I could already see that it was going to be basically like a ’70s thriller. I was getting strong David Fincher kind of vibes. I was imagining cold Kubrickian camera moves and this monochrome world, but with lots of glowing coming from interiors of cabins.”

Christie explained that he usually works with a team, but this project was mostly a solo endeavor that took up much of the first half of 2020. Aside from some late-process continuity revisions from collaborator Gabe Adams, Christie relished the chance to tackle these sequences by himself. 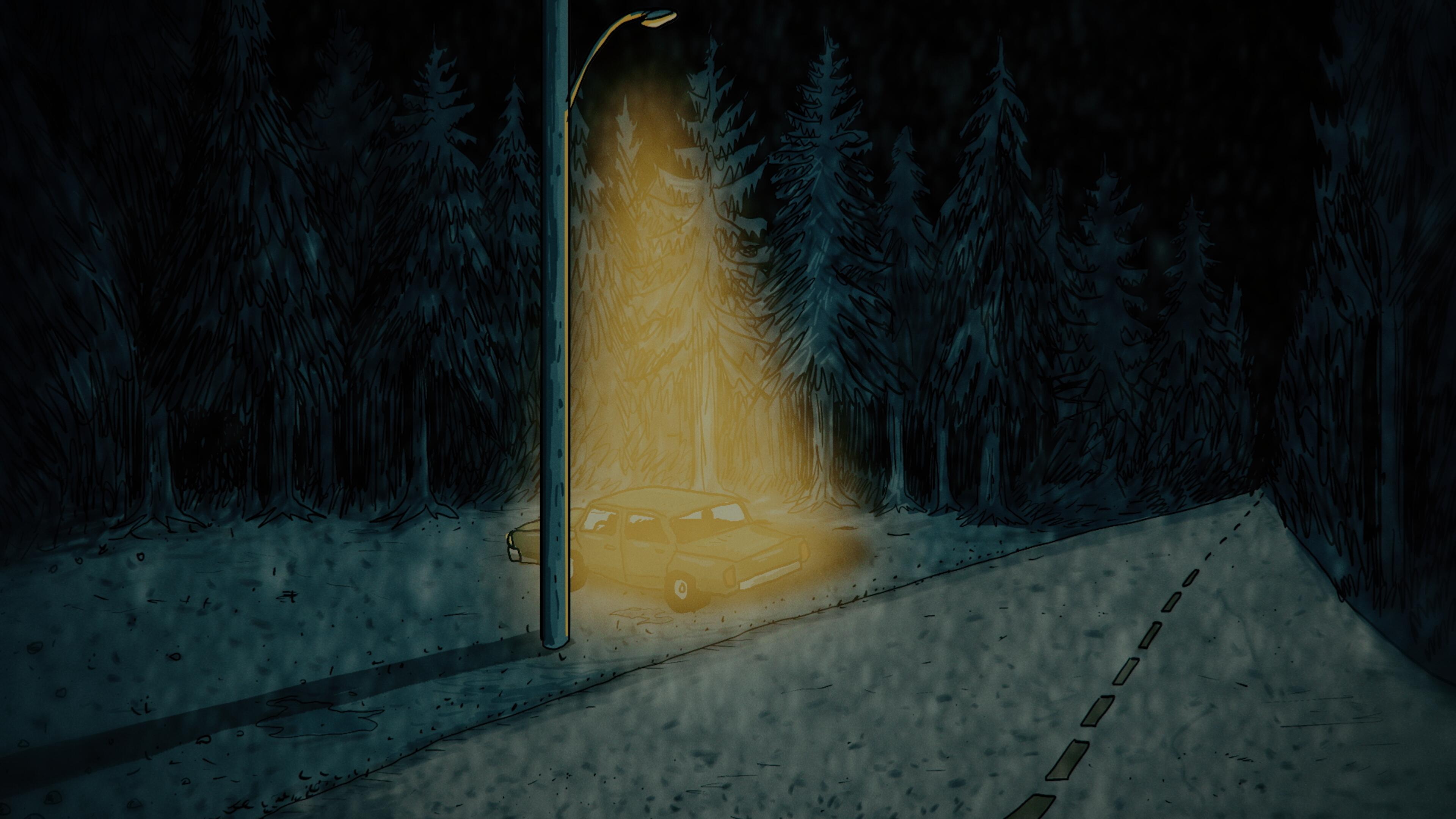 “I got so into this that I really wanted to just do it all myself. I felt that I knew everything about this world, how tall the trees were and how dark the forest is,” Christie said. “A lot of times, you have to do it really fast and there’s no human way that one person could do it in the amount of time that you have. But Josh and everyone scheduled it all in an organized way with generous time.”

There’s something of an added pressure with how animation is used in “Sasquatch.” With writer/journalist David Holthouse constantly reevaluating the details of an overheard story from three decades ago, the series returns to Christie’s depiction of a triple homicide that may or may not have been the work of a creature lurking in the forests beyond. Without photos or tangible evidence, Holthouse’s hazy imagined crime scene shows why his pursuit can be intriguing and difficult at the same time.

“So much of it is obscured through the fog of time and memories. We have stuff out of focus. A lot of stuff in the foreground is silhouetted. Sometimes I wanted these cold pans where you had very little movement, except for blood dripping from a marijuana plant. You’re sort of visually bringing in all these Rashomon-type scenarios,” Christie said.

The closer “Sasquatch” gets to the end, the further away it gets from the Bigfoot allure of its opening. In fact, one of the strongest ways that the animated sequences bolster the thematic ideas of the overall series is how much what you see is obscured or merely suggested. Those shadows conceal deep red monstrous eyes that stand out against Christie’s blue-tinted base.

One of the clearest indications that things aren’t entirely as they seem (and that the series itself is shifting) is one key morph. As more evidence points to a person being responsible for these deaths, Rofé had the idea of an abnormally large cryptic footprint changing into a massive bootprint instead. Making sure that moment hit right way was the product of even more thoroughness.

“There’s a lot of research to be done even on the types of boots and the prints they make. I wanted to get like a blueprint that was like a very Hells Angels-looking blueprint,” Christie said. “At certain times, we wanted you to notice that animation was going on. Other times, it was almost like you’re just being suggested a mood or a tone.”

That bootprint comes hand-in-hand with that emergence of a far more human suspect in the three deaths. Holthouse zeroes in on making contact with the man the series describes only as “Alleged Killer,” but the only frame of reference that the audience gets for what this imposing figure looks like is Christie’s enigmatic illustration.

“Josh just gave me a one sentence description over text of what the Alleged Killer looks like. So I started doing something from there. I did end up seeing a photo of him after. Here’s the weird part: he looked identical to what I had drawn,” Christie said. “He’s much more obscured, so you can’t see very many facial features at all. Basically, I wanted all you could see of him to be from the glow of his cigarette.”

Already at work on his next project, he’s also awaiting the imminent release of another documentary: “The Great World of Gregory Blackstock,” a profile of the Seattle-based visual artist. (The short, which Christie directed, is set to premiere via PBS Voices.)

With “Sasquatch” now out in the world, the series is memorable for Christie in at least one other way. One particular image has maybe the clearest, cleanest path to the screen of anything he’s worked on in his career.

“I went to visit my friend in Alaska and on the flight I did a really rough sketch storyboard of the first sequence. In the same sketchbook I drew a shot of the of the A-frame cabin where David’s standing when he hears the story and then I drew pictures of crazy, tall Sitka spruce trees in Alaska. When I got home, once I scanned it in, I colored it in Photoshop and broke it apart into layers,” Christie said. “I ended up using that as the the final art of the A-frame. My first inclination of this A-frame and the woods from the original sketchbook is what’s in there. That’s a fun thing that’s never happened to me before.”

”Sasquatch” is now available to stream on Hulu.