Shakina Nayfack on the Power of 'Connecting' and Breaking Barriers

When Connecting…, NBC’s newest sitcom about a group of friends staying in touch via video chat during the ongoing coronavirus pandemic, debuted in October, it made history for transgender visibility. Shakina Nayfack, who rose to acclaim with her turn in the Transparent musical finale now plays the out-of-work sports fan Ellis in the ensemble, becoming the first trans person to have a starring role on an American network comedy series.

“I was so excited to play an out trans character on an NBC sitcom because that is the cornerstone of family entertainment,” Nayfack tells ET, crediting the network as well as creator Martin Gero and executive producer Brendan Gall for being open to casting a trans performer and then standing behind the decision. “Appearing as a series regular on a network sitcom is revolutionary.”

Originally asked to audition for Michelle, a role currently played by Jill Knox, Nayfack had to turn it down since the character is married to Garrett (Knox’s husband, Keith Powell) and her partner is not an actor. However, when asked if there was anyone else she could read for, they came back with Ellis.

“When I came on board, I asked them, ‘Is Ellis trans?’” Nayfack recalls. “Then they said, ‘Well, we didn’t write her to be but we hope that she’ll be now that you’re playing her.’” That decision then led to a discussion about what issues and experiences to bring into the show that are authentic to what trans people are going through.

Furthering the revolution is the fact that after Nayfack was cast, the series also added a trans writer, Chloe Keenan, to the team. “I thought that was just such an awesome idea because that’s what trans actors have been advocating for for years,” Nayfack says.

By having Keenan in the writers’ room, there’s less pressure on the actor “to educate the entire creative team,” Nayfack says, comparing it to her experience on the Hulu comedy Difficult People, starring Julie Klausner and Billy Eichner. On the short-lived series, Nayfack not only played the scene-stealing “trans-truther” waitress Lola but she was hired as a consultant. In the case of Connecting…, “because there was a trans writer in the room — I certainly weighed in and pitched ideas — but there was someone else there advocating for authentic representation.” 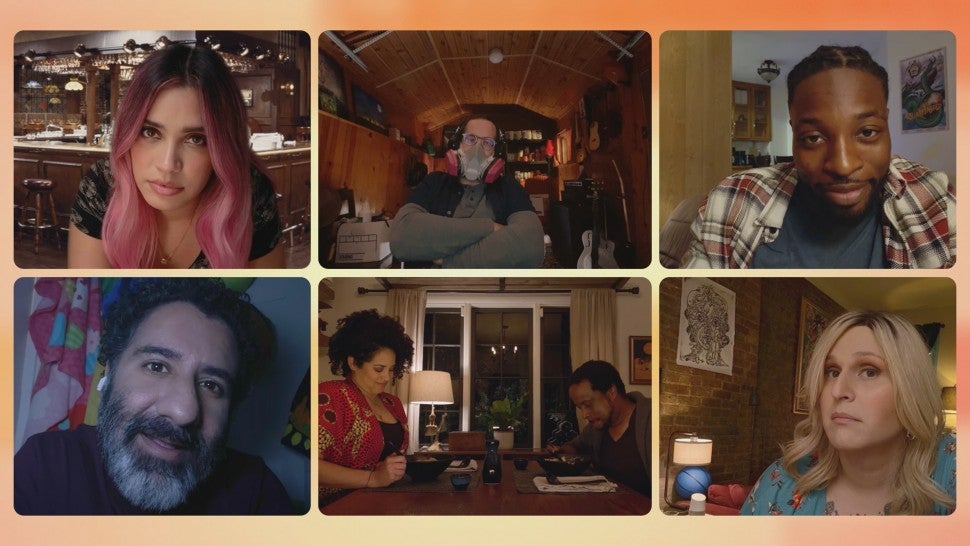 Ultimately, what audiences get to see onscreen, is a fleshed-out character, whose layers are being peeled back one episode at a time. While struggling to maintain steady work during the pandemic, she also enjoys a stiff drink, something not too uncommon right now among many fans watching. But Nayfack promises Ellis will show a softer side. “She is very passionate about keeping the friend group together,” the actress says.

While Nayfack can knock funny lines out of the park and steal any scene with a witty remark, her best performance so far comes in episode three, “Day 78,” when Ellis recalls an emotional time during her transition. “I was starting to feel really sad about being alone,” Ellis says. “It reminds me of when I was starting my transition and I was always afraid of going outside. I just don’t want to go back there.”

It’s delivered with heart, but not too heavy-handed or made to feel like some big revelation about who Ellis is. “I love that Ellis’ transness is just one part of who she is,” Nayfack says. “That line hit so close to home for me, and I definitely burst into tears while rehearsing it. But I wanted to show Ellis strength and wholeness, the light at the end of the tunnel. We’ve seen enough of the darkness.”

While there’s no ignoring the realities of what’s happening right now, from the pandemic, to an increasingly divisive and contentious presidential election, to police brutality and the subsequent cultural reckonings in America, Connecting… shines when it acknowledges it but also provides an escape from all of that.

“My intention through this whole thing has been, ‘How can we help people make sense of what we’ve all been living through and also keep a good sense of humor about where we’re at?'” Nayfack says, admitting it’s a challenge at times. “But everyone on the show feels similarly that was our call to duty. Let’s really address the reality of this experience but let’s do it in a way that makes room for joy and levity.”

While Nayfack hopes to help others heal with the series, she admits being part of it has helped her as well. Recovering from gender confirmation surgery in the spring, the actress had already felt like she was “taken out of the game” before New York City, as well as the rest of the country, shut down due to the pandemic. Then, months later, a resurgence in the Black Lives Matter movement was spawned by the killing of George Floyd.

“So the first few months of quarantine, I was still recovering from surgery and just watching everything happen around me,” she recalls. “And I made this vow that I would not succumb to the fear and anxiety and depression, and that I would figure out a way to maintain some form of hopeful creative output.”

Not only did she find herself busy with acting on Connecting…, but she also took advantage of an opportunity to turn her stage play, Chonburi International Hotel & Butterfly Club, into a recording for Audible. “And it really became about, like, just keep creating in spite of the emotional turmoil of this time and the economic anxiety and all those things,” Nayfack says.

And now that the series is finally airing, Nayfack can see how their call to duty and her own promise to herself are paying off. “It takes a lot right now for people to open up to something new, especially something that addresses the most difficult aspects of our reality,” Nayfack says, adding, “I’m getting inundated with social media messages and text messages. The fan response has been really great so far and the reviews have been great so far, which is really affirming.”