One Show: Brian May discusses playing on Buckingham Palace

Brian May, 73, made an appearance on Monday’s edition of The One Show where he spoke with hosts Alex Jones, 44, and Rylan Clark-Neal, 32. Following the death of Prince Philip, the Duke of Edinburgh, 99, on Friday, the presenters wanted to hear about their guest’s memories with the royals. The guitarist took viewers of the BBC programme back to 2002 when he performed for the Queen’s Golden Jubilee but he went away thinking “she wasn’t impressed”.

The musician explained: “[We performed] on Her Majesty’s roof. I don’t know if she was that impressed at the time.

“It was a life-changing moment. Not because it was facing the fear of falling off the roof [of Buckingham Palace],

“But facing the fear of making a fool of yourself in front of a billion people,” he continued as clips from the moment were played on-screen.

Despite Brian discussing a snub from the monarch, it was clear he had absolute admiration for Her Majesty and would never forget playing for her.

“It still gives me chills, that little rush because the adrenaline was insane and I thought to myself, ‘I am never going to be afraid of anything again’. 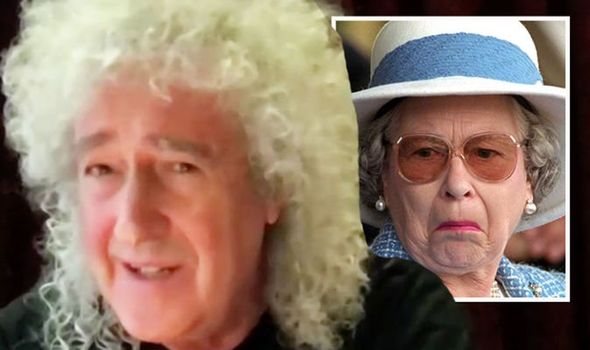 Following on from Brian’s interview and of course, throughout the show, Alex and Rylan paid tribute to the Duke of Edinburgh.

The news was released in a statement by Buckingham Palace on Friday afternoon and it read: “It is with deep sorrow that Her Majesty The Queen announces the death of her beloved husband.

“The Royal Family join with people around the world in mourning his loss,” it continued, with the world going on to react to the loss of Prince Philip at the age of 99.

Prime Minister Boris Johnson, 56, gave a speech from outside No.10 Downing Street and on Monday afternoon, he led tributes to the Duke in the House of Commons.

Don’t know if she was impressed

The leader of the Conservative Party said: “He made this country a better place, and for that, he will be remembered with gratitude and with fondness for generations to come.”

Mr Johnson will not be attending the funeral of Prince Philip on Saturday due to the restrictions imposed as a result of the coronavirus pandemic.

Only 30 mourners will be allowed inside the St George’s Chapel at Windsor Castle this weekend as the Royal Family and the world pay their respects.

At 3pm, a national silence will fall for one minute as the country reflects on the extraordinary life of the Duke.

Prince Harry, 36, has flown back to the UK from America to attend the funeral and he is currently observing a period of isolation in line with coronavirus rules.

His brother, Prince William, 38, the Duke of Cambridge, has also paid tribute to his late grandfather in the last few hours.

The father-of-three said: “My grandfather’s century of life was defined by service – to his country and Commonwealth, to his wife and Queen, and to our family.

“I feel lucky to have not just had his example to guide me, but his enduring presence well into my own adult life – both through good times and the hardest days.”

“I will always be grateful that my wife had so many years to get to know my grandfather and for the kindness he showed her,” he continued.

“I will never take for granted the special memories my children will always have of their great-grandpa coming to collect them in his carriage and seeing for themselves his infectious sense of adventure as well as his mischievous sense of humour!”

The Duke’s death comes just two months before he was going to turn 100-years-old in June and just months after he had received his vaccine against coronavirus.

Prince Philip’s legacy will live on through his wife, children, grandchildren and great-grandchildren.

The One Show airs weekdays at 7pm on BBC One.