Home » TV and Movies » Snowpiercer cast: Who is in the cast of Snowpiercer?

Snowpiercer cast: Who is in the cast of Snowpiercer?

Snowpiercer takes its cue from the cult 2013 film of the same name directed by Oscar winner Bong Joon-ho as well as the French graphic novels. The highly anticipated dystopian drama Snowpiercer will be making its debut on Netflix on May 25 with the first two episodes available to watch with the remaining instalments dropping weekly. US network TNT started airing the show from May 17, so there will be lag between American and British broadcast.

Snowpiercer presents a bleak, post-apocalyptic vision of the future in which the Earth is locked in an eternal winter.

While the last remaining survivors of the human race all live on board a train which travels around the world.

Much like the film, there’s a strict class system which keeps this system moving and everybody in their place without any sort of social mobility. 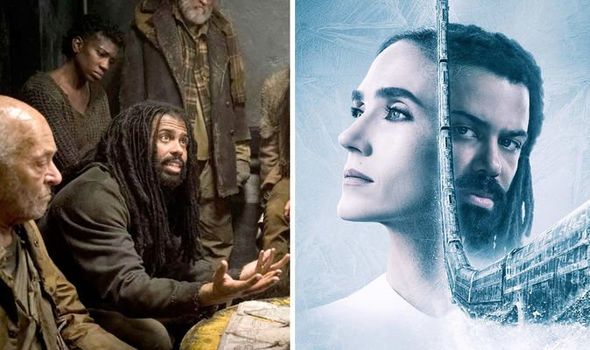 Who is in the cast of Snowpiercer?

Hollywood actress Jennifer Connelly takes on the role of the sinister Voice of the Train as well a first-class passenger Melanie Cavill.

Connelly is no stranger to viewers having started off her career as a child actress in the likes of Labyrinth and Once Upon a Time in America.

She’s best known for roles in movies including Requiem For A Dream, A Beautiful Mind, The Rocketeer and Blood Diamond.

Snowpiercer marks a return to the small screen for the Tinseltown A-lister, who’s better known for her movies than television work.

Connelly was previously in the television show The $treet back in 2000.

She will next be starring in the Top Gun sequel Maverick opposite Tom Cruise.

Actor, singer, producer and writer Daveed Diggs portrays Andre Layton, one of the people at the back of the train and in the lower classes.

He will be coming up against Cavill as the delicate status quo will be rocked and the lower classes rise up.

Diggs has previously starred in The Get Down, Unbreakable Kimmy Schmidt, Black-ish and Undone.

According to IMDb, he’s got a slew of projects in the pipeline including the big screen outing of Hamilton, TV show The Good Lord Bird and voicing Sebastian in Disney’s live action version of The Little Mermaid.

Mickey Sumner takes on the role of Bess Till, who controls the brakes on the train and gets caught up in the elusive force maintaining the class balance onboard.

Actress Sumner has featured in Frances Ha, American Made and Marriage Story as well as a role in TV series The Borgias.

British actor Iddo Goldberg is Bennett, one of the original engineers who built the train and knows more than he’s letting know.

Goldberg has previously starred in Peaky Blinders, The Zookeeper’s Wife, Salem, Get Shorty and the most recent series of Westworld.

Playing the train’s chef Jinju Seong is Susan Park and is very much part of the upper echelons of this society.

Park has featured in Fargo, Vice Principals, Fresh Off the Boat and Briarpatch.