What a difference a week makes.

Last week’s episode, “Far From Home,” stumbled in presenting the new reality of the 32nd Century for the Discovery crew and left us feeling it was just a filler episode. This week’s, “People of Earth,” is a needed step up. This show works best when Burnham is interacting with other members of the crew, and the fact that she was separated from them in the first two episodes didn’t serve its storytelling strengths, even if Sonequa Martin-Green was far more comfortable carrying her own solo episode to kick things off than the rest of the crew was in giving life to Episode 2.

We begin with the end of the premiere ep in “People of Earth.” Before Burnham finally discovered Discovery, she left a message for them that attempted to explain their new reality. This meant we got our first actual glimpse of The Burn. A group of Starfleet ships hanging in space, apparently just bunched together yet not going anywhere — when does that ever happen? — blow up. The dilithium that powered the warp core of each spontaneously ignited: everywhere, all over the galaxy, and all at once. It’s a funny thing… these ships don’t look nearly as advanced as we’d expect them to have been in the 31st Century. The little glimpses that we got of this time period in “Voyager” (yes, yes, that was the 29th Century) and “Enterprise” made it seem far more advanced before The Burn. But I suspect this is more the “Discovery” design team pulling a USS Zheng He on us.

Burnham’s message continues and she talks about how she’s become a courier like Book (David Ajala). “I’ve had to accept I may never see you again,” Burnham tells her crew. “You can love someone and let them go.”

The Burnham we see here is so liberated compared to the repressed wannabe Vulcan we’ve seen in the past. Martin-Green told IndieWire that jumping to the future was the culmination of her entire story in the first two seasons, which was ultimately about her letting go of the past — including her Vulcan inhibitions — and embracing her humanity through an act of sacrifice. I can’t say enough about how strong her performance has been in these episodes. She’s made it very clear she’s created a new life for herself. Burnham and Book don’t appear to be a couple, but she obviously cares for him, and for the first time ever has the chance to define who she is rather than others defining her for her.

Burnham discovered a transmission from Admiral Senna Tal on Earth 12 years ago. ‘Starfleet lives on,” it said. So she and Discovery need to go to Earth and see if they can find Federation headquarters. The plan is to approach Earth at sublight and act like they were stranded by The Burn a century ago, with the people now staffing Discovery being the descendants of the original crew.

Meanwhile, there’s some protocol to get through. Saru wants to offer her the captaincy. Burnham declines, instead flattering Saru with “You are a captain in the truest sense of the word.” This shocks the Kelpien, and he’s the first of several crew members to note how changed Burnham really does seem. “You do seem lighter somehow,” Tilly tells her. This relationship between Burnham and Tilly is such a bedrock for the show. One of the moments in Season 2 that showed Burnham’s real growth was after an exchange with Tilly that flattered the ensign, Burnham simply gushed, “You’re amazing.” Take that, Surak. 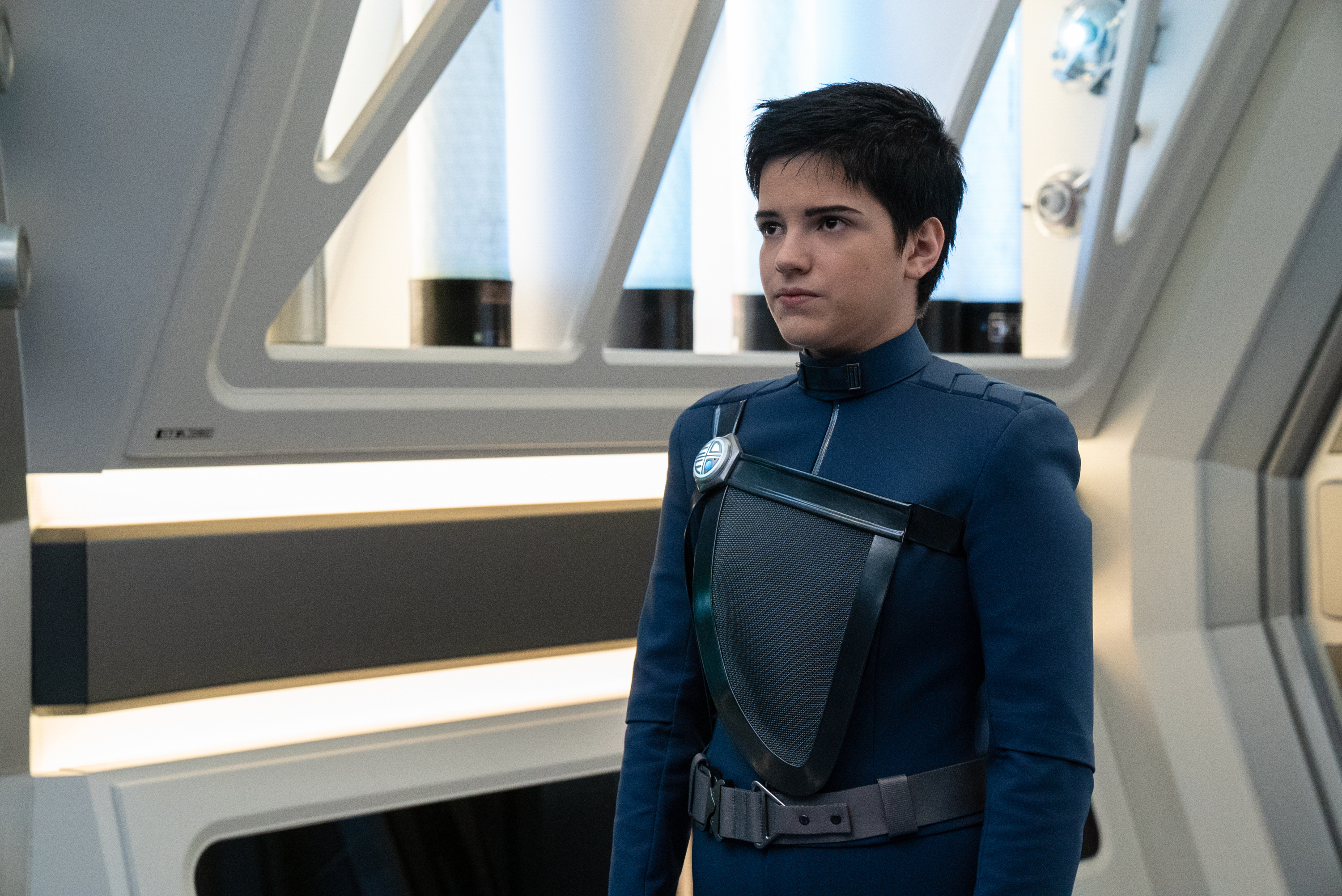 There are a lot of unresolved emotions for the crew to work through, too. Tilly opens up about the sadness they’re all feeling at having left everything they ever knew behind. “We haven’t even had a chance to say goodbye to the friends we lost,” she says. “They got breakfast, were late for work, had kids, I mean they had whole lives, and they’re gone. They’ve been gone for centuries.” She’s hoping there’s something on Earth they recognize.

Who needs dilithium when you’ve got a sporedrive? Discovery jumps to the outer edge of the solar system, flies past Saturn, and then, before them, Earth. But a very different Earth: “A viewscreen? How quaint,” Capt. Doya of the United Earth defense forces tells them when they hail. She’s suspicious, rather than welcoming. She notes that their ship is of 23rd to 25th Century design, so how could they still be functioning? Fearing Discovery is a raider ship she beams troops aboard to take control immediately.

So much hostility! Well, the Federation and Starfleet haven’t been on earth for 100 years. And since then Earth has learned to be self-sufficient, reverting to its old status as United Earth. One wonders what the Federation really means if it isn’t a governing body for its member planets but just some rump state out in the unknown with authority over nothing… Is all they do just exploration now? But how can they when dilithium is so scarce? Remember, the Starfleet “officer” Burnham met in Episode 1 said he detected “two Federation ships” in his sector. What are those ships doing? Are they just trying to make it back to Earth at sublight? One interesting footnote to Burnham’s message earlier, that I don’t think had been previously established, is that even before The Burn dilithium was “drying up” around the galaxy.

The crew learns Senna Tal died two years earlier aboard an outbound ship. Apparently he knew where the Federation had gone. Being on Earth and having ships with any dilithium around just made Earth a target, so they all left.

But one of the United Earth officers, a teenage inspector named Adira (Blu del Barrio) is clearly under the Federation’s thrall. She wants to explore every nook and cranny of this strange Starfleet ship. She even discovers its mysterious spore drive, which could hold the key to humans traveling with ease around the galaxy again. 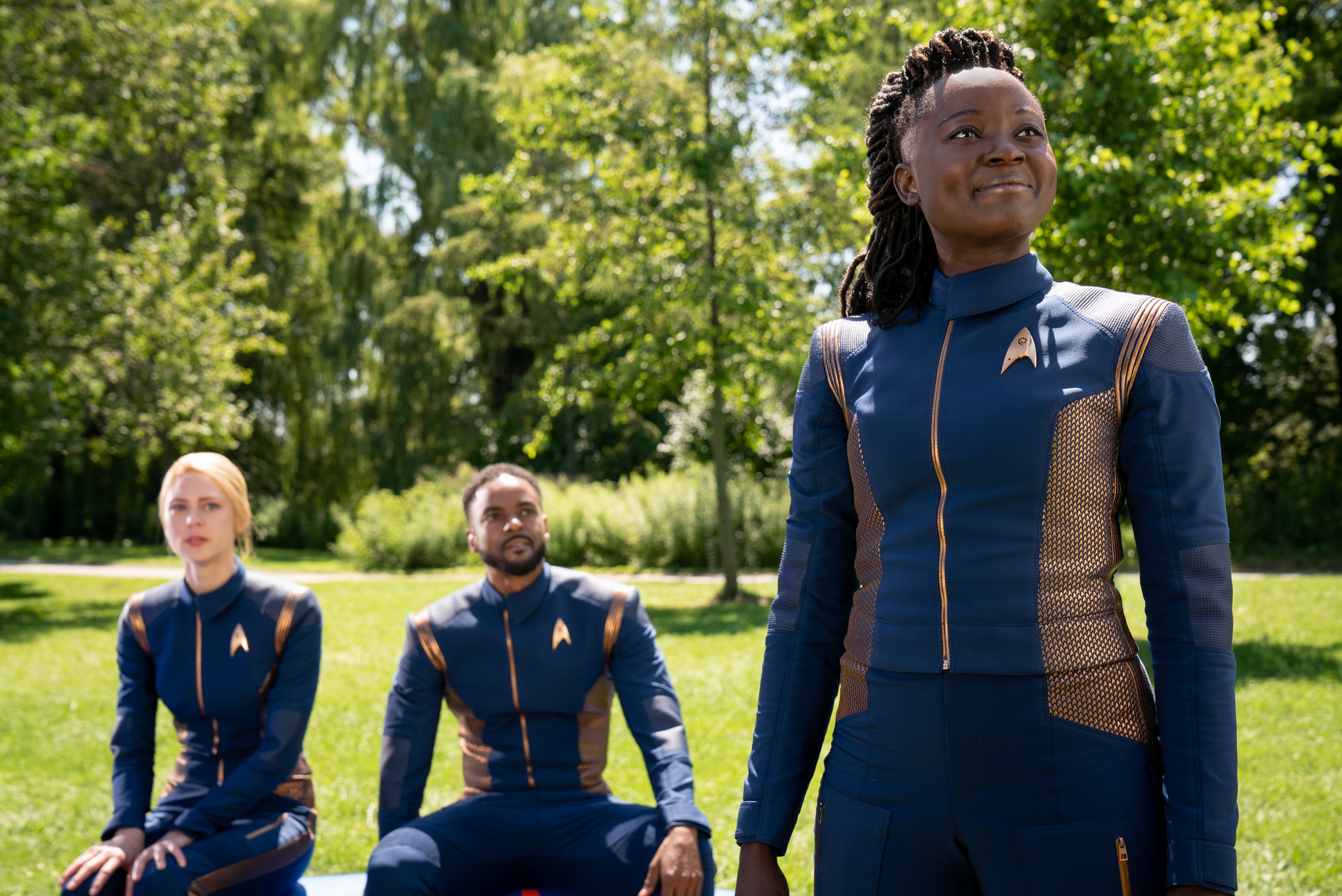 A welcome visit to an Earth that’s somehow very similar, even as most of what the Discovery crew knew and loved is gone.

This isn’t a time to just think about Starfleet glory days, though. Earth is being threatened by a pirate raider named Wen, and much like a villain of the week on “The Original Series” he wears a terrifying mask that makes him look like a particularly esoteric extraterrestrial, but is actually an ordinary human underneath. He’s after Discovery’s dilithium. A showdown ensues and he’s revealed to be a human from the colony on Titan, which was abandoned and left to its own devices when Earth suddenly veered toward isolation. The humans on Titan have been living in poverty ever since and want a piece of their fair share.

This sounds like a gateway to some compelling political commentary, right? Sadly, it isn’t. “People of Earth” whiffs on its opportunity to say something about isolationism, and pretty much gives it the “both sides” treatment.

Instead, we get solid character moments, like Book calling out Burnham for giving an entirely monosyllabic ultimatum to Wen: “We have what you need. We want to make a deal. Scan our ship.” He says he loves when she does that. A great moment, but indicative of a show that opts for fun banter when it could go deep.

But we do get an emotional moment at the end, when, quickly realizing the error of their ways, the Earth forces agree to help Wen and allow the Discovery crew a quick visit to Earth. Tilly & Co. visit the old Starfleet HQ — what exactly is it being used for now? — and hug a tree they all loved that has now gotten much, much bigger with the passage of 930 years.

Adira finally figures out the Discovery crew are time travelers and she asks to stay with them: she’s human but has a Trill symbiont inside her — that belonged to Adm. Senna Tal! He was a Trill, and Adira has his memories. She has the knowledge within that points to where exactly Starfleet has gone.

It should be a fun journey ahead.