This May, consumers spent a bit more time availing themselves of streaming services than watching traditional broadcast-TV, a nifty new infographic from Nielsen shows.

Dubbed “The Gauge,” the graphic below shows that 26 percent of consumers’ time was spent with streaming content versus 25 percent watching broadcast-TV. (The aggregate of all cable channels still leads with 39 percent of the viewing pie.)

The streaming slice is further broken down by service, with Netflix and YouTube (including YouTube TV) easily besing Hulu, Amazon Prime and 19-month-old Disney+.

“Other TV” includes VOD, streaming through a cable set-top box (not credited to the individual streamer’s count), gaming, and other devices (e.g. DVD), while “Other Streaming” is any unlisted, high bandwidth streaming to a television. 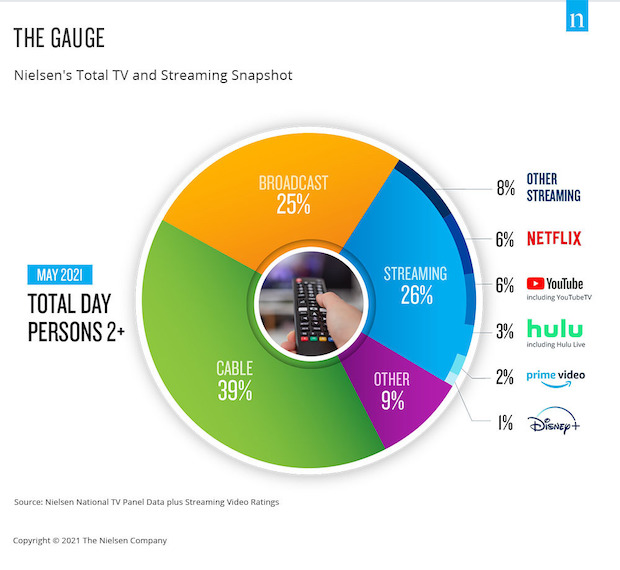 “The past year has categorically shifted the television viewing landscape,” says Brian Fuhrer, SVP, Product Strategy at Nielsen. “Even as people begin to dive back into their pre-pandemic activities, based on the changes many made to enable streaming coupled with the variety of newly introduced services, we expect people to keep sampling and exploring their options. Maybe just as importantly, as production ramps back up, new content will enter the space, driving additional traction.”

Nielsen’s measurements are drawn from a sample of nearly 100,000 people nationwide for broadcast-TV and cable television, and a recently and exponentially increased 14,000 households for their Streaming Video Ratings.

Are you surprised that broadcast-TV is even as close as it is to streaming?