Fans of BBC hit series Strictly Come Dancing brought out the glitter as the series aired its first live show last night (October 25). There were fears the coronavirus pandemic would scupper plans for the annual television extravaganza but Strictly producers brought the show back to screens against the odds. The series saw 12 couples strutting their stuff for the judges in Week One of the show.

Once again, a roster of celebrities from across music, acting and sport showed off their footwork with their professional dancing partners.

There weren’t any new professionals joining the Strictly family this year and instead there were some former faces missing from the line-up after they departed from the show.

Among those to have departed from Strictly included AJ Pritchard, who announced in March this year he was heading for pastures new.

He was not the only one to be walking away from the show after veteran and Glitterball champion Kevin Clifton also confirmed in early 2020 he was exiting. 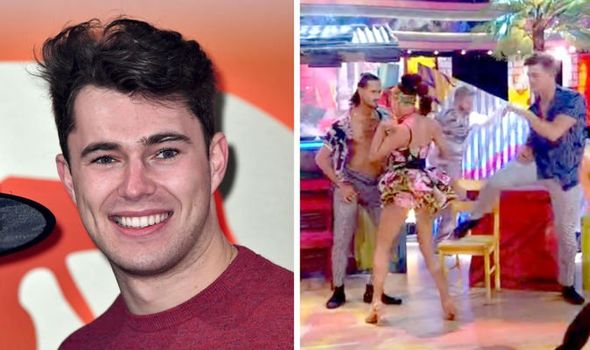 Both AJ and Kevin have new projects with the former teaming up with his brother and former Love Island contestant Curtis Pritchard as they present together.

Although Curtis has done the Irish equivalent of Strictly, he has never appeared on the British edition.

Therefore, there was some confusion among Strictly viewers last night when audience members watching at home thought they’d spotted Curtis in the group dance.

As usual, the show opened with the professionals performing a group dance but one of them appear to look like Curtis.

Many took to social media to query whether Curtis had unexpectedly signed up with one person posting on Twitter: “Why is Curtis Pritchard on strictly get him OFF my screen.”

A second viewer said: “I thought the new pro in blue was Curtis Pritchard for a minute and was so confused #Strictly.”

A third person wrote: “Strictly is back, so it’s officially autumn. Let’s pretend the world outside is normal for an hour or two.

“Jamie wasn’t as bad as I feared he might be! (Also Curtis from Love Island is a backing dancer. What happens when two reality TV shows cross the streams?).”

Another added: “Was it Curtis off of Love Island in that group dance? #Strictly.”

On closer inspection though, it turned out the backing dancer on the show simply had hair similar to Curtis which had caused the initial confusion.

Instead, Curtis and AJ are going to be foraying into television presenting together.

The Pritchard brothers also have their own show called AJ & Curtis’ Big Night Out which will see them putting their dancing skill on display.

They have a list of tour dates across the UK in 2021 with fans able to purchase tickets now.

AJ and Curtis also hosted a segment on ITV’s Daytime show Lorraine which show the pair spreading the word about dance in 2019.

They are hoping to continue their hosting stints together after initially finding success on their respective dancing shows.

The siblings have previously appeared together on a celebrity edition of Channel 4’s reality series Hunted.

Strictly Come Dancing continues on BBC One next Saturday at 7.15pm