Amid all the high-pressure drama and corporate warfare being waged this season on Succession, Cousin Greg is having a pretty nice season, isn’t he?

The lovably awkward beanpole has navigated some rough waters in Season 3 — he did lose his grandfather’s massive inheritance to those greedy thieves at Greenpeace — but he parlayed his role in Kendall’s rebellion into a cushy job in Waystar’s theme park division after coming over to Logan’s side. Plus, he worked up the nerve to ask out Kendall’s PR girl Comfry last week… and she said yes! (Read our full recap here.) Well, OK, Tom is still weirdly obsessed with him, but you can’t have everything.

With just two episodes left this season, TVLine chatted with Nicholas Braun about Greg’s journey this season, his love of rum and Cokes and the status of his friendship (?) with Tom. Plus, he drops a few tantalizing hints about the Roys’ upcoming trip to Italy.

TVLINE | At times, it seems like the other characters sort of envy Greg for his innocence, like he doesn’t have to worry about the things they have to worry about.
Yeah, I haven’t thought about that, that anyone would envy anything about Greg.

TVLINE | Well, even at the end of this week’s episode, Tom was like, “You shouldn’t be happy, I should be happy.” It’s like he envies Greg for just being on a simpler level than him.
Yeah, that is a great example of that. I guess Greg enjoys things more than anyone. So he’s met a girl, and he’s really excited about it, and yeah, he’s taking a bold move to ask her out. Greg is not cold to this kind of stuff like the rest of the family is. He actually celebrates victories. So yeah, maybe that is enviable, in a world where you have to cover up any positive emotions. 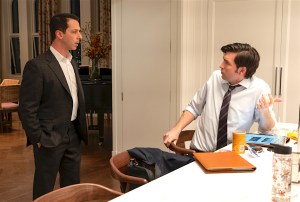 TVLINE | How does Greg afford a $40,000 watch, exactly? Is he going to have to just sell it at a loss?
I think he has made enough. I see him with, like, a six-figure salary at this point. Maybe he’s at the 200K a year salary. So I think there’s enough in the bank… but, like, barely. I don’t think there’s much left after that. He’s going to be tightening up that budget. He’s not going out for dinner for a little bit. Cooking at home for the next couple of months.

TVLINE | A few weeks back, Greg went toe-to-toe with Logan in a negotiation. What was Greg’s mindset going into that meeting versus his mindset leaving it? Did the rum and Coke kind of cloud his judgment?
Yeah, he gets drunk, very quickly. He didn’t eat that day. It was morning, an empty stomach. That was like a 10 am rum and Coke. Your body’s not warmed up. So one or two sips hit him really hard. I feel like that scene had some bold Greg… like, coming in with a strategy and bravery, and yet he also had to kind of fold to Logan, but I guess he didn’t. He left that meeting without signing the papers. Yeah, so successful meeting, I think, for Greg. Successful negotiation. And he does get what he wants, which is deputy of Brightstar Buffalo operations. When he tells Kendall, “I’m going over to your dad’s place,” Kendall probably knows his dad… like, it’s Greg. He’s swayable. Greg knows, too, at that point, things are faltering a bit. It’s not as solid as it was on the plane ride over to the press conference. So yeah, he’s gotta swing over to Logan’s side.

TVLINE | How did rum and Coke become Greg’s drink of choice?
That’s the first time I’ve drank that in the show.

TVLINE | You don’t hear that drink order a lot from people over 25.
Yeah, he probably is about 25. So that’s true. When the props people come up to me and say, “What do you want to drink?” I always say a whiskey or, you know, vodka soda, or gin and tonic. But rum and Coke… yeah, that’s like a college drink. So I kind of wish I’d been drinking rum and Cokes since we started the show.

TVLINE | It does seem very Greg.
It does. 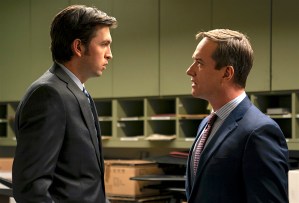 TVLINE | So Greg’s relationship with Tom is a complicated one. Tom insults and bullies Greg at every turn, but Greg still seeks him out for advice. We know that Tom would castrate and marry Greg in a heartbeat, but how does Greg feel about Tom?
Greg feels less affection towards Tom than the inverse. I think Greg needs someone he can go to with stuff. And for some reason, Tom does feel like a steel trap in that way. Like, I don’t think Tom has ever betrayed Greg. And I think Greg might betray Tom. For some reason, I just think that that’s more possible.

TVLINE | Tom’s always offering to wrestle him and things like that, but then he plays it off as a joke.
He’s just so erratic. Yes, he’s so unpredictable. And that’s hard to love. That’s a terrible trait, when someone might wrestle you, or they might footstool you, like he did to that guy in Season 2. You don’t know what he’s going to do day-to-day. Throw water bottles at you… he’s prone to an explosiveness that is scary for anyone. 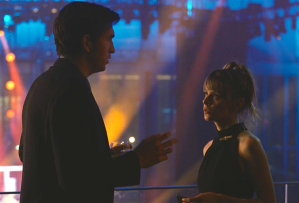 TVLINE | Greg’s romance with the PR girl Comfry is one of the few lighthearted storylines we’ve gotten this season. Tom and Kendall both warned him not to ask her out, but he did it anyway.
It felt like it was only a matter of time before Greg got a love interest, because he doesn’t have anything good in this world, and he’s a good guy. I feel like everybody has an outlet for their stress. Tom uses me as a punching bag from the emotional beatings he gets from Shiv. Shiv, from her dad and her siblings. And so Greg doesn’t have anyone to pass on to, or like, at least vent to, and I think it’s nice. It makes sense for him to have something that might feel good. Someone who can, like, hug him and get a genuine hug from a person.

TVLINE | We don’t get a lot of genuine hugs on the show.
You don’t. There’s one between Kendall and Shiv in Season 2, I think, but there are not a lot of good hugs. They all need hugs.

TVLINE | Can you tease anything about the final two episodes? The Roys are going to Tuscany for Caroline’s wedding.
Yeah, they go to Tuscany. The last two episodes, they’re quite chaotic. There are a lot of dynamics changing. The company is in peril. Alexander Skarsgard’s character is quite essential, and he’s a big threat for the family. And Greg’s difficulty in this relationship, or trying to navigate this new romance, is a part of it. And Tom and Greg, what can I say about those two guys? Uhhh… I can’t say anything. Tom and Greg enjoy going to a wedding together. They wish they were getting married.