Three decades after driving off that fateful cliff and into one of cinema’s most iconic freeze frames, Geena Davis and Susan Sarandon are getting back behind the wheel together. To mark the 30th anniversary of Thelma & Louise, the actresses will reunite for a drive-in, appropriately enough.

Originally released in 1991, the film stars Davis as Thelma and Sarandon as Louise, lifelong best friends looking for an escape from their bleak Arkansas lives and unfulfilling relationships. But a weekend getaway ends with the two fleeing for Mexico in a turquoise Thunderbird after killing a man, the authorities in pursuit on a full-throttle crime spree. Directed by Ridley Scott, the man behind Alien and Blade Runner, Thelma & Louise was a hit, setting the industry ablaze and becoming a timeless feminist rallying cry.

The Thelma & Louise 30th anniversary screening will likewise make an impact, benefiting organizations chosen by each star: The L.A. Regional Food Bank for Sarandon and The Geena Davis Institute on Gender in Media, which in a full-circle moment, Davis created because of having been in Thelma & Louise.

“The reaction to it heightened my awareness of how women are portrayed in Hollywood tremendously,” Davis explains to ET. “And so, when my daughter started watching little kids shows, I immediately noticed that there were profoundly more male characters than female characters in what kids see. So, I’ve been working to get more female characters in TV and movies made for kids. That’s what we research and work on.”

The drive-in will be held at Cinespia’s Drive In at the Greek Theatre on June 18, with Davis and Sarandon appearing in person for a pre-screening Q&A. (Tickets available now.) “We’ve seen it outdoors once before, a number of years ago at Cannes,” Sarandon recalls, “and I’ve gotta say, it plays really well outside.”

Thelma & Louise would go on to earn six Oscar nominations, including both Davis and Sarandon for Best Actress, and launch the career of a then-unknown actor named Brad Pitt. Zooming with ET’s Nischelle Turner, the duo looked back on making their seminal road movie, being ahead of their time and Pitt’s — literally — scene-stealing abs. 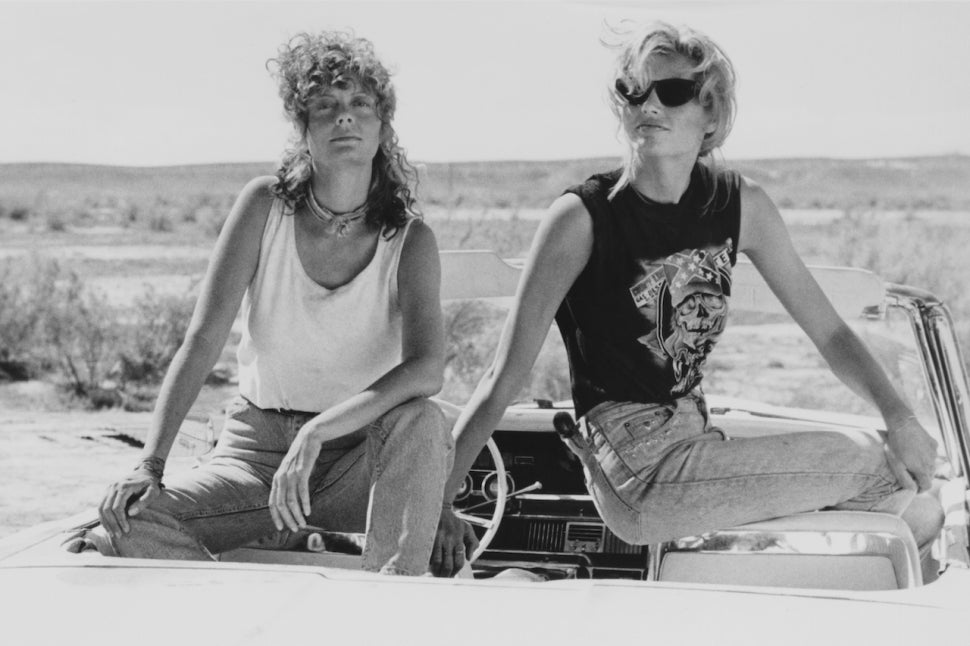 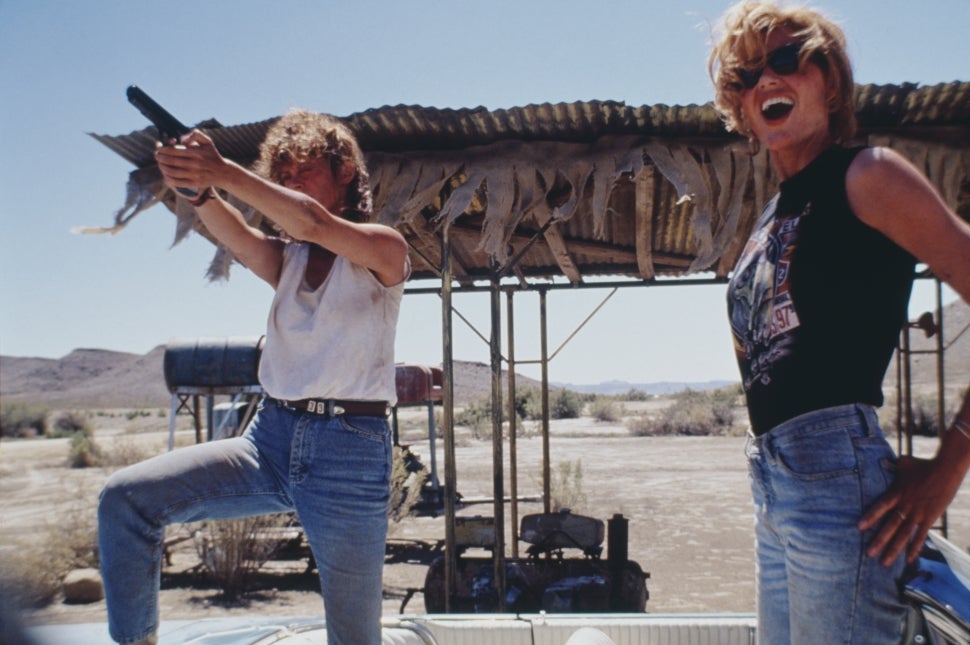 I love seeing you two back together. It’s been 30 years since Thelma & Louise. Can you even wrap your brain around that?

Susan Sarandon: Well, I had Jack Henry [Robbins] with me, and he was just, like, a year and a half or something. Now, he’s 6’5″ and 31. [Laughs] So, if Thelma and Louise had a child, that is how big he’d be. It’s a way of kind of remembering all of those years.

Geena Davis: It’s so weird. It doesn’t feel like it was yesterday, but it certainly does not feel 30 years ago. I think I’m still stuck in my 30s. I think I’m 35.

Sarandon: But when you’re talking to people and doing interviews and you realize they were, like, at the most six when the film came out, then that’s weird. [You’re like,] “So, were you frightened by these two women that empowered themselves?”

Before this movie, seeing two women onscreen together like that, really empowering each other, was rare. Did you know how ahead of time you were or the precedent that you were setting with this?

Sarandon: I thought we were doing, like, a cowboy movie with women in trucks instead of, you know, and it was going to be fun because we were outlaws and everything. But it’s true that most films I’ve been in, if there was more than one woman, they were automatically your enemy. If there was an older woman and a younger woman, they hated each other because one was older and one was younger. Very rarely were the two women friends. There weren’t very many films [like that].

Davis: I agree. We didn’t think we were making something that was going to strike a nerve or anything. We just hoped people would see it. It seemed like a small movie. But I certainly noticed when I first read it that it was unusual that it had two extraordinary female characters in it. That was different.

You coined the term “ride or die” and didn’t even know you were doing it at the time. When you think back to making this movie, what is your fondest memory? And I’m not going to let you say working with each other, because I know you’re going to say that!

Davis: [Laughs] I was going to say, rolling around in the dirt before we started shooting every day. Because of course, they wash your clothes every night, and we decided the fake dirt wasn’t enough, so we’d, like, roll around in the parking lot on the ground.

Sarandon: It really was a magnificent place to shoot, in Utah. One of the reasons I think [the movie] became iconic is because Ridley put it where John Wayne made his big cowboy movies. One of the great things about doing film is when you get to shoot through the night in Tiffany’s or be in places that you normally wouldn’t be able to do the things you’re doing. We were in this beautiful, beautiful area of the park and we were shooting mostly with natural light, so it was early in the morning till the sun went down, shooting us [driving] back and forth. The joke was that we thought that [the movie] was just going to be voiceover with theses shots, because it was so magnificent all the time and so little time was spent on the scenes, but then there would be all this footage of us traveling to and from the set in that car. So, I think I really valued — in addition to working with Geena and having just a fun, fun time — just being able to be there. That was so cool. 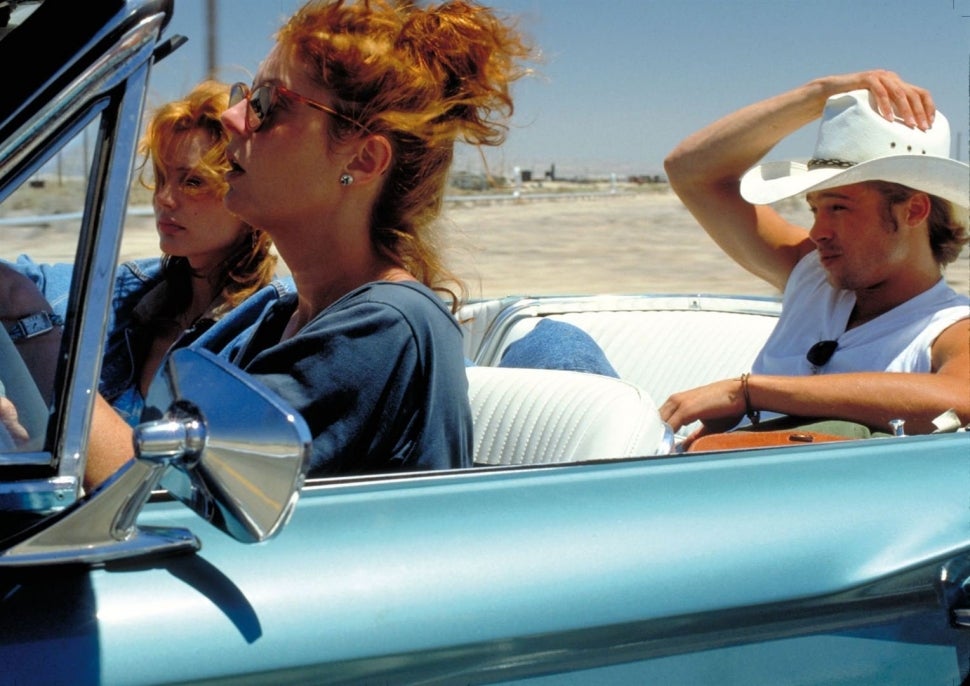 You had Brad Pitt in there, too, and he’s the eye candy in this movie.

Sarandon: I remember Geena, you coming back after the scene the next day and saying, “Honey, they’re maybe not looking at our lighting, but Ridley was in there spritzing him down and the lighting was on him.” They made sure he was getting every single ounce of hotness or whatever of Brad Pitt that could be.

Did you have any idea at the time, “This guy’s really talented. He may really become a bona fide movie star in this industry”?

Sarandon: When I saw the film for the first time, he did so much more with that part than what was on the page that I thought, “This guy is special.” And he’s a character actor — just because he looks drop dead gorgeous — and what he added was really clever. So, that was the first time I thought, “Well, this guy is really special.” Because he brought a lot of stuff to it that wasn’t in the script.

Davis: Oh, he definitely did.

Have you all stayed in touch as a group over the years?

Davis: We certainly have, yeah.

Sarandon: Geena’s my group. That’s the only one. If I run into Brad, he’s always really sweet. But, no. Call me, Brad!

All these years later, what do you think of the movie’s ending? And is there something you remember from shooting it that maybe we don’t know yet?

Sarandon: It happened at the very end of the day. It was the last day, and it was the helicopter coming in, the police cars arriving, Harvey [Keitel] running and everything else, and then we got to the scene. So, it was basically like a stunt. We had one take as the sun was going down. There had been a lot of other dialogue in the scene, and we just took that out and put that over a chase scene, because by this time, it seemed like we should be finishing each other’s sentences rather than going on a long discourse. And I just said to Ridley and Geena, I said, “I’d really like to kiss you,” so that’s what we did. One take. One juicy romantic take and then off we go into Butch Cassidy and the Sundance Kid area.

Davis: It was really magical the way it happened, because for me, when I turned to look at Susan, the characters are saying goodbye to each other but [it was] the end of this incredible experience. It was not acting. It was just reality for me.

Sarandon: We really earned it by that time. 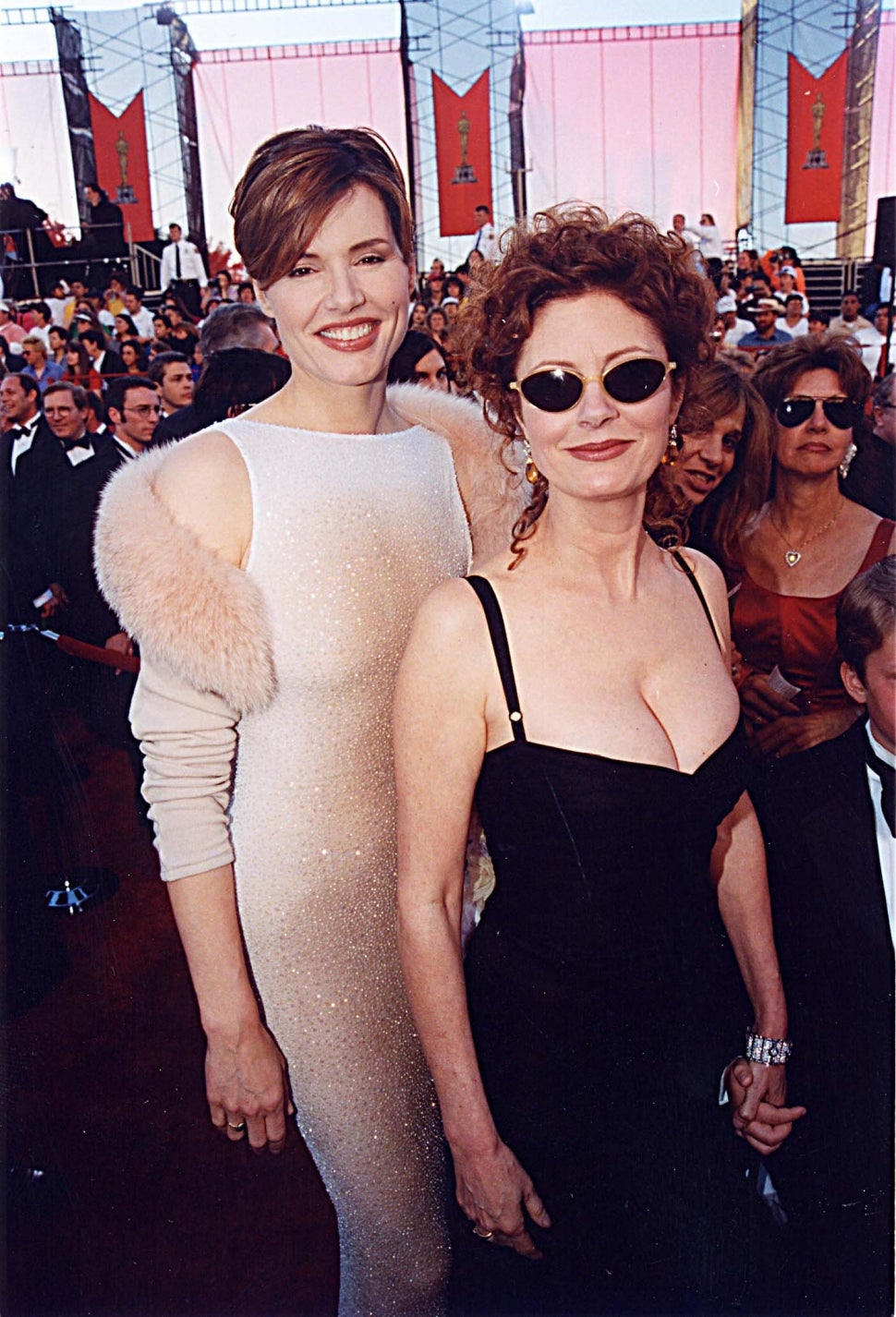 Susan, you said your son was one when this movie was made. I would suspect all of your kids have watched this movie by now. What was their reaction when they saw it, knowing their moms made this iconic film?

Sarandon: I don’t even know if they’ve watched it, actually. They didn’t watch it with me, so I have no idea.

Sarandon: I mean, I think they’re probably relieved that I didn’t take my clothes off, because that’s always the first thing. “Is there sex in it? Is there going to be sex in it?” Which, even just kissing is just as offensive as full-blown frontal nudity [to them], so it doesn’t even matter if you’re tasteful. So, I don’t even know if they saw it. I’ll have to drag them [to the drive-in]. I’ll force them for the anniversary. They’ll probably say, “Oh, mom, of course I saw it,” but they didn’t say anything to me.

Davis: I don’t know if my kids have seen it either, quite honestly.

Sarandon: Nobody wants to see their mother looking like someone else. When I was doing films when I just had my daughter and I would come back, the first thing she had to do was take my makeup off. She just did not want me to be with my hair, with my makeup [done]. She wants her mom back. She doesn’t want someone that looks different.

Davis: When my kids were very little, I put on Stuart Little for them — which I’m in — and after about five minutes, they said, “Mommy, can we watch something else?” It was like, “You didn’t notice mom on the TV?”

Sarandon: Well, my kids were all in Stepmom, so they would fast forward to the scenes they were in. But then the interest waned, and that was it.

Would you two ever team up again onscreen together? And why has that not happened yet?

Sarandon: I would love that! I don’t know, we haven’t gotten–

Davis: Send us something! We really would love to do it again.