Home » TV and Movies » Tayshia Adams, Mike Johnson, Ashley I, and JoJo Fletcher are on set for Matt James' The Bachelor filming

Tayshia Adams, Mike Johnson, Ashley I, and JoJo Fletcher are on set for Matt James' The Bachelor filming

Tayshia Adams has yet been confirmed as the next Bachelorette, but it’s clear that she will play a major role in this current season of the show.

We don’t know much about what happened in La Quinta, California after Clare Crawley stopped filming or if Tayshia found love.

But it is interesting that Tayshia is in Nemacolin right now at the resort where Matt James is busy filming his season of the show.

He was announced this summer as the next Bachelor lead and after producers wrapped a season of The Bachelorette without any traces of COVID-19, they pursued The Bachelor in Pennsylvania.

So far, things appear to be going well and Tayshia isn’t the only one there.

Tayshia Adams and others are at the Nemacolin Resort

The news of Tayshia being at the resort surfaced yesterday as @bachelorteadaily started sharing photos of several Bachelor stars being on location in what appeared to be the same hotel area.

Below, you’ll see Tayshia in a hotel room. 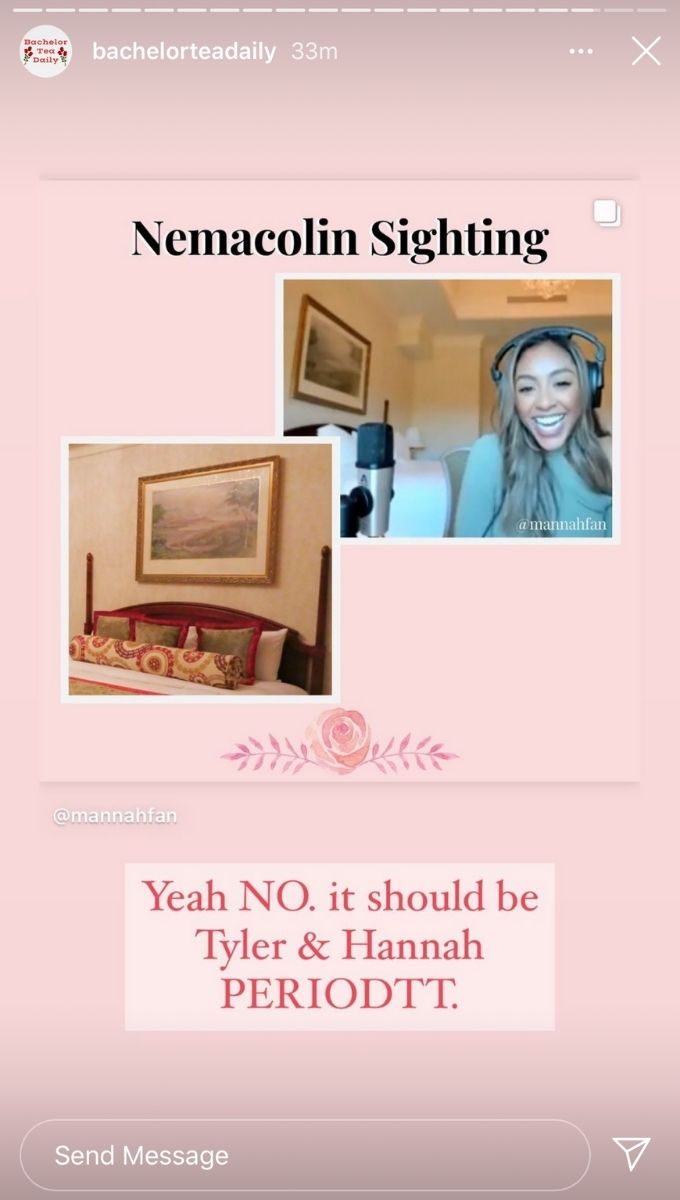 JoJo Fletcher, who stepped in to host a few episodes of The Bachelorette in Chris Harrison’s absence was also spotted in a similar hotel room.

Fans were not happy about it, saying that Hannah Brown and Tyler Cameron should have been at the resort because they are close friends with Matt and may be able to offer him better advice because they know him. 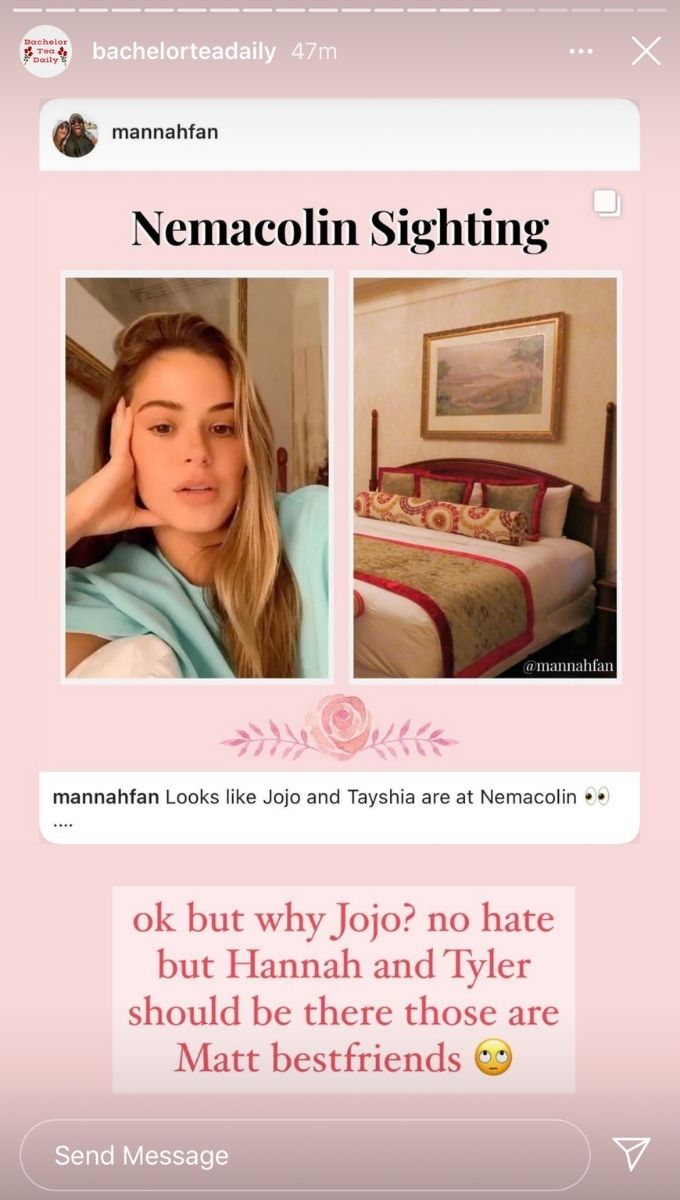 Then, Ashley Iaconetti also shared a photo from what appeared to be at the same location as Tayshia and JoJo. 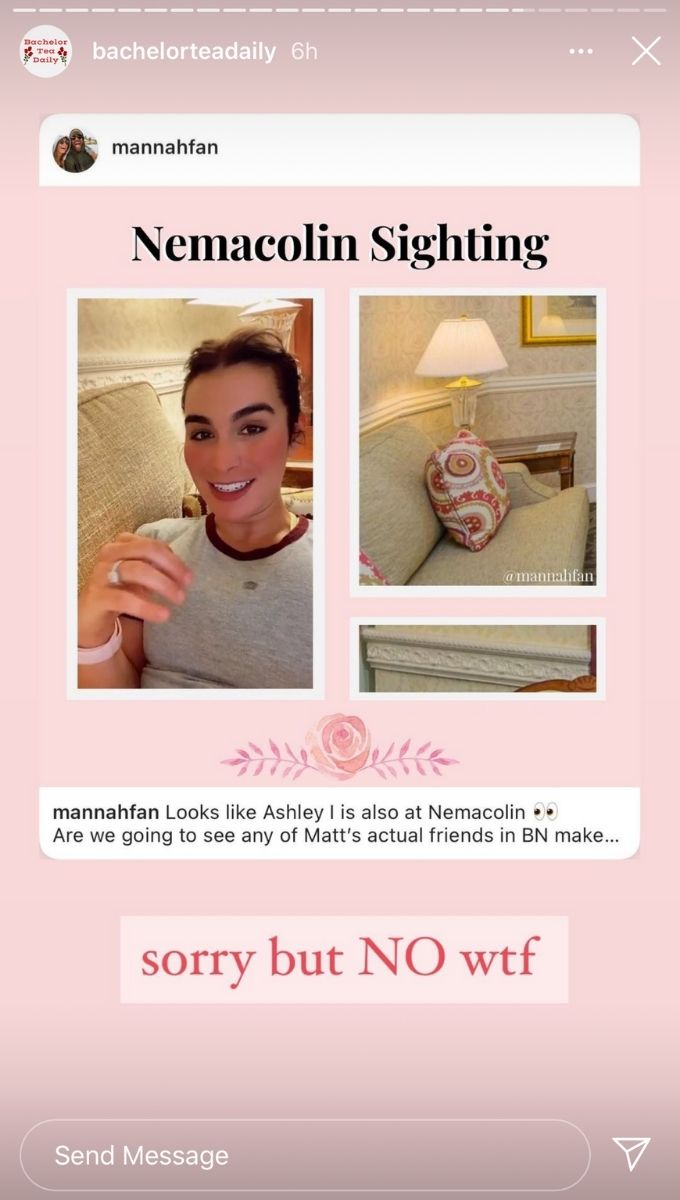 Mike Johnson was also spotted in Pennsylvania, but he didn’t share the same kinds of photos or live videos from the hotel room at the Nemacolin Resort where Matt is filming. 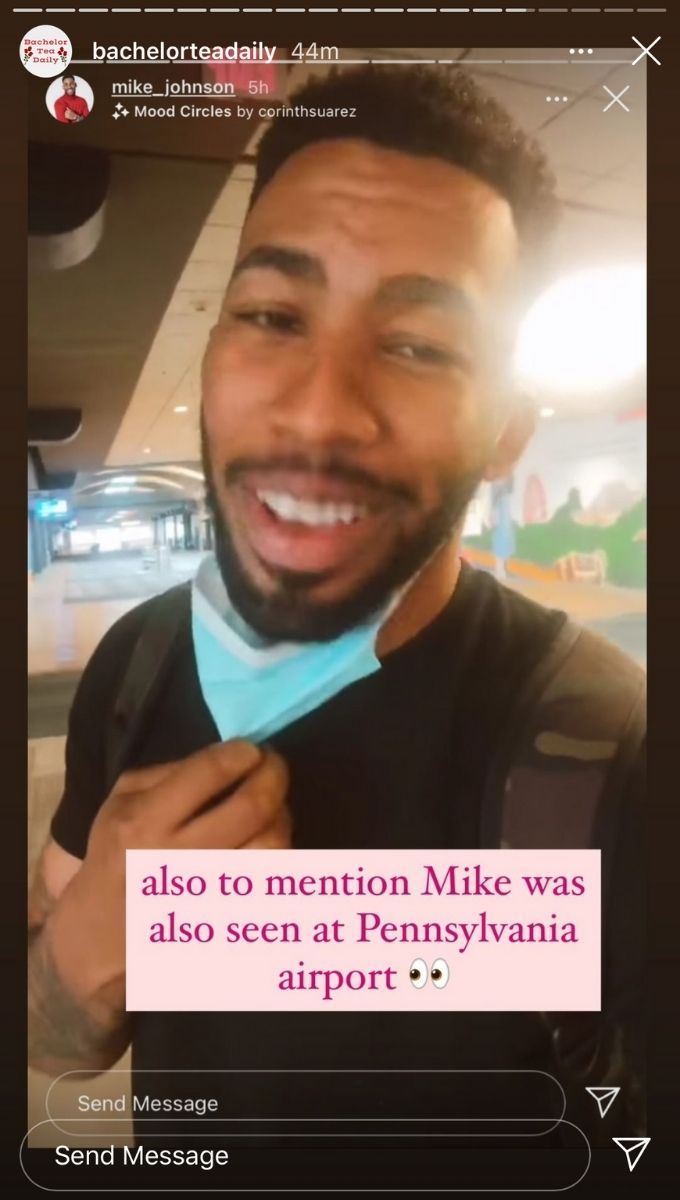 We can’t confirm that Mike is headed to the resort, but given the other ladies are currently there, it wouldn’t come as a surprise.

Tayshia Adams could be there to give Matt James some advice

Tayshia could be there to give Matt some advice, as she has just wrapped her own season of the Bachelorette.

We know that Tayshia was on The Bachelorette and there are theories that she’s with Brendan M from her season. He was the last person to speak out about the Bachelorette premiere on social media this past Tuesday.

Could Tayshia be on The Bachelor because she has advice for Matt?

She may have some solid advice, as she was previously married. She fought to make her marriage work even though her ex-husband wanted to leave and wanted out of the marriage. She pursued Colton Underwood on The Bachelor and found love with John Paul Jones on Bachelor In Paradise.

Now, she could be engaged. Only time will tell.