‘The 100’ Series Finale “The Last War” Recap: Who Lives, Who Dies & Who Transcends

SPOILER ALERT: This recap contains details about tonight’s series finale for CW’s The 100, “The Last War”

In summing up the series finale of CW’s The 100 tonight, it’s like the lyrics to the Arthur Lee song “Everybody’s gotta live, and everybody’s gonna die.”

Or as Levitt tells Octavia later in the episode, “transcendence or extinction” is in store for the humans. 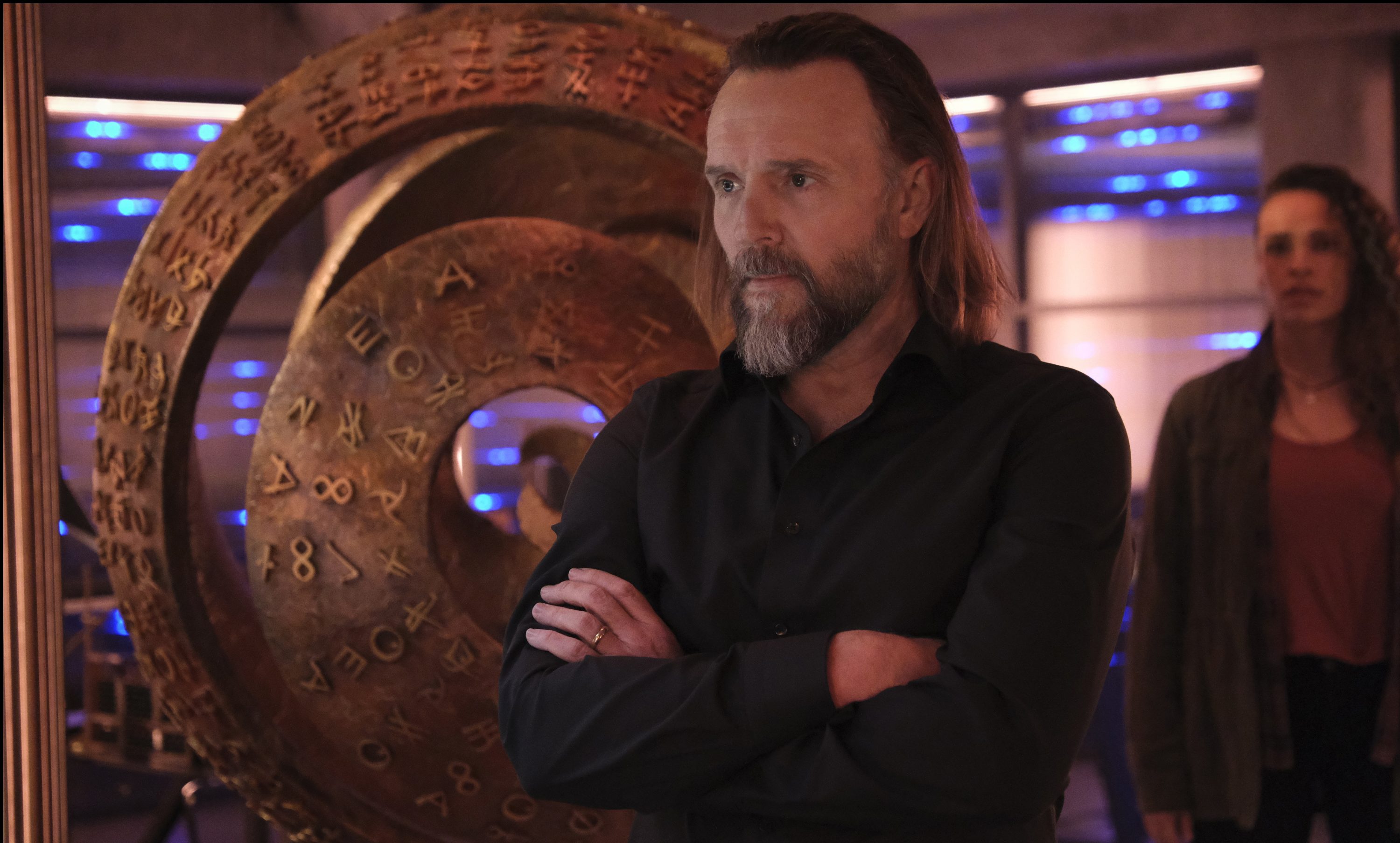 We headed into the finale wondering how Bill Cadogan would realize his idea of transcendence for all humanity; he having really bad intentions of starting a war which would wipe everyone out. Then, we were also worried about Maddie. Dear, Maddie! Was Clarke’s daughter, like, completely dead?  Levitt said she wouldn’t recover, but still was there a way for her to recoup? Well, from the onset tonight, Clarke cleared up any concerns we might have about bad guy Cadogan prevailing by shooting him during his transcendence truth test on a dock where he use to take his daughter Callie. The dock is located somewhere in the cosmos accessed by those entering a certain code into the Anomaly Stone when they’re ready to transcend.

Callie, and Cadogan, are expected to be a big part of The 100 ‘s prequel, the former being introduced in the season 7 episode 8 “Anaconda”, which is the scene-setter for that series. Before Cadogan is shot, he is informed by a judge (in the form of Callie) that, it’s not a war, but a “trial, a test” this whole thing of transcendence. The Callie judge tells Cadogan “This is who you chose. We most often take the form of the subject’s greatest teacher or the source of their greatest failure…or can be their greatest love. Seeing you’re faced with all of the above.”

Callie tells him to “answer truthfully. If you don’t, I will know it. If your answers are satisfactory, your consciousness and that of your entire species will become one with ours. You will transcend your human form and become infinite. If you fail to earn this evolutionary leap, you will be eliminated, turned to crystal…”

As far as how all this transcendence thing works, Levitt tells Octavia that dead people can’t pass, which means don’t expect to see Bellamy, who Clarke shot a couple of episodes ago, in the afterlife. 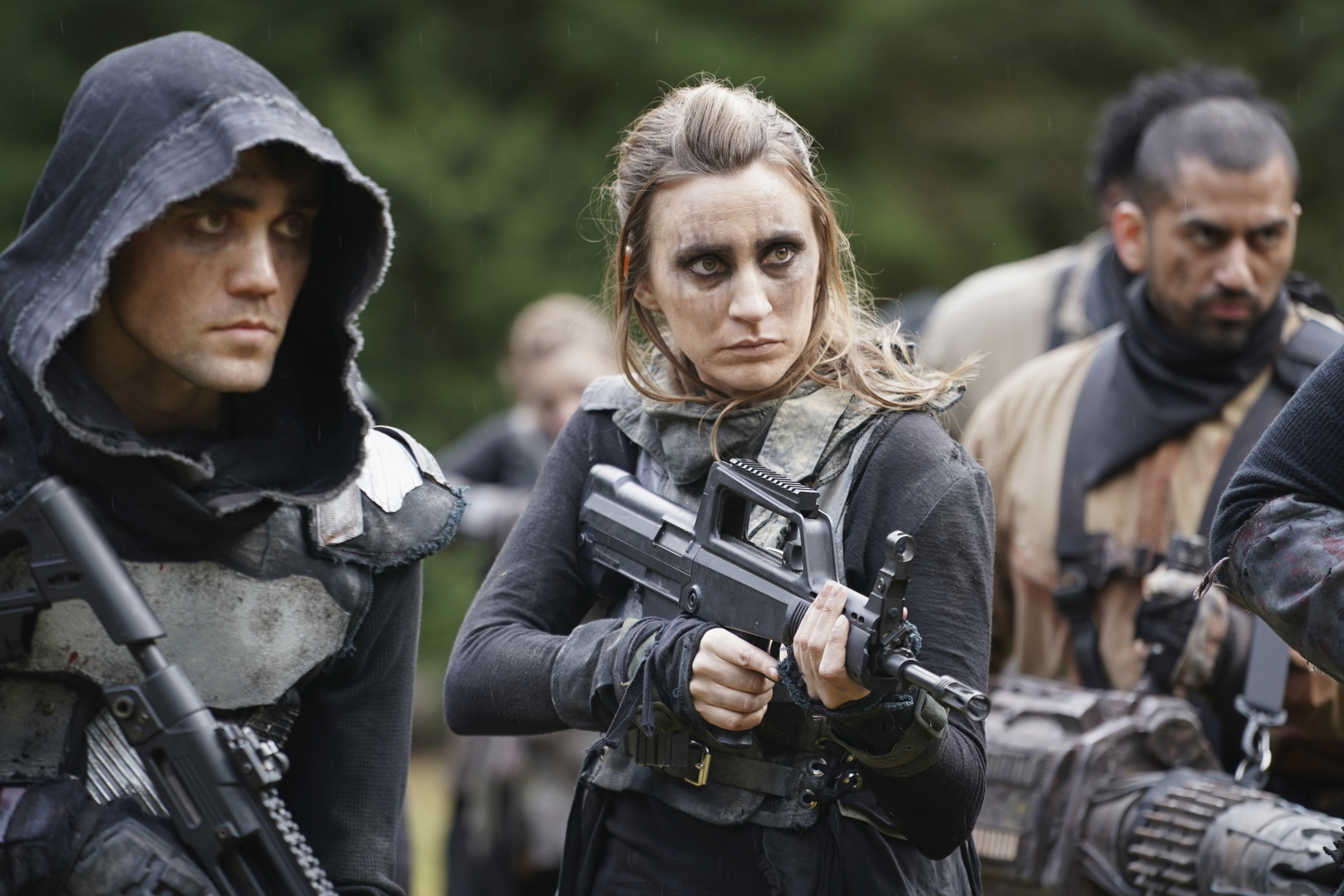 Eventually, Indra, Jordan, Miller, Gaia, etc. make their way to Arboretum on the planet Bardo to face off against the Disciples. Essentially, this is “The Last War”. Jordan arrives, putting the Disciples’ army offline. “We all will die, when is out of our control,” says Indra.

Earlier Murphy, Jackson, (and Raven) earlier arrive with Emori in a hospital area on Sanctum. Emori is dying after being gutted with a steel pole after last episode’s bomb fallout. They’re able to a revive Emori a bit, but her pulse is weak. Emori eventually flat-lines. Murphy tells Jackson to take out her mind drive. Murphy wants the memories of his GF in his head. Later on, Emori wakes up in luxurious bedroom, the balcony of which opens to a gorgeous landscape of rolling desert sands. She’s in Murphy’s head. He tells her that she died, and that they’re in the place where they first met. They slow dance.

Back at the dock, Callie now gone, Clarke is waiting — and Lexa, her late lover, appears. “I’m not her, Clarke,” Lexa says. “I know,” answers Clarke. Lexa says that the test for transcendence has been set in motion, and Clarke has to go through with it. Lexa questions why Clarke killed Cadogan. Clarke says “He killed my daughter,” that it was not revenge, but justice.

“Pain begets pain, that’s not justice, Clarke” Lexa tells her, “You say you do these things to protect your people, but you’re all one people.” 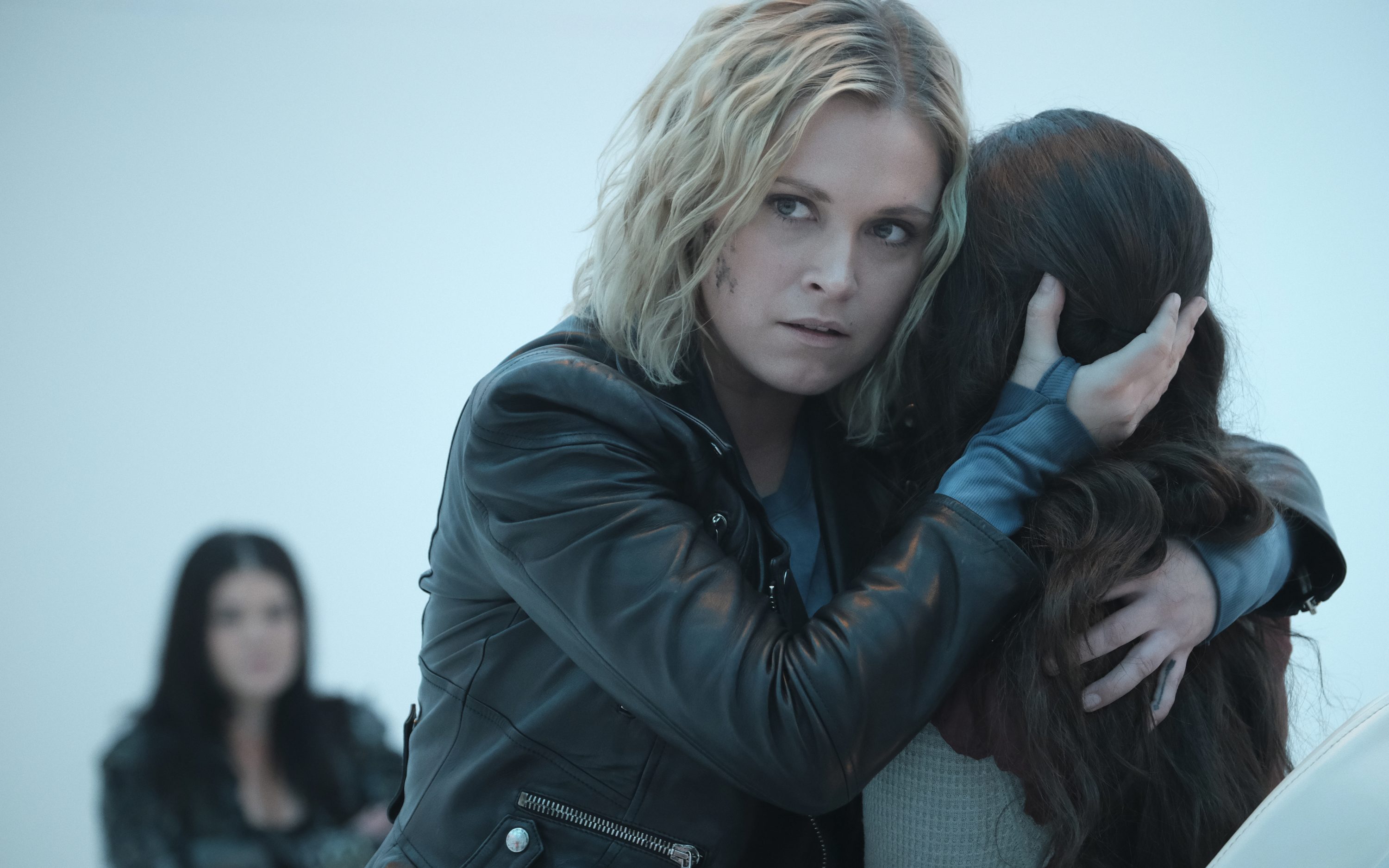 Clarke blasts Lexa, “He (Cadogan) created a world without love to get to you. He killed my child to get to you. Have you ever considered that you’re the problem? How dare you judge me because you annihilate an entire species, because they don’t live up to your ideals? Have I pulled the lever to commit genocide? Yes I have. And did love make me do this? You’re damn right it did! But what’s your excuse? You play games with people and call yourselves higher beings. You are no better than the murderers I’ve killed and no better than me.”

Clarke comes back from the dock via the flaming portal to Bardo and tells Raven that she failed the test. “We don’t transcend? We’re wiped out? It’s over?” Raven asks Clarke who sadly nods. Raven decides to enter the flaming portal and she finds herself on the Ark space station. There she meets Abigail Griffin, Clarke’s mom. Abigail says that Clarke duped her team. “You’re on the brink of realizing self-extermination,” says Abigail transporting Raven to the field where the Disciples and our heroes are squaring off. Complicating the fight, and standing off to the side is crazy, old Sheiheda. Raven yells for everyone to stop, but no one can hear her.

Levitt runs on the field to stop the battle: “This isn’t the last war! We don’t achieve transcendence through violence! Cadogan was wrong! We’re being tested right now…put down your weapons!” Sheiheda opens fire. Levitt is shot. Octavia and Echo pull Levitt’s body off the field. Echo is later on a casualty.

Elsewhere in Cadogan’s fortress, Clarke runs to find Maddie who was left near lifeless in the brain scan room. “I’m so sorry I failed you, I failed everyone,” Clarke says taking Maddie’s face in her hands.

Back on the battlefield, Octavia tells Indra to hold her fire. But Indra fires a big cannon at Sheiheda. 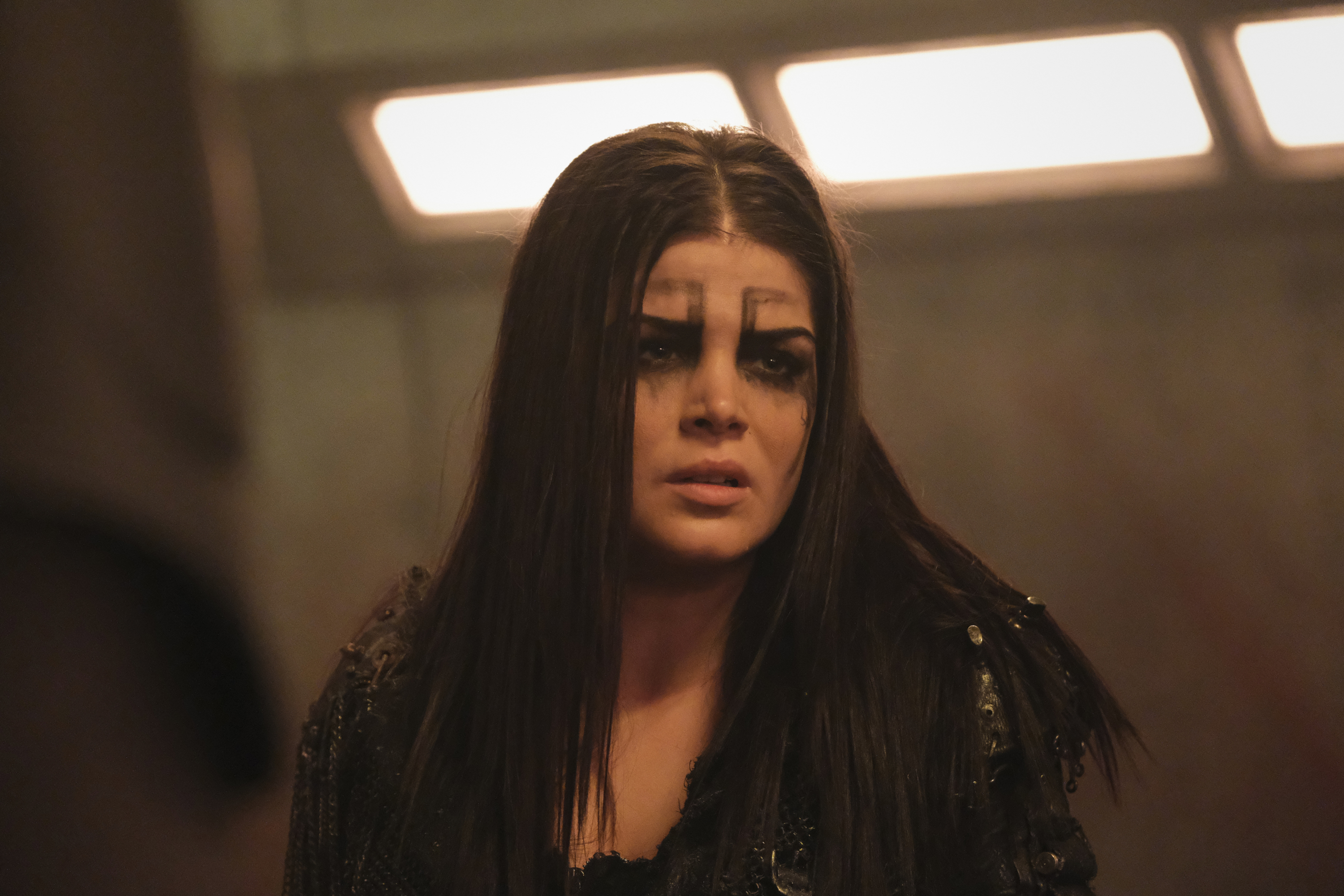 Back on the battlefield, Octavia begins to scream out her Braveheart speech: “Enough!  What the hell are we doing here? You swore an oath to fight for all mankind. Well, look around you. We are mankind! We are one group! If I kill you, I kill myself! If we keep killing each other, there won’t be anyone else left to save! Our fight is over Indra!”

Octavia gets her side to drop their weapons. She tells the other side that transcendence is within reach, something her bro always told her. “If we fight this war, we don’t deserve to find out if he’s right…we fail, we die. I’ve been to war, the only way to win, is to not to fight.”

The Disciples begin to surrender and everyone begins to turning into little orange floating souls, including Emori (technically her mind is still alive, so she transcends), Murphy, Maddie, everyone on the battlefield. Clarke is the only person who does not transcend. She walks the battlefield where many of the people have turned into soul trees. She is alone. She transports herself back to Sanctum, where she finds the dog Picasso as the only living being there.

Ultimately, Clarke makes her way to Earth. She’s upset, she doesn’t want to me alone. 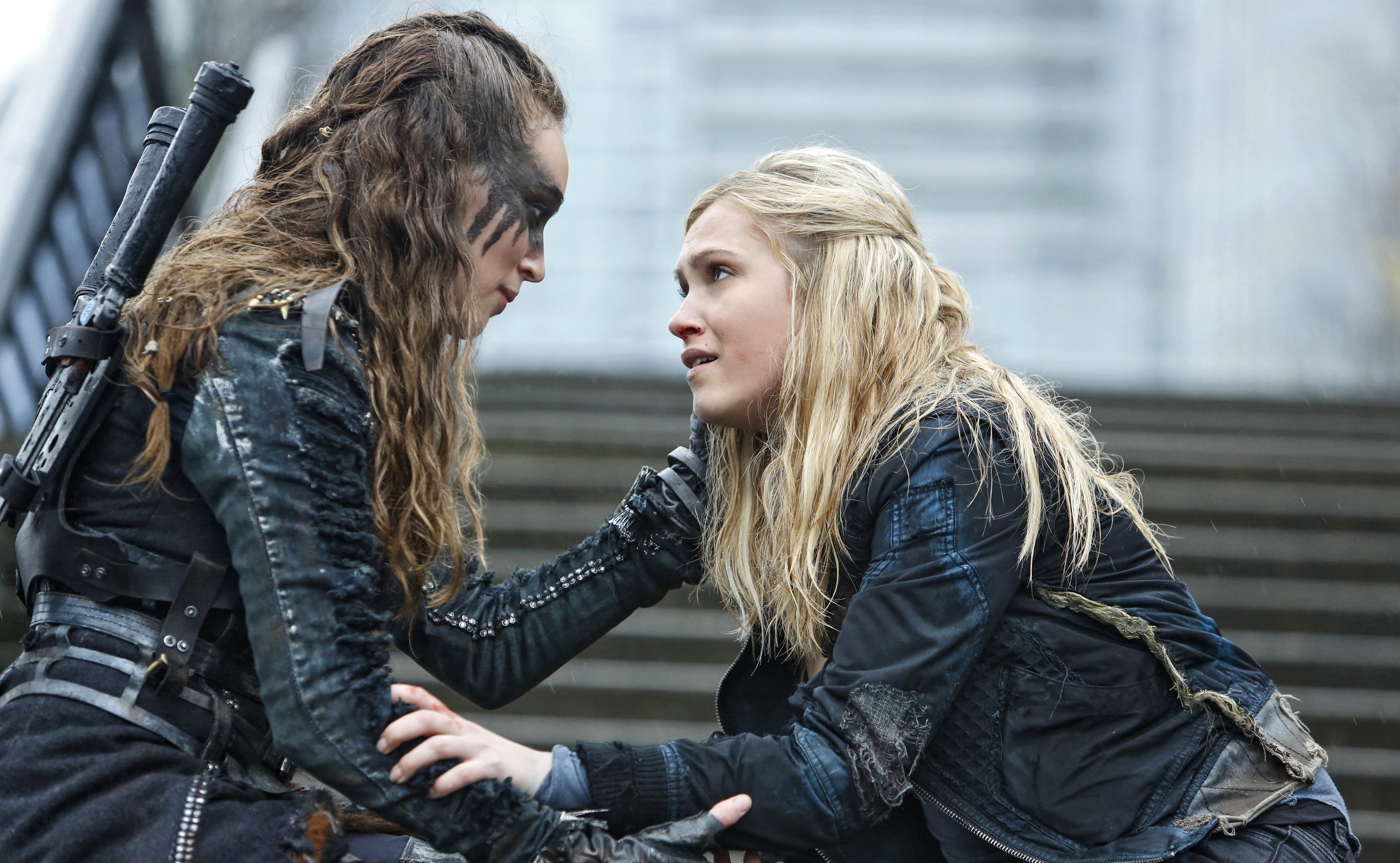 Lexa says that Clarke can’t transcend because she committed murder during the test. Lexa says that Maddie transcended and is at peace with the total transcended consciousness. No one in the history of the cast has ever shot someone in front of the judge before.

“Transcendence is a choice? You can choose to come back” Clarke asks Lexa.

“Of course. Until now, no one ever has,” Lexa answers. And at that point Clarke sees her all her friends: Indra, Jackson, Gaia, Murphy, Raven, etc. Everyone but Maddie is choosing to stick in the transcended world.

“There won’t be offspring, and they won’t join us when they die. None of them seem to care,” says Lexa, adding that humans are “a curious species indeed.”