Home » TV and Movies » The Big Night In viewers distracted by Davina McCall: ‘Can’t take my eyes off!’

The Big Night In viewers distracted by Davina McCall: ‘Can’t take my eyes off!’

The coronavirus crisis has caused many TV programmes to halt production but tonight offered BBC viewers a welcome change as Lenny Henry, Davina McCall and Matt Baker fronted new fundraiser; The Big Night In. Davina quickly got those at home talking due to her very striking outfit this evening.

The show features some of the country’s biggest names in TV, music and comedy joining up for a charity programme to help raise money for COVID-19.

The special programme is also encouraging viewers to give thanks to key workers who are helping those in their time of need such as those working for the NHS.

Davina McCall, Lenny Henry and Matt Baker were live from BBC studios to present tonight but Davina quickly left those watching at home distracted by her vibrant choice of outfit.

The star was wearing a mid-length one-shoulder yellow dress which caught the eye of viewers early on. 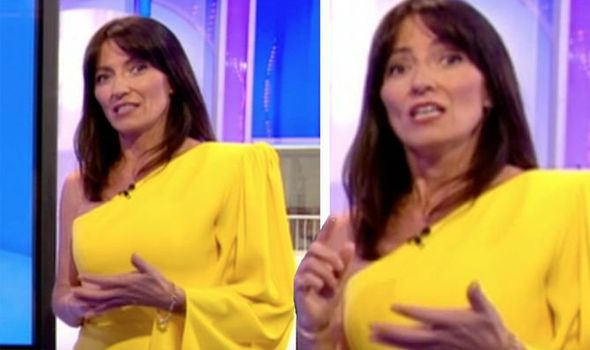 Taking to Twitter, one viewer asked: “Have you seen the size of Davina’s sleeve #BigNightIn.”

“Is Davina wearing a bedsheet? #TheBigNightIn,” questioned another.

A third wrote: “Davina’s forgotten half her dress but nice colour #TheBigNightIn.”

“Whoever made Davina’s dress, they’ve accidentally put the material from both arms on the left arm only #TheBigNightIn,” said a fourth. 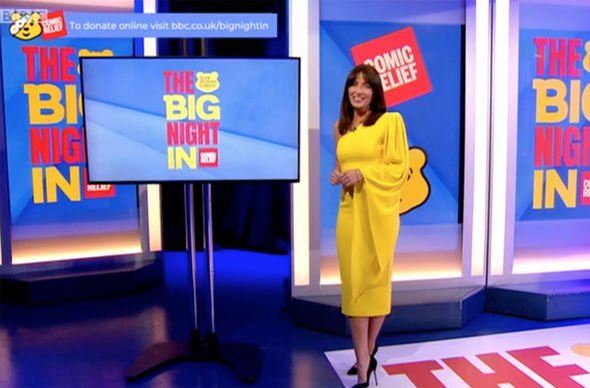 Many were big fans of her outfit choice, with one saying on Twitter: ”Wow @ThisisDavina’s yellow dress is stunning #TheBigNightIn.”

Another said: “Can’t take my eyes off Davina’s sleeve!!! #TheBigNightIn.”

A third wrote: “Davina is looking FABULOUS this evening #BigNightIn.”

Another viewer commented: “Ooo Davina is in a Pudsey colour dress! #BigNightIn.”

“#BigNightIn Davina back to the 80s with the big shoulders,” shared a fifth.

Davina told viewers at the beginning of tonight’s show: “Comic Relief and Children in Need have always worked with you to reach the most vulnerable people.

“Those people need help more than ever in this crisis. All the money raised tonight is going to support projects right here in the UK.”

She added: “We’re going to be showing you some of their amazing work,” before providing details on how to donate.

The presenting trio reassured viewers they were social distancing this evening and keeping to two metres apart.

Matt joked at the start: “Do you know, we nearly called this thing Comics in Need but that’s a completely different show!”

“Lenny, what have you done with Pudsey, where is he?” with the host replying: “He’s been furloughed!”

The three-hour-long live show was filled to the brim with special comedy sketches.

The classic Vicar of Dibley was revived and saw Dawn French don her white-collar once more for a special clip.

Miranda Hart was also back with a little sketch and funnily enough, BBC One viewers were loving it.