Home » TV and Movies » The Haunting of Bly Manor Premiere: Grade the Next Installment in Netflix's Hill House Horror Anthology

The Haunting of Bly Manor Premiere: Grade the Next Installment in Netflix's Hill House Horror Anthology

Warning: This post contains spoilers for the premiere episode of The Haunting of Bly Manor.

The Haunting of Bly Manor, the second installment in the anthology that started with The Haunting of Hill House, began streaming today on Netflix. The new season of Mike Flanagan’s horror series is set in the 1980s, loosely based on Henry James’ supernatural writings including The Turn of the Screw, and follows American 20-something Dani Clayton (played by Hill House‘s Victoria Pedretti) as she begins her employment as a nanny at an English country manor where not all is as it seems.

In a moment, we’ll want to hear your thoughts on the episode. But first, a recap:

In Northern California in 2007, a woman (Hill House‘s Carla Gugino) dreams of a woman emerging from a lake, but she wakes up before we get much sense of what’s going on. She’s in a hotel room. The door is slightly ajar, but she doesn’t seem worried. She goes into the bathroom and drains the sink and the tub, both of which are full of water, then takes a cab to a wedding rehearsal dinner at a grand home.

She’s late; when she arrives, she exchanges a meaningful glance with the man who’s giving a speech in honor of the bride and groom. Afterward, the soon-to-be Mr. and Mrs. and a few guests have a drink in front of the fire. There’s talk about how the venue, a former convent, might be haunted. Then the conversation turns to ghost stories, which causes the woman (whose name we don’t yet know but who has a British accent) to say, “I have a story. Well, it isn’t really my story. It belongs to someone I know. And it isn’t exactly short.” She promises that her tale “is full of ghosts of all sorts,” and because everyone is comfortable and has a drink in hand, they settle in to hear what she has to say. 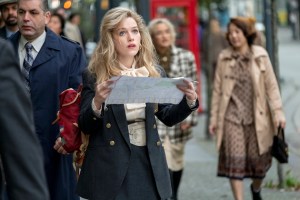 Then the action moves to 1987 London. We meet Clayton as she heads to a job interview in London. She meets with lawyer Henry Wingrave (Hill House‘s Henry Thomas), who is looking for someone to care for his orphaned niece Flora and nephew Miles. The children have had a rough go recently: In addition to losing their parents, the first au pair Henry hired recently died, as well. The interview does not go well — though Dani is a former teacher, her American tendency to speak her mind clashes with Henry’s steely reserve — and before you know it, it’s over.

She drowns her sorrows at a nearby pub and is surprised when Henry shows up a while later. They drink together, both letting down their guard a little. When she notes, “I understand death. I know what loss is,” it seems to change his mind. She heads back to her hostel and calls her mom to say she’s staying in England longer than planned. Her mother implies she’s running from something, but Dani says she’s not. As she checks out, she removes the sheets she’d hung over the room’s mirrors; a final glance back shows us a man with bright lights where his eyes should be staring back at her from the glass’ reflection. 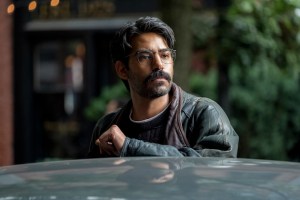 Everything is, in Flora’s words, “perfectly splendid”… until creepy moments start to creep in. Miles spies on Dani while she’s changing, and when she catches him, his manner is very odd and not at all childlike. Flora sometimes seems to be looking at and listening to something just beyond Dani’s shoulder, but when the nanny turns around, there’s no one there. For instance: Flora is momentarily incensed when she realizes that Miles has given Dani a hair comb belonging to Rebecca Jessel, the aforementioned dead au pair, but then the little girl quickly says everything is fine. 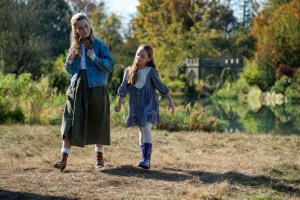 At bedtime, we see that Flora’s dollhouse is a replica of Bly Manor, with dolls representing the inhabitants (and a few extra dolls that she doesn’t explain). When Dani notices a faceless doll with black hair lying underneath Flora’s dresser, she goes to move it but is instructed by the suddenly stern little girl to put that one back where she found it. Then Flora firmly instructs her new caretaker not to leave her room at night under any circumstances, but won’t say why. Later that evening, a restless Dani does go down to the kitchen for a snack; unbeknownst to her, something watches her from the shadows.

More weird stuff happens. Flora somehow knows that Dani went for a late-night stroll, and she’s not happy about it. Dani sees a man standing on a parapet connected to a no-go zone in the house; later, no one knows what she’s talking about. Mrs. Grose fills Dani in on some of the details surrounding her predecessor: Miss Jessel fell in love with a man who skipped town with a bunch of Henry’s money, and she eventually drowned herself in the lake in front of the house. Flora found her body.

Eventually, one night at bedtime, both Miles and Flora act very squirrelly as they ask Dani to retrieve a fan from Flora’s walk-in closet. They lock the nanny inside, where she has a massive freakout that only intensifies when she sees the man with glowing eyes in the mirror at the back of the closet.

When they eventually let her out, she’s shaken and angry, and she tells the kids they’ll talk about it in the morning. In the hallway, she notices a trail of muddy footprints that travel up and down the stairs, then out the home’s front doors, which are wide open. Dani follows them outside, but no one is there. And when she turns to glance up at the house, Miles and Flora are staring down at her from their windows.

Now it’s your turn. What did you think of the episode? Grade the premiere via the poll below, then hit the comments with your thoughts!