Home » TV and Movies » 'The Masked Singer': Here Are the Best Guesses for Season 5's Group B Contestants

'The Masked Singer': Here Are the Best Guesses for Season 5's Group B Contestants 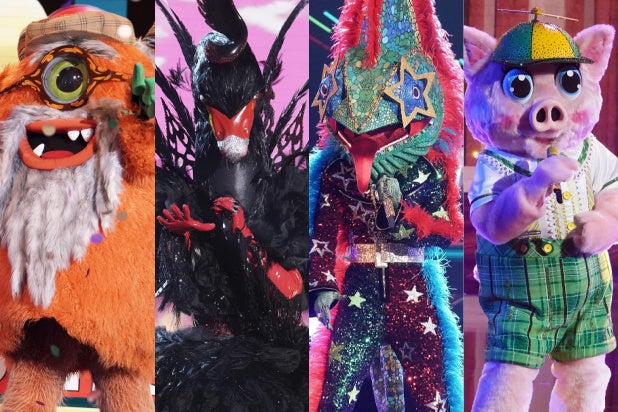 (Warning: This post contains major spoilers for the Season 5 premiere of Fox’s “The Masked Singer.”)

“The Masked Singer” Season 5 debut the second half of its costumed lineup on Wednesday, with the arrivals of Group B contestants Phoenix, Grandpa Monster, Chameleon, Black Swan and Piglet. Following last week’s unmasking of the Snail competitor from Group A during the season premiere, who turned out to be Kermit the Frog, last night’s episode ended with the unmasking of Phoenix, who was revealed to be Caitlyn Jenner.

And with big-name celebs like that kicking off “The Masked Singer” Season 5, who knows who is behind the other masks. The world of possibilities is endless, so we thought we’d help you out by pulling together the unusual suspects.

See below for TheWrap’s roundup of the best guesses from fans and “The Masked Singer” judges Jenny McCarthy, Robin Thicke, Ken Jeong and Nicole Scherzinger about the identities of the contestants in Group B.

Grandpa Monster
In a combination of guesses from the panelists and fans at home, some of the top results for this oldie (but goodie!) were  Johnny Manziel, The Miz, Scott Disick or Kevin Hart.

Chameleon
Panelists and the “Masked Singer” fandom think the Season 5 competitor whose colors come and go is either Dwight Howard, Redfoo, Nick Cannon or Wiz Khalifa.

Piglet
Pretty in pink, the Piglet costume could be housing Adam Lambert, Liam Hemsworth, Charlie Puth, Nick Lachey or a “Bachelor” contestant, if the judges and fans are on the right track with their guesses.

Fox has said “The Masked Singer” will start Season 5 with 10 scheduled contestants, who will be broken into two groups of five competitors, Groups A and B. But the broadcast network also said that throughout the season, the show will introduce “several” surprise contestants at the end of episodes in “Wildcard” rounds, giving these crashers a chance to unseat the regulars.

So next week when the remaining Group A contestants — Robopine (f.k.a. Porcupine), Raccoon, Seashell and Russian Dolls — return to the “The Masked Singer” stage, there’s a chance a “wildcard” competitor could be coming in, too.

“The Masked Singer” airs Wednesdays at 8/7c on Fox.