“Yeah, there’s a very good reason why we’re not talking about that,” HBO star tells TheWrap 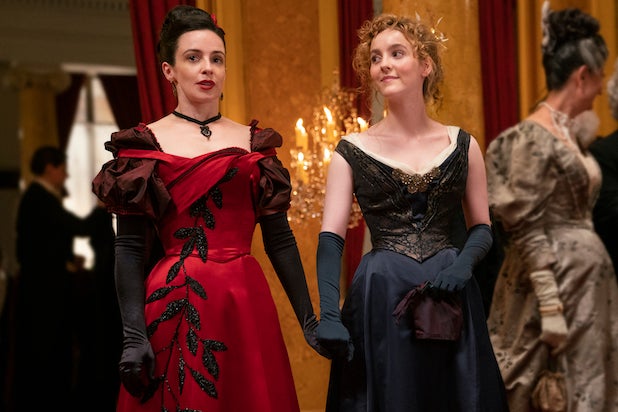 (Warning: This post contains spoilers for Sunday’s series premiere of HBO’s “The Nevers.”)

HBO’s “The Nevers” debuted Sunday with an episode that, in typical fantasy-series fashion, gave viewers many more questions than answers by its end. But not to worry, because Laura Donnelly, who stars on the Joss Whedon-created series as quick-fisted, future-seeing widow Amalia True, told TheWrap that all will be revealed in due time.

Actually, she promised the biggest explainers will come by Episode 6, which is the end of Part 1 of Season 1 of “The Nevers,” though it wasn’t initially intended to serve as any kind of finale. (The pandemic determined that stopping point in production for the show, which also marks the last of the Whedon-crafted episodes, as he exited the show last fall and has since been replaced by new showrunner Philippa Goslett.)

“I can tell you that it certainly all gets explained. But the question is, what am I allowed to tell you?” Donnelly told TheWrap. “When it comes to these spoilers, there is no point in me telling you what happens in Episode 6, right? That has to be experienced. But what I will say is that when I read Episode 6, it blew my mind. I think that whatever anybody thinks they know about this show come the end of Episode 5, that’s going to be completely turned on its head right from the start of Episode 6.”

OK, obviously readers have only seen through Episode 1 at this point, so that’s all still a ways off. But Donnelly did speak specifically to the mystery set up at the end of Sunday’s series premiere, which is how and why Amalia, her dear friend Penance Adair (Ann Skelly) and the rest of “The Touched” of Victorian England got their supernatural abilities during that strange event. And it’s why Amalia — who, just moments before that unidentified flying object sprinkled some kind of substance over London, was trying to drown herself in the River Thames — decided not to end her life once she was Touched.

“With [Episode 6] comes all the answers about exactly what was going on with Amalia in that moment while she was in the Thames,” the “Outlander” alum said. “And yes, exactly in that moment she’s ‘touched’ and she comes back up from the water and into, essentially, a new life. It’s something that will be much better to be experienced than talking about it. So even for your sake, I don’t want to tell you.”

Throughout “The Nevers” series premiere, we learn little bits and pieces about the mysterious Amalia, including that she is a widow. But that’s literally the only bit of information we get about her having a late husband, as he’s not mentioned directly at any point.

“Yeah, there’s a very good reason why we’re not talking about that,” Donnelly said. “Again, something that very much gets dealt with before the end of this first half of this season. The only thing I can say is that Penance knows everything. Penance is fully up to date with everything that Amalia has been through in her past and none of the rest of the Touched, none of the other orphans, know anything about that. So she doesn’t talk about any of it on purpose.”

Amalia and Penance’s bond as the leaders of this outlier community is apparent from the first scene of “The Nevers,” even though their “mission” is not, adding one more question to the pile for viewers trying to dissect the show. But just so you know, Amalia and Penance don’t really know what they’re supposed to be doing yet either.

“It’s really to do with a mission that Amalia is aware that she has, and that she’s essentially recruited Penance for,” Donnelly said. “She’s not entirely clear herself on what that is, but she does know that it means bringing everyone together, keeping them safe. As time goes on, that becomes more apparent. And as we watch the episodes, we learned what they’re being kept safe from and who the dangers are to them in society. This idea that they have to try to live in this society and be seen as equals, to have their voices heard — I think at the beginning and through the first half of this season, it is more of a protective role than a proactive one. That they don’t yet know why they need to go out there into the world do something, it’s more of a how do we exist in this world? How do we stay alive in this world? And that’s what Amalia and Penance are just trying to help them with.”