A tormented detective and a fictional Edgar Allan Poe team up to solve grisly killings in this stuffy period melodrama. 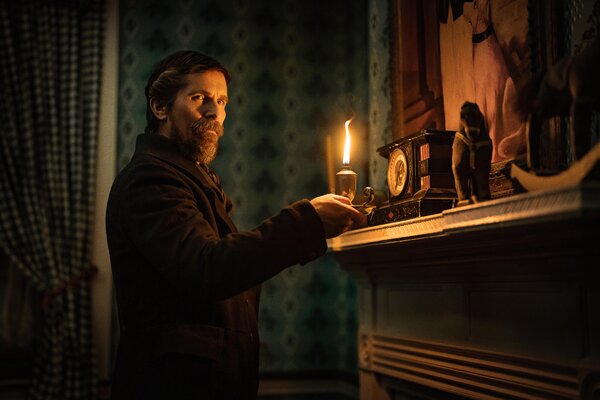 Lavishly appointed and stodgy as week-old Christmas pudding, “The Pale Blue Eye” is a pulpy murder mystery bristling with florid dialogue and supernatural flourishes. Imagining a crime-solving partnership between a grouchy police detective and a fictional Edgar Allan Poe, this historical thriller cooks up overheated gothic melodrama in a wintry New York setting.

That would be the young West Point military academy in the winter of 1830. A hanged man has been found in the woods, his heart crudely removed and his injuries suggesting a male killer. At least, that’s the conclusion drawn by Augustus Landor (Christian Bale), whose storied reputation as a scourge of gangs and general miscreants precedes his arrival at the scene. A grieving widower whose daughter is mysteriously out of the picture, Landor, and his detecting skills, might be a tad ground down; but a young cadet named Edgar Allan Poe (Harry Melling) proves a useful, if eccentric assistant. (The real Poe spent some months at West Point, but there’s no record of any sleuthing on the side.) This Poe is a rum sort, pallid and pie-eyed and with a fondness for limericks. Unsurprisingly, he is not exactly popular.

In part a Poe origin story, “The Pale Blue Eye” (adapted by the director, Scott Cooper, from Louis Bayard’s 2006 novel of the same name) is all candlelight and shadows and blazing white landscapes. Beneath the movie’s brittle surface and plodding plot, madness and hysteria roil. A woman throws seizures and daubs her face with another’s blood; an apparition haunts Landor, and a whisper of satanic ritual leads him to the lair of a reclusive phrenologist (Robert Duvall). As the Poe-etic symbols accumulate — a squawking raven, a reference to Lenore — so, too, do the big-name supporting players: Timothy Spall as a toffee-nosed Colonel, Gillian Anderson as the batty wife of the academy’s surgeon (Toby Jones).

Continuing his fascination with tormented manhood, Cooper, in this third collaboration with Bale after “Out of the Furnace” (2013) and “Hostiles” (2017), works with a solemnity that stifles the fun. Tragedy is more in Cooper’s wheelhouse, embodied in Bale’s wincing, constipated performance. So while Landor quiets his demons in the arms of a tavern wench, it’s left to Poe to amuse us. His lovesick pursuit of the surgeon’s sickly daughter (Lucy Boynton) seems the movie’s most logical diversion, considering he enjoys chats with his dead mother and she might be conversing with the devil.

Despite an impressively bleak and nifty twist, “The Pale Blue Eye” (the title comes from Poe’s short story “The Tell-Tale Heart”) is perhaps best enjoyed as a hat drama. Cadets teeter beneath helmets resembling giant coal scuttles, while their superiors barely prevent their ornate headgear from succumbing to gravity. (The ladies’ wigs, being scarcely less onerous to hold aloft, also qualify.) The real mystery here is how any of the actors made it through the movie without resorting to a neck brace.