The Small Irish Animation Studio That Keeps Getting Oscars’ Attention

When Tomm Moore and 11 friends in the small city of Kilkenny, Ireland, set out to make an animated movie in 1999 based on Celtic mythology, they could hardly imagine their labor of love would become a studio that would revolutionize the animation industry in Ireland, revitalize interest in folklore at home and connect with a global audience.

Nor could they envision that their studio, Cartoon Saloon, would go on to earn an Oscar nomination with every feature release, an impressive accomplishment for a relatively young outfit. And yet now, with their fourth feature, “Wolfwalkers,” directed by Moore and Ross Stewart, chances are the Oscars will howl at them once more.

Taking its influences from Celtic ornamental art, the studio is known for rousing stories told from the perspective of children taking their first steps into adulthood, often with a subtext about respect for nature. Visually, the films feature intricate designs, as if they were Celtic patterns (spirals, knots, triskeles) brought to life through hand-drawn motion. 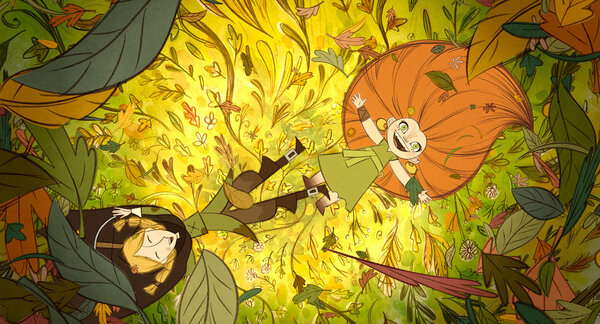 As a child, Moore first got the idea that animation could be a career path when he discovered international artists were working in Ireland. “I remember seeing stuff on TV about Don Bluth’s studio in Dublin and the Jimmy Murakami studio making the ‘Teenage Mutant Ninja Turtles,’ I was conscious of that,” the director told me by phone. Later, as a teenager, he joined Young Irish Filmmakers, a Kilkenny organization that introduced him to like-minded artists and offered access to equipment.

But while the seed for what would become Cartoon Saloon was planted there, it grew when he studied animation at Ballyfermot College in Dublin. There, he met Paul Young and Nora Twomey, the studio’s co-founders and two of its major creative forces. Originally, the group’s plan was to get hired at Sullivan Bluth Studios (“The Land Before Time”), but when that company left Ireland for the United States, the future became unclear. The only option was smaller animation companies, but none were making features at the time.

Broke but resourceful, Moore took on freelance work, and, together with Young, came up with the name Cartoon Saloon. By then, Moore and his friend Aidan Harte had an early idea for a film inspired by the ancient Book of Kells. Celtic mythology had interested Moore since childhood when he would consume books by Jim Fitzpatrick that recounted Irish legends as if they were superhero epics, and later the comic book Sláine, about a Celtic warrior.

In 1999, Moore and Harte’s concept won a grant from Young Irish Filmmakers, which also let them set up a studio in an old orphanage that served as the group’s premises. With nearly a dozen friends, they left Dublin for Kilkenny to begin production on a trailer for what would become their first feature-length project, “The Secret of Kells” (directed by Moore and
Twomey), the first in a trilogy about Irish myths. But it would take a few years — and include detours into commercials to keep the business afloat — before backers signed on.

“When we started Cartoon Saloon, the plan wasn’t to do it forever,” Moore said. “We thought at a certain point we’d get ‘real jobs’ in another studio, but it just kept on going.” He added that the friends figured they could make “The Secret of Kells” in a year or two. Instead, production didn’t start until 2005, the same time the studio started working on “Skunk Fu!,” a series created by Harte. (By then the staff had grown to around 80 artists. Today, between Cartoon Saloon and Lighthouse Studios, a joint venture with the Canadian film company Mercury Filmworks, there are more than 300 animation professionals in Kilkenny.)

With “Kells,” the bulk of the work was still being done on paper, not only because the amount of infrastructure required for 3-D animation was unfeasible, but also because traditional methods best suited their sensibilities. “We knew we could make a little bit of money look like a lot of love and care if we did it by hand,” Twomey said. Now, the artists draw by hand on digital devices to streamline production, as they did with Twomey’s 2017 solo directorial debut “The Breadwinner,” another Oscar-nominated project, this one set in Afghanistan.

But when “The Secret of Kells” was released, Cartoon Saloon was struggling. Although the film garnered festival awards worldwide, it was a flop at home. The studio was hit by the late 2000s financial crisis and, with nothing in development, was at risk of going under. That’s when the film received an unexpected Oscar nomination for best animated feature in 2010. “I thought it might just end up a footnote in history books saying there was an animated feature based on Irish history but I didn’t think it would make such a mark,” Moore said.

The accolade probably saved the studio. “I think we might have fallen apart without it,” Moore said, though the Pixar film “Up” would go on to win the Oscar. Moore added that the nod “made us recommit to making features. It was an endorsement from the other artists in the industry saying they wanted to see more of what we were doing.”

For that life-changing nomination, the director credits GKids, the New York-based distributor of independent animation, which has released all of the studio’s films stateside (including “Wolfwalkers” theatrically). “If it wasn’t for GKids picking it up, we would never have gotten the Oscar nomination.”

Then an infant company born out of the New York International Children’s Film Festival, GKids set up an Oscar-qualifying theatrical run and carried its first awards campaign on behalf of the movie.

With renewed interest in Cartoon Saloon and extra support from Screen Ireland (formerly the Irish Film Board), Moore embarked on “Song of the Sea,” his second movie in the trilogy. This time shape-shifting selkies were the focus. It was during this process that Moore made it his goal to keep the spotlight on his country’s heritage. “Song of the Sea” earned him and the Cartoon Saloon team a second Oscar nomination.

“We’re part of the rediscovery of Irish culture,” Moore explained. “We have had a strange relationship with how Ireland gets represented onscreen in other countries, and so we wanted to speak for our own culture for the next generation.”

Moore’s wife is a teacher at an Irish language school, so preserving their nation’s native tongue was also a priority for him. All of Cartoon Saloon’s movies and shows have Irish-language versions.

With “Wolfwalkers,” the final installment in the trilogy, the studio made a conscious decision to create a larger action adventure. Set in 17th-century Kilkenny, the film plays as historical revisionism wrapped in a fantastical tale where humans, while sleeping, can turn into wolves. Artistically and narratively, it’s their most ambitious undertaking yet. Initially, Cartoon Saloon shopped the project to Netflix, but when the streaming goliath passed, Apple stepped in.

Released by GKids on 500 screens across the United States last month and on Apple TV+ Dec. 11, the movie has received glowing reviews and has been the subject of loud awards chatter.

For now, Moore is ready for an inspiration-replenishing sabbatical. Up next for Cartoon Saloon is “My Father’s Dragon,” which Twomey is directing and which is scheduled to premiere on Netflix in 2021. Based on a 1948 children’s novel by Ruth Stiles Gannett, the fable follows a young boy searching for a dragon on a magical island.

For Cartoon Saloon, a venture born out of the friendship and a shared love of drawing among Irish kids crafting wondrous worlds, the journey so far had been grand.