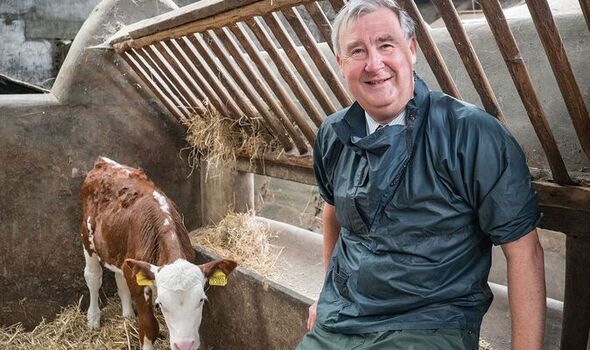 Peter admits he thought a programme about country vets would not last beyond the pilot episode in 2015 but as the 15th series airs on Tuesday he is “proud” it continues to appeal to viewers of all ages. The new series has a mixture of old and new characters, including young vets from a Huddersfield practice which show how the profession is evolving, reveals Peter.

This series also follows the vets in their private life, including seeing his partner Julian Norton celebrate his 50th birthday and later the wedding of Huddersfield-based vet Matt Smith.

Peter began his career working in the Yorkshire Dales alongside Alfred Wright, who used the pen name James Herriot to write the All Creatures Great and Small books, which is also a new Channel 5 series.

He added the remake is “fantastic” and it was lovely to see the people he grew up with being portrayed so well on the small screen.

Speaking of the ongoing popularity of the Yorkshire Vet, he said: ”This is something I scratch my head on a regular basis but I think it’s a mixture of things really.

“It has to be said Channel 5 is in love with Yorkshire, as I am and I never fail to plug Yorkshire.”

He once asked his old boss, Siegfried Farnon, where he was going for his holidays and Peter recalled: “He said ‘Peter why would I want to go anywhere, I have got everything I want here in Yorkshire’. I did not fully appreciate those comments at that point.

“We have got fantastic countryside.

“Apart from that, we have got some lovely characters. Yorkshire people are very down to earth, they call a spade a spade but they are the salt of the earth as far as I am concerned.

“It’s the mixture of the countryside, the characters, the people and culture we have in Yorkshire as well as Yorkshire is very diverse.

“When you throw all this into the mix then I think that is probably what makes it a success.

“There is one thing that I am really proud of in the Yorkshire Vet, it appeals to children of four years of age to people in their 90s. I can’t think of another programme where that occurs.”

The new series follows the vets out of hours, including when Peter goes sea fishing with Whitby-born vet John Whitwell, a partner at Green Lanes Vets in Kirkbymoorside.

All Creatures Great and Small was originally broadcast from 1978 to 1990 and its remake now in its third season starts on Channel 5 on September 15.

Peter said: “It’s lovely to see the characters, the real people I grew up with as a veterinary student, and see them portrayed in a slightly different light to how they were portrayed the first time round.”

The actors in the original series probably had it “easier”, said Peter because “they could actually meet the people that they were portraying.

He said: “I have the utmost respect for what they have done.”

Peter has a children’s book out later this year and a book detailing his past patients in Tails and Tales of a Yorkshire Vet out next year.

Recalling his favourite patients, he said: “I have different ones at different times.

“I love spring, lambing time, that’s probably my favourite time of the year because it is a sign of new beginnings and fresh hope.”