Home » TV and Movies » This Is Us' Mandy Moore Attended Rebecca's Funeral in the Series Finale: 'I Just Wanted to Be There'

This Is Us' Mandy Moore Attended Rebecca's Funeral in the Series Finale: 'I Just Wanted to Be There'

When it came time for Rebecca’s funeral in This Is Us‘ series finale, the actress who played the Pearson matriarch for six seasons thought it would be proper to pay her respects like everyone else.

So Mandy Moore made sure she was on set while Rebecca’s sendoff was being filmed, she tells TVLine.

“I did make an appearance. I just popped in, because we were shooting a scene later in the day, and I just wanted to be there. Some of my friends were wrapping,” Moore says, referring to other cast members who shot their final footage in the series that day. 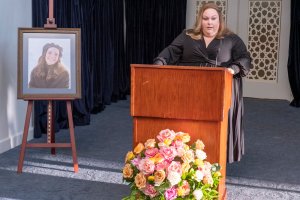 Though you didn’t see her on camera during the proceedings, Moore was there behind the scenes as Randall, Kevin and Kate and their families said a formal farewell to their beloved mother and grandmother. (Read a full recap of the episode.)

“It was really strange, very meta, being present at someone’s — like, your own — funeral and hearing what someone would say about you,” she recalls. That said, “It was really beautiful,” she adds. “It was nice to be around. The entire cast was there.” — With reporting by Diane Gordon

Make sure to check out our full coverage of This Is Us‘ series finale, including our burning questions chat with executive producer Dan Fogelman and our deep dive into that last flash-forward.