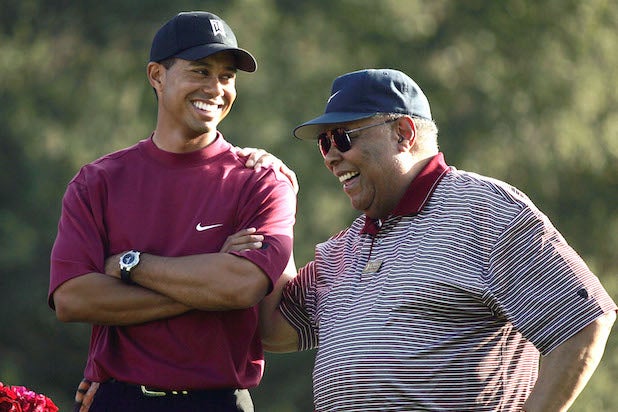 Hollywood loves character-driven stories with a meteoric rise, a dramatic fall and the ultimate redemption. Tinsel Town is going to love HBO’s Tiger Woods documentary, and so will viewers — and it’s only going to take two minutes to hook you.

“Tiger,” from directors Matt Heineman and Matt Hamachek, has an excellent opening scene, which viewers will see Sunday from 9 p.m. ET to about 9:02 p.m. ET. The cold open combines never-before-seen footage from Eldrick “Tiger” Woods’ dad, Earl, speaking glowingly about his boy at the Haskins Collegiate Awards Banquet with a childhood Tiger making sure “daddy” just saw his brilliant iron shot from the fairway. Earl’s audio continues over a signature Woods win at The Masters, and then ultimately, laid on top of police-station footage from Tiger’s 2017 DUI arrest.

“Both of us had read that and sort of thought that, well this would be a fascinating way to start the film because I think introducing our film through Earl’s words was always going to be fascinating,” Hamachek said. “The problem was that, while Gary had written about it and several people had sort of taken what Gary said and wrote it and used it and regurgitated it, nobody had ever seen the actual footage or heard Earl’s words before. This was really just sort of cocktail napkin scribblings of a journalist who was there.”

A month into making their movie, the Matts reached out to the Haskins organization.

“One of the things that is so fascinating about Tiger and these people in his life and the people that have access to his footage, they’re all very, very protective of him. And I think that one of the things we had to do with Haskins, in terms of getting access to their archive, was to convince them that we were making a very complex sort of nuanced portrait of him, that it wasn’t going to be salacious and it wasn’t going to be a puff piece on Tiger,” Hamachek continued. “And once they understood that we were doing that, probably after eight, nine months of talking to them back and forth, they finally agreed very close to the end of our filmmaking process to let us have the footage. And once we did, it was clear that this was going to be the beginning of the film.”

If you’re wondering, Heineman says they reached out to Woods to request his participation in “Tiger” even earlier than that — on “almost on Day 1” — and then again later in the process. Both times they were told by Woods’ camp that “due to a preexisting relationship” he was not able to take part in their project, Heineman said.

Woods has a TV deal with The Golf Channel. That is either a legit or convenient (polite) excuse.

Woods’ ex-wife, Elin Nordegren, also declined to be interviewed for the documentary. Knowing the subject matter, Heineman and Hamachek were never going to get either of them.

Instead, HBO’s two-part “Tiger” doc is driven (that’s a golf pun, get it?) by never-before-seen footage and revealing interviews with those who were once close with Woods, including his former caddy and close friend Steve Williams; Earl Woods’ friend and biographer, Pete McDaniel; Tiger’s first love, Dina Parr; and Rachel Uchitel, the woman at the center of the sex scandal that forever altered Woods’ world.