Home » TV and Movies » Too Hot To Handle: Why did Harry and Francesca split up? Stars open up on romance

Too Hot To Handle: Why did Harry and Francesca split up? Stars open up on romance

Netflix dropped Too Hot To Handle last week and the show has already proved to be a hit with audiences. The series can be summed up as Love Island with the naughty twist. The show saw a group of unsuspecting, promiscuous singletons forced to swear off sex for a month in the hopes of bagging a huge cash prize.

WARNING: This article contains spoilers from Too Hot To Handle

Too Hot To Handle aimed to create deep emotional connections and looking past the more superficial elements.

The sparks started flying early on between Australian Harry Jowsey and Canadian model Francesca Farago with the pair becoming the first to break Lana’s rules.

However, there was one moment when it looked like the twosome could be on shaky ground.

After locking lips, Harry suggested they should just go all the way and have sex, given they’d already kissed. 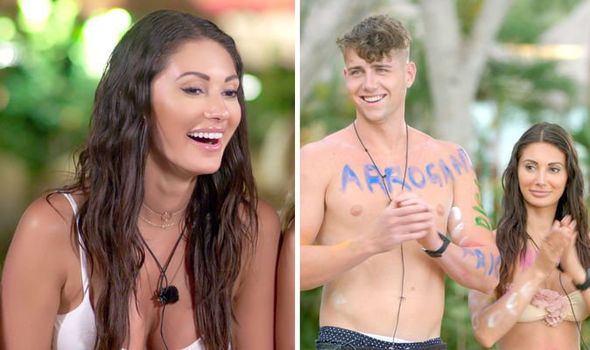 But there was a twist. Their dalliance caused discord after Harry suggested it was Francesca who initiated the smooch and their fledgling romance was put on ice

After falling out, Francesca had a brief flirtation with Kelz Dyke but she eventually decided to give Harry another chance.

As the show went on, the pair developed a strong bond and got to know each other better.

By the finale, Harry and Francesca declared their love for each other and it appeared things were going well.

Why did Harry and Francesca from Too Hot To Handle split up?

Too Hot To Handle couple Harry and Francesca are officially an item and confirmed their relationship status recently on social media.

Francesca posted a snap of the couple together to her 2 million Instagram followers and captioned the photo: “Always been you.. @harryjowsey.”

He responded by sharing a video with his 1.5 million followers, which featured the loved-up couple kissing and captioned it simply: “Thank you @francescafarago.”

Nevertheless, in a recent interview with Glamour, Harry and Francesca revealed they temporarily split up for a short while after the series ended.

She told the publication: “We broke up for a few months.

“It was probably the best thing that could’ve happened because, when we got back together, we were stronger than ever.

“We just needed a few months to debrief. Now that we’re back, everything’s been amazing and couldn’t be happier with our relationship.

“I mean, minus the fact that we’re not in the same country right now. Other than that, it’s perfect.”

YouTube star Harry went on to explain the reasons behind their temporary break, saying they had a few “miscommunication areas” and didn’t “see eye to eye” on some things.

He also said the long-distance between the pair added to the split with Harry living across Australia and New Zealand at the time while Francesca was in Vancouver, Canada.

Harry said: “I was just packing up my life to get ready to do the big move. So it was a massively stressful time, and I think I dumped a lot of my stress and pressure on Francesca.

“When we broke up, we just didn’t really know why. As soon as we saw each other again, we were like, ‘Hey, why did we break up?’

“We had to have that conversation because we were trying to figure it out.”

Francesca said the break-up “needed to happen” as it allowed them to take stock of everything and ultimately made them “stronger” when they rekindled their romance.

Harry is now living in Los Angeles while Francesca is in Canada, which means they’re geographically much closer together.

Unfortunately, the coronavirus pandemic means the pair are on lockdown and can’t physically be together, relying on video calls.

Reflecting on their future, Harry said Francesca was looking to move to L.A. and possibly getting married.

He added: “We’ve got a shared folder of wedding rings. So yeah, we’ve talked about it.”

Too Hot To Handle is streaming on Netflix now