Tyler Cameron Was Spotted Working Out Shirtless With a ~Mystery Woman~

Attention @ people who are obsessed with Tyler Cameron and Hannah Brown’s relationship: Tyler was just spotted working out shirtless with a ~mystery woman~, which…could mean literally nothing. Or could mean something! Whomst knows. 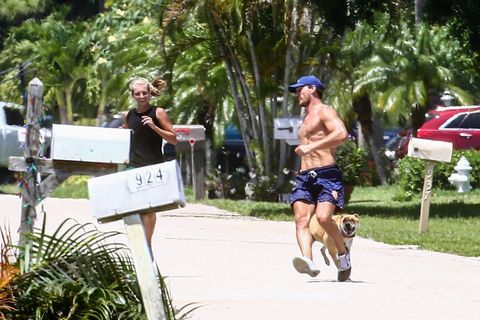 According to TMZ, Tyler and his workout buddy stepped out Wednesday in Jupiter, Florida, for what looks like a casual (and hopefully socially distanced) run. Let’s not jump to conclusions about these two (it’s possible for two people to have a platonic relationship, lol), but for what it’s worth, Tyler and Hannah Brown are not dating. Tyler confirmed as much during an Instagram Live with fans, saying “No, I’m not dating nobody.”

Meanwhile, Hannah also confirmed that she’s single while talking about babies on Instagram Live, saying “Also, I don’t…you have to have a significant other for that. And I don’t. So. It’s not really….”

Hmmm…I mean, clearly Tyler and Hannah aren’t together at the moment, but there’s no denying that they had a major vibe while quarantining with each other a few weeks ago. Plus, let’s not forget that a group of simply iconic fans found evidence that they were sleeping in the same bed, just sayin’!