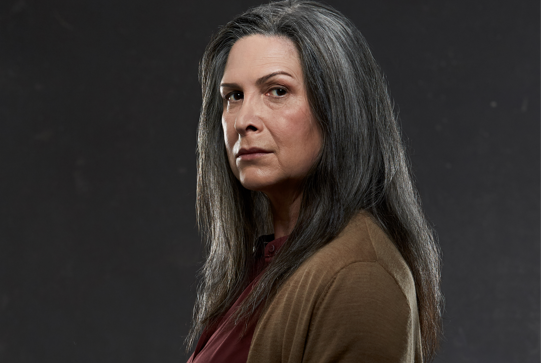 It may be the final season of much loved prison drama Wentworth, but the iconic Pamela Rabe has promised Metro.co.uk that the juiciest stuff is yet to come.

Fans have been invested in her complex relationship with Vera Bennett and as Joan Ferguson looks set to expose herself once more with revenge in mind, Pam has also indicated that her enemies should be very worries as the drama heads to a finale.

So what better time than now to get all of the gossip?

Was it fun to play the two characters with only Joan knowing at the moment that she is Joan?

It was strange and fun. Playing this role and being in the series has thrown me so many curveballs. I thought I was out of it – I was in a box in a shallow grave! To get invited back and to then to be thrown a curveball of losing my memory as a character. There’s a lot of tension going on with the fact of how long can Joan keep it a secret, given what she’s seen in that first episode. Particularly that she’s having a lot of unbidden urges, some of which are quite delicious, but some that might get her into trouble, because what she’s aiming for is a trial where she’s exonerated, and that’s going to rely on her keeping her murderous impulses under control.

Fans have picked up on the fact that when she saw Vera, she didn’t have a murderous fantasy. Should they be looking to that?

I think Joan will be. She felt she was on a role and then got quite confused and perplexed that she didn’t have that fantasy. That’s such a delicious relationship between those two characters. And that’s one of the things I remember saying when they phoned me up and asked me if I wanted to come out of the box again. I really wanted to be convinced, and assured that it wasn’t so far-fetched that the audience wouldn’t go on the journey with us. It needed to have enough credibility.

I’ve loved playing this character who’s pretty high gothic on occasion, but I’m still determined to keep her based in an emotional truth. To be given the challenge of being Kath Maxwell for a season and then through some vicious acts on the part of Vera Bennett, to have that memory knocked back to place. But then working out how to reconcile being those two people living inside the same body, I think that’s part of the excitement and the entertainment of playing it throughout this series. And that relationship with Vera was very much at the crux of that. Some very complex feelings going on there, some of which are vengeful, and some of which are softer.

Do you think if anyone is likely to unmask the fact that Joan’s memory is back, it’s likely to be Vera?

The other thing when they asked me to come back was: ‘Please, can I have lots to do with Kate Atkinson’. They’ve given us a lot of stuff to play with, and a lot of what goes down in these final episodes pivots around the relationship between Joan and Vera.

The people who wronged her, should they relax – or are they very much still in danger?

I think there are a few people who should be sleeping very easy now that her memory is back. One of the wonderful things to play is that she’s never been overburdened with self-knowledge. She’s found it very difficult to be in contact with her emotions. They’ve been drilled out of her. She never questions any of the reasons for her actions. And I think the experience of being Kath Maxwell for those ten episodes have awakened something. Now that Joan has come back to join this other part of herself, there’s a lot more for her to deal with on her plate. There is a struggle to control parts of herself she’s never had to address before, and that could be dangerous for a lot of people!

Are you happy with the final outcome for your character?

In the end, I think that’s sort of irrelevant, because I think it’s important that the audience – the fans – are satisfied and I would like to think that they will be. Nobody will ever be satisfied about everything, there’s a whole lot of people who are not satisfied that Bea Smith died at the end of Season 4. There will always be people screaming at their television sets – hopefully! – but there will be an equal number squealing as well!

I would hope on some level that there’s a sense of catharsis or release. Certainly, it was there for the producers and the script department. We were meant to be wrapping up at the end of Season 7 and suddenly the phone call came through: “Let’s go! 20 more episodes, make it to 100 episodes.” It’s a real landmark in Australian quality television. It gave the writers a chance to properly complete these stories that they’ve written with such care and detail. All these stories that have been seeded since Season 1 get the chance to come home. That, I hope will give fans a lot of satisfaction. Even though they may send a baseball bat through their television screen!

Is it a bit strange to be back talking about Wentworth when you wrapped so long ago?

Not really, because that’s kind of the nature of the game! Every time we did a season, it would be five months of the year and then I would be going off and doing other projects, and then I’d be coming back. This feels a little bit the same, except for the fact that I did think I was out of the picture by the end of Season 5 and then popped up again by the end of Season 7.  I’ve had several bites of the cherries!

In the middle of this pandemic, time conflates and collapses in such a strange way. It feels like only yesterday we filmed this stuff, and then all these rolling waves of Covid Melbourne is in. In what they’re calling the fourth wave, we’re in our sixth hard lockdown, were we’ve got curfews of 6pm to 9am. We’re only allowed to leave our houses for strict reasons. That was the conditions under which we shot these final episodes, so it feels like Groundhog Day so it doesn’t feel so strange.

Have you got any projects you’d like to do or anything else in the pipeline?

So many things! I’m in the middle of something at the moment, but because of this hard lockdown we’ve had to press the pause button. So, we’ve been doing some Zoom rehearsals, it’s for a stage piece, a fusion piece with Stephanie Lake dance company and a theatre company. A text and movement piece at the Malthouse theatre called Monsters. I’ve got a number of theatre projects that are forming. Everybody is trying to stay light on their feet and keep planning, and keep dreaming. But you have to be prepared for anything to collapse at any given moment.

I also have big dreams to do some more screen work and there’s lots of chat around that. Kate Atkinson and I have great plans, we really want to do something together. Something completely different. But we just adore working with one another so much.