Home » TV and Movies » When did Barbara Windsor leave EastEnders, what was Peggy Mitchell's exit storyline and what were her memorable moments?

When did Barbara Windsor leave EastEnders, what was Peggy Mitchell's exit storyline and what were her memorable moments?

PEGGY Mitchell was one of the most iconic characters ever to step foot in Albert Square.

But why did she leave the soap? And what were her biggest storylines? Here's what we know… 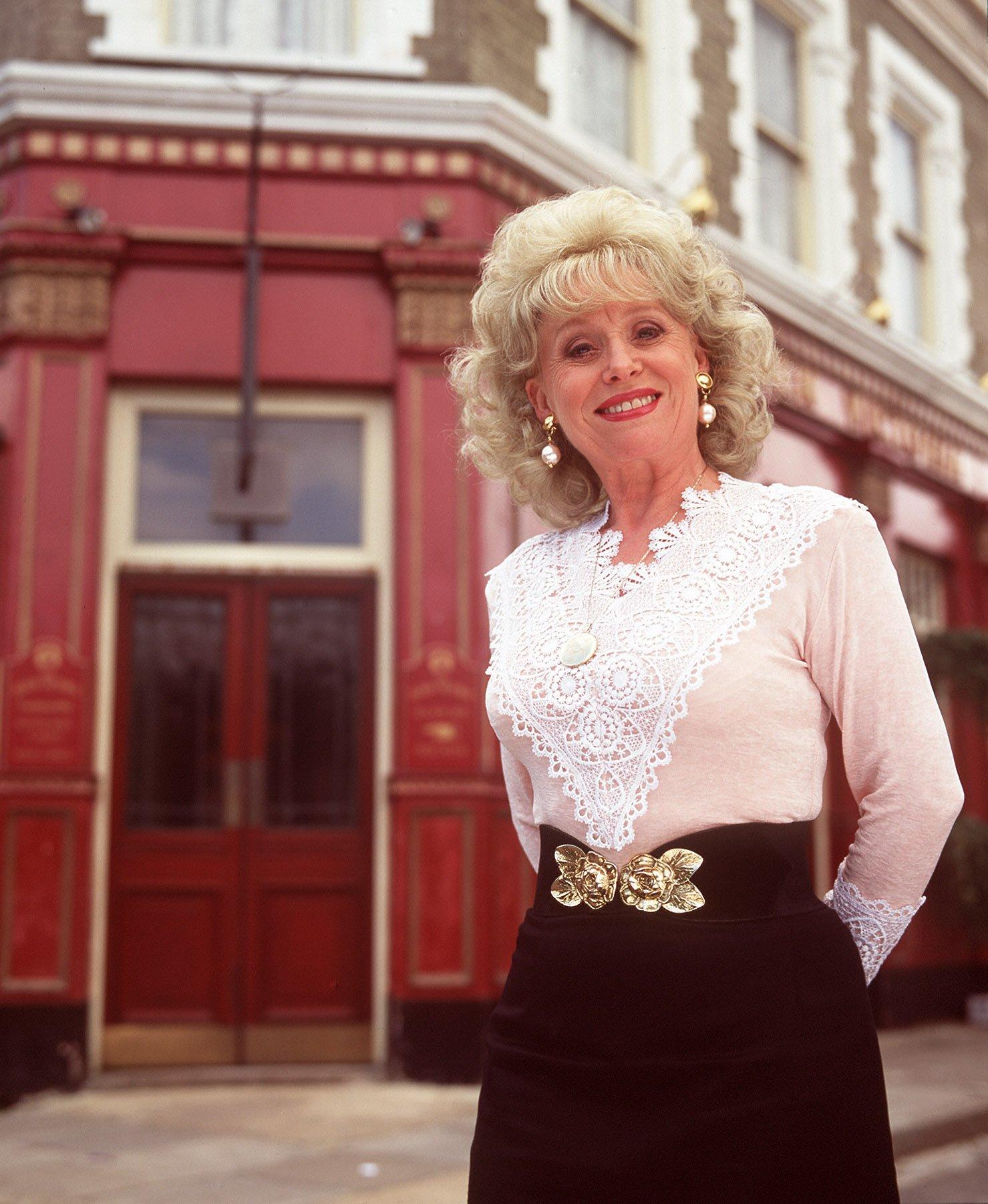 Peggy Mitchell’s granddaughter Louise — played by Tilly Keeper — gave birth to her baby in December 2019 and delighted viewers by naming the newborn Peggy.

Babs' husband Scott told The Sun at the time: “She thought what a lovely thing it is Peggy Mitchell will live on in a family member. What a lovely tribute.

“It made her quite emotional and I have been reminding her each time we watch the show every night.

“Each time her whole face lights up.” 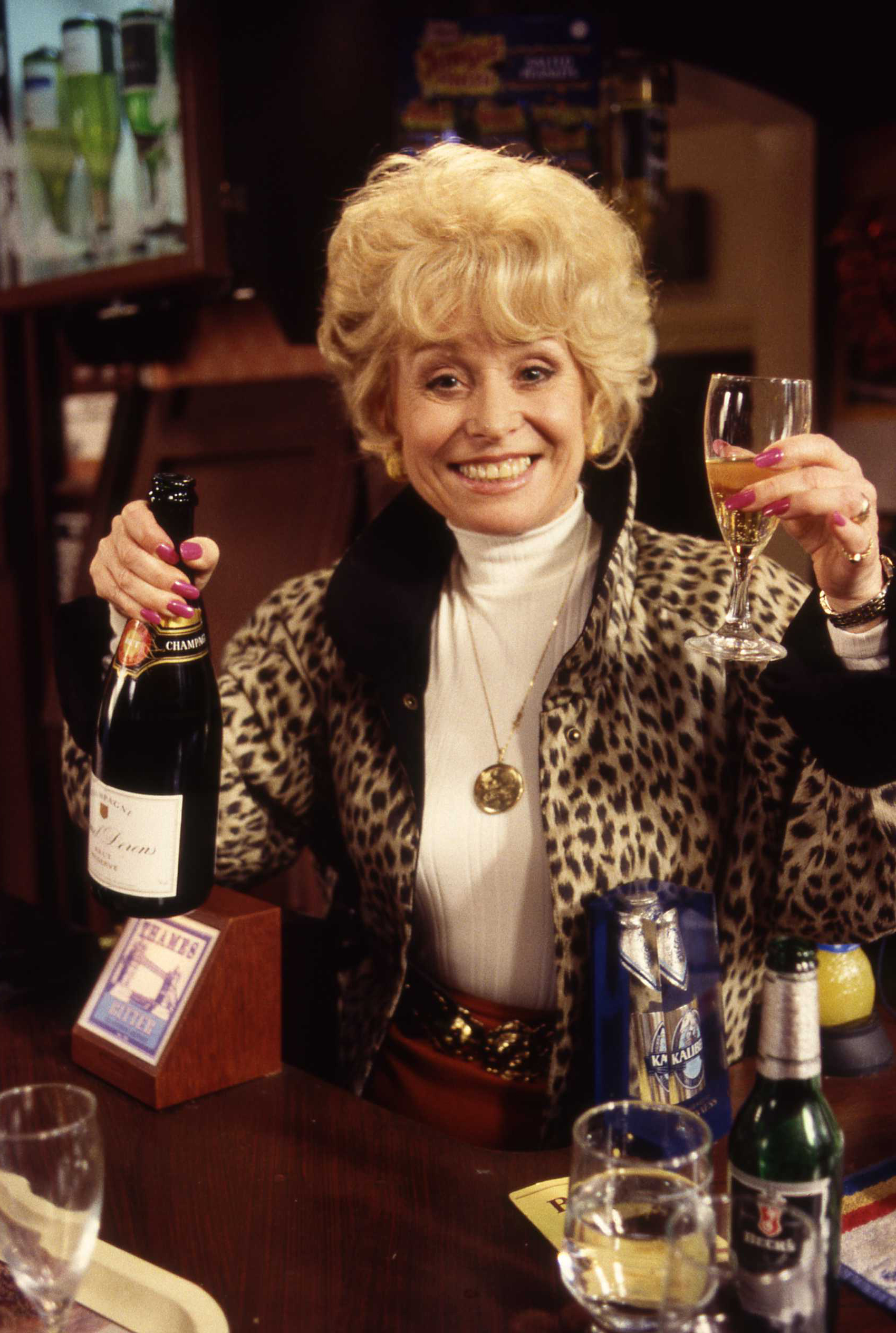 Actress Barbara Windsor became an instant hit when she joined the cast of EastEnders as the feisty Peggy Mitchell in 1994.

She played the matriarch of the Mitchell family and the no-nonsense landlady of the Queen Vic, with her famous line: "Get out of my pub!"

She continued the role until a debilitating case of the Epstein-Barr virus forced a two-year absence from the role between 2003 and 2005.

Babs rejoined the cast in mid-2005, initially on a one-year contract, though this was later extended.

In October 2009 Barbara announced she was to quit Albert Square, saying she wanted to spend more time with her husband. 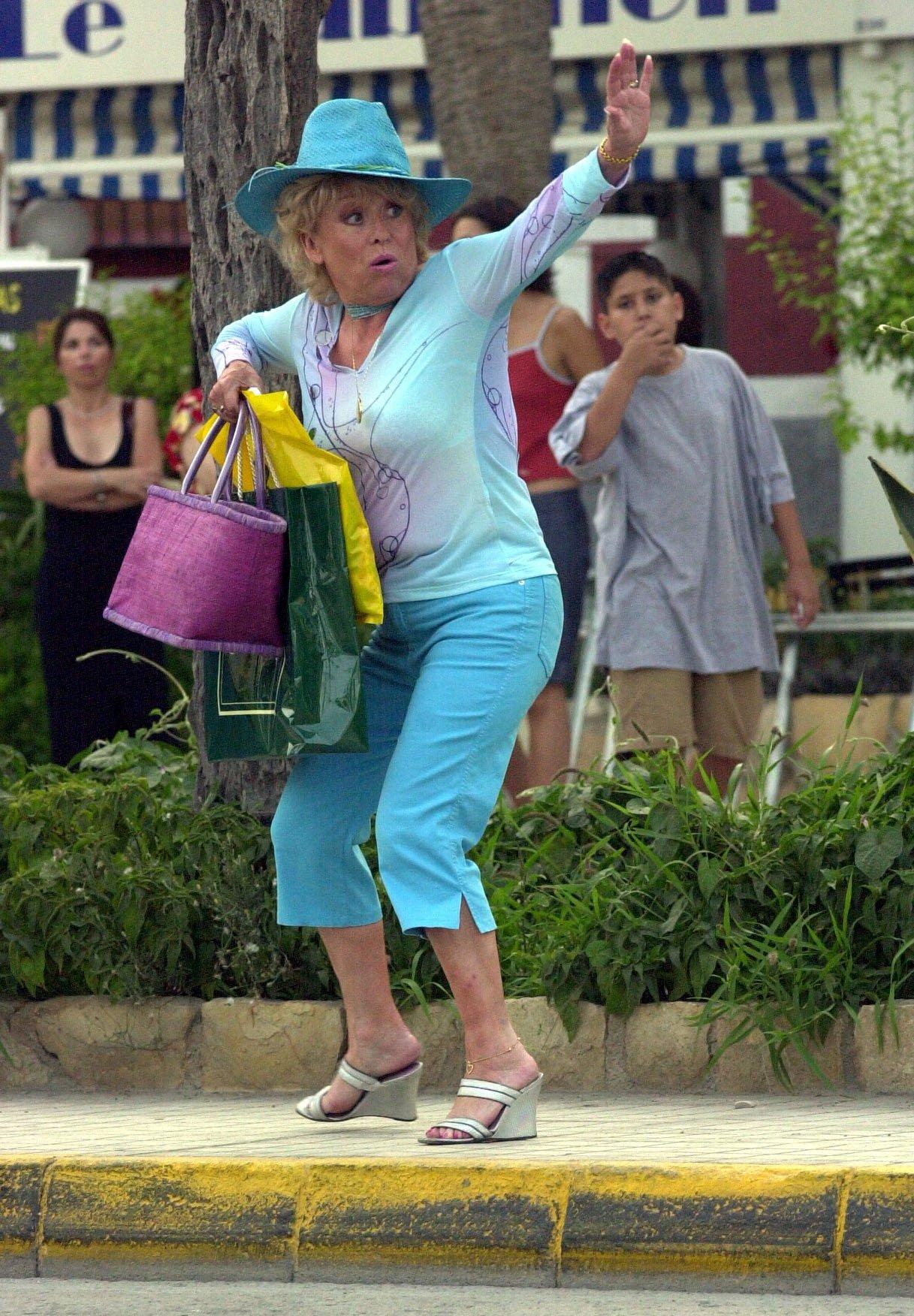 What were Peggy's biggest storylines?

Initially played by Jo Warne in 1991, the role was recast with Dame Barbara returning to Albert Square in 1994.

During her first episode, Peggy visited son Phil in hospital. “Can’t take my eyes off you, can I? Not for two minutes,” she said.

Dame Barbara immediately made the role her own and stuck around for over two decades. 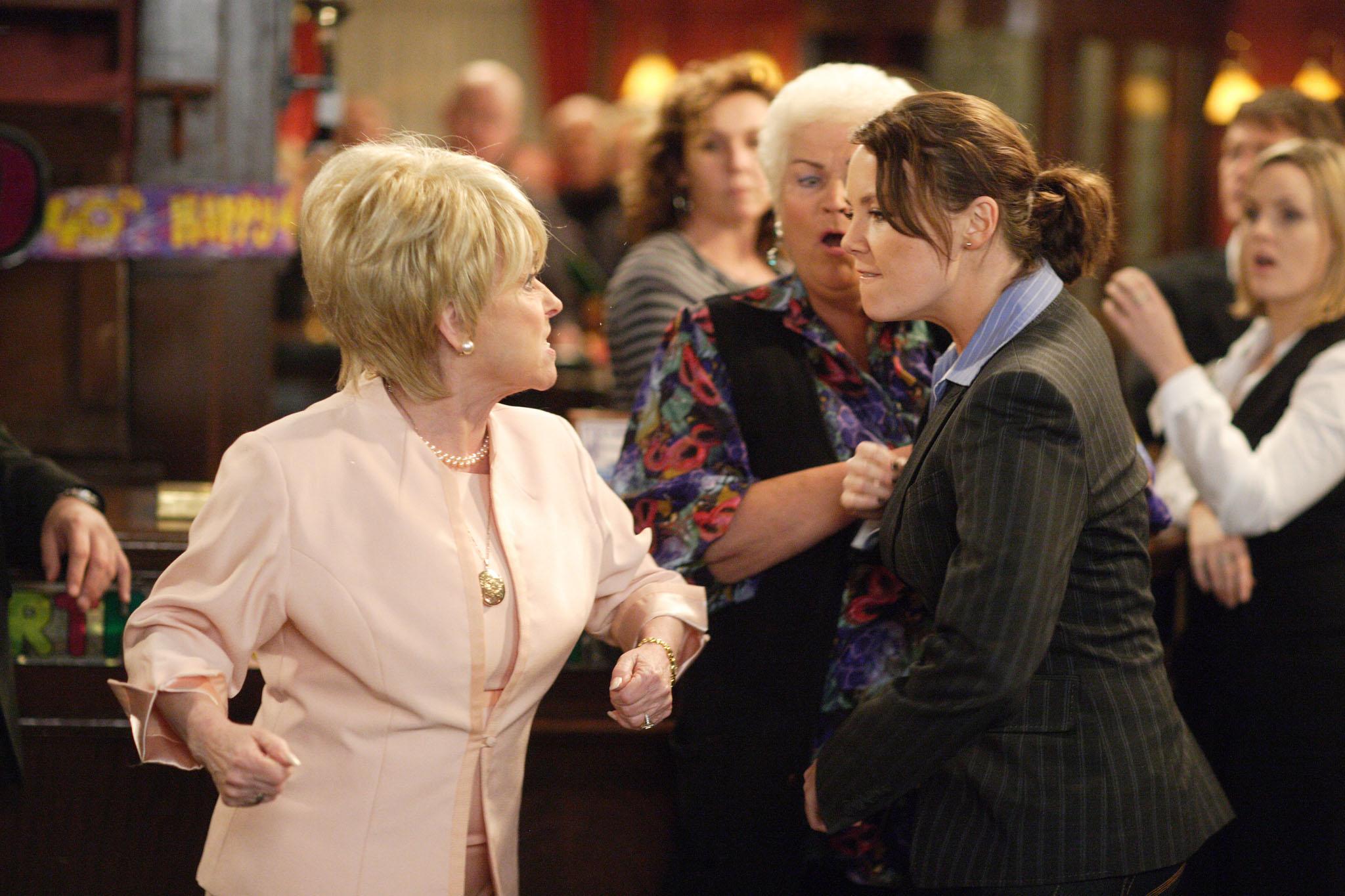 Back when Boris was the Mayor of London, he made a brief appearance on the soap.

After threatening to take Boris to task about the amount of litter in Walford, Barbara went weak at the knees when he entered the pub.

He and Peggy had a heart-to-heart where she informed him that she almost went into politics in a toe-curling episode of the soap. 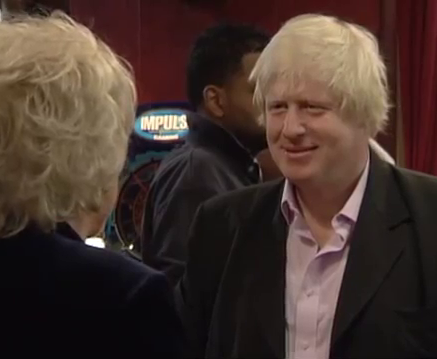 When Peggy was forced to sell the Queen Vic, she got into quite a tizzy about who’d be taking over the reigns.

The landlady was then shocked to her core when the new owner turned out to be none other than her former daughter-in-law Sharon.

Sharon nearly shocked Peggy out of her skin with the sassy line: “Hello Peggy – bet you never thought you’d see me again!”

Sharon might have stolen the show, but Peggy’s shocked face set the scene nicely for a duff-duff cliffhanger. 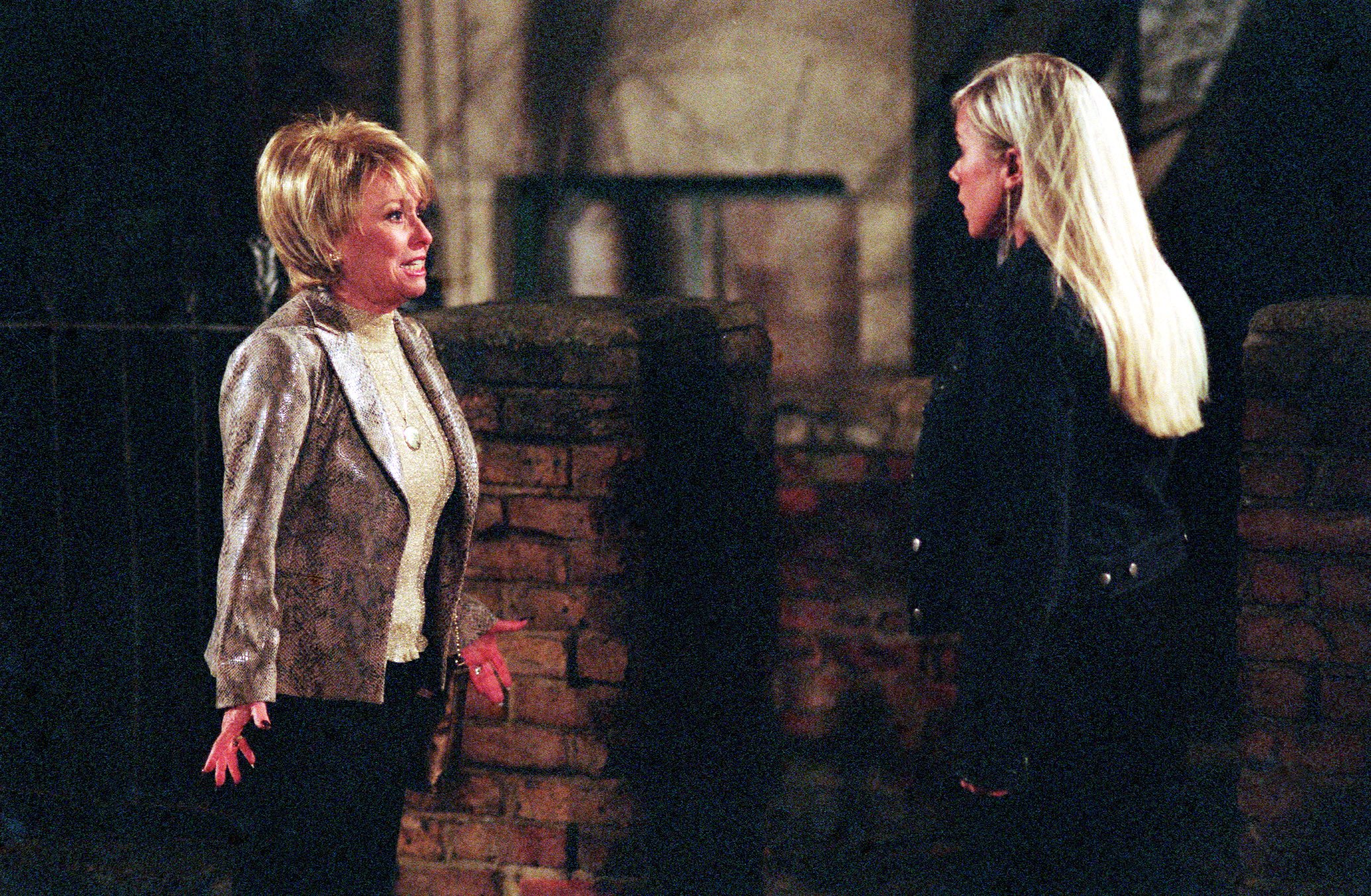 In 1996, Peggy learned she had breast cancer.

The cancer then returned in 1999 and Peggy made the decision to have a mastectomy.

Her illness then returned in her later years. 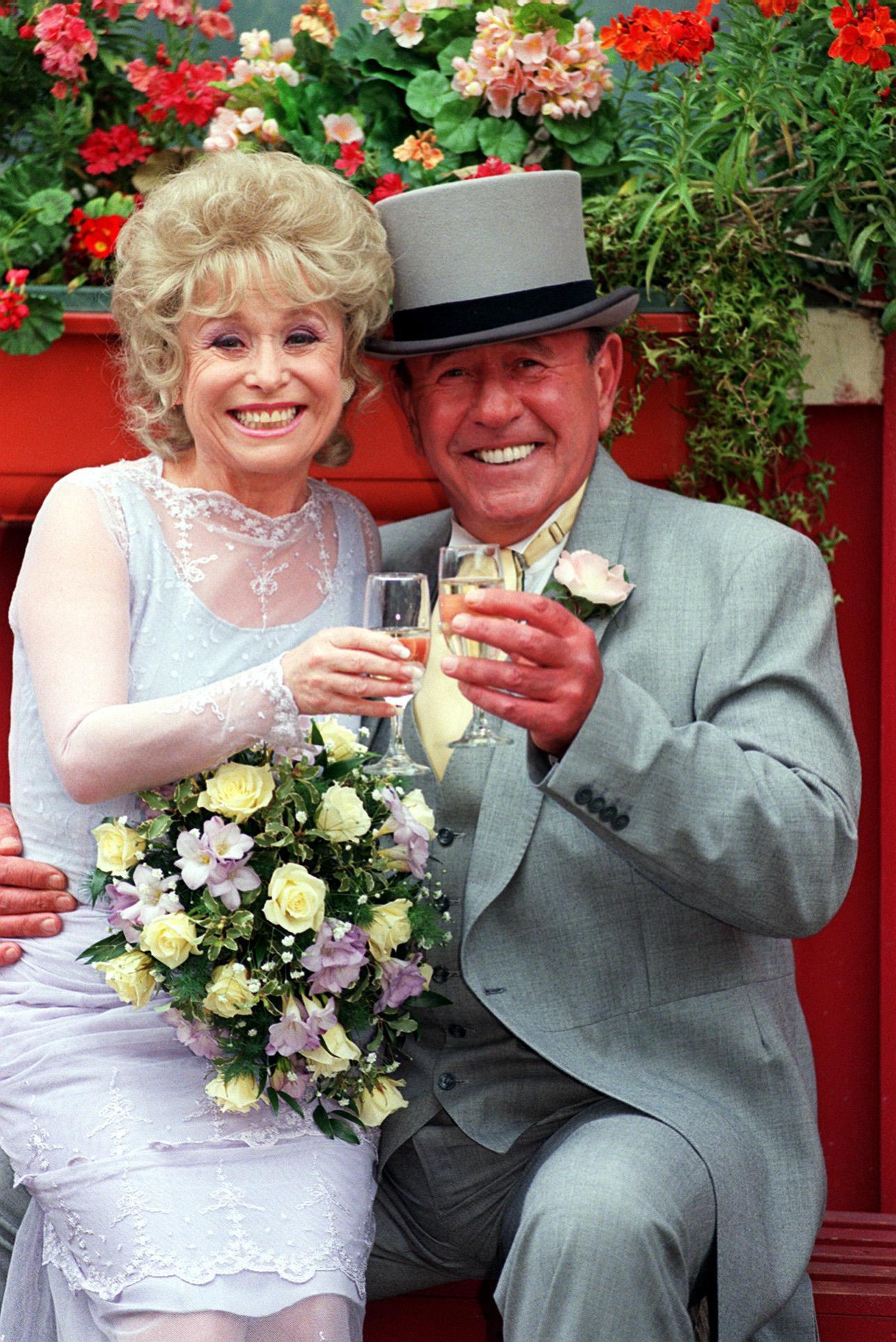 Peggy and Pat Butcher (Pam St Clement) had one of the most famous love to hate each other friendships.

The two were often frenemies – and often had explosive rows in the Queen Vic.

However, Pat and Frank had been having an affair.

The two lovebirds had planned to run off together, but Peggy found out and humiliated the couple in front of everyone in the Queen Vic.

However in later years Peggy and Pat eventually came to reply upon each other and had a very strong friendship. 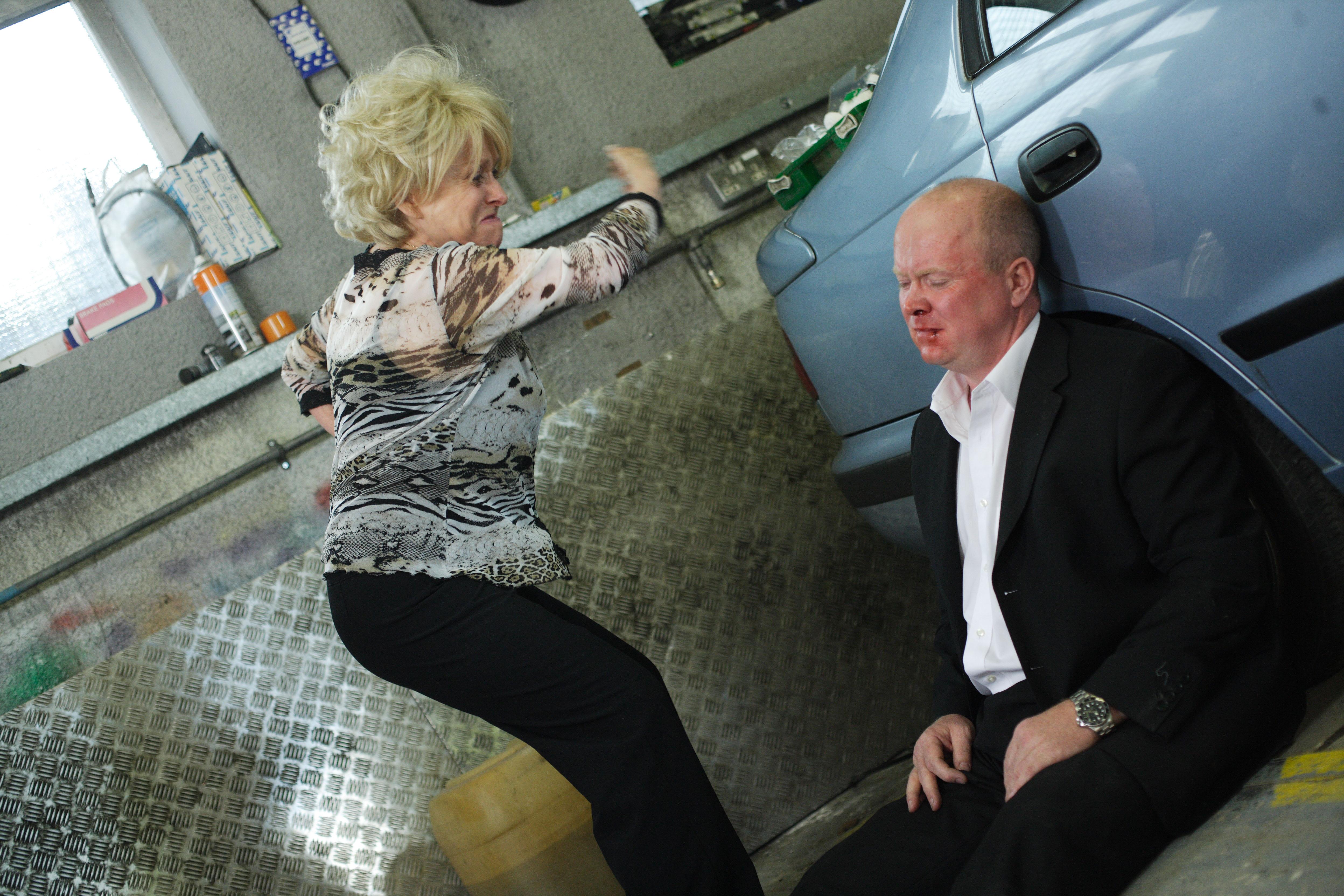 Peggy pushes Chrissie in a grave

In the early 00s Peggy’s daughter Sam Micthell (Kim Medcalf) was framed for the murder of Den Watts (Leslie Grantham) by his wife Chrissie (Tracy-Ann Oberman).

When Peggy discovered the truth, she stormed to his funeral and screamed: “Chrissie Watts! Murderer!”

She then lunged at Chrissie and pushed her into Dirty Den's grave and screamed: “Tell Den you’re sorry! Tell Den!" 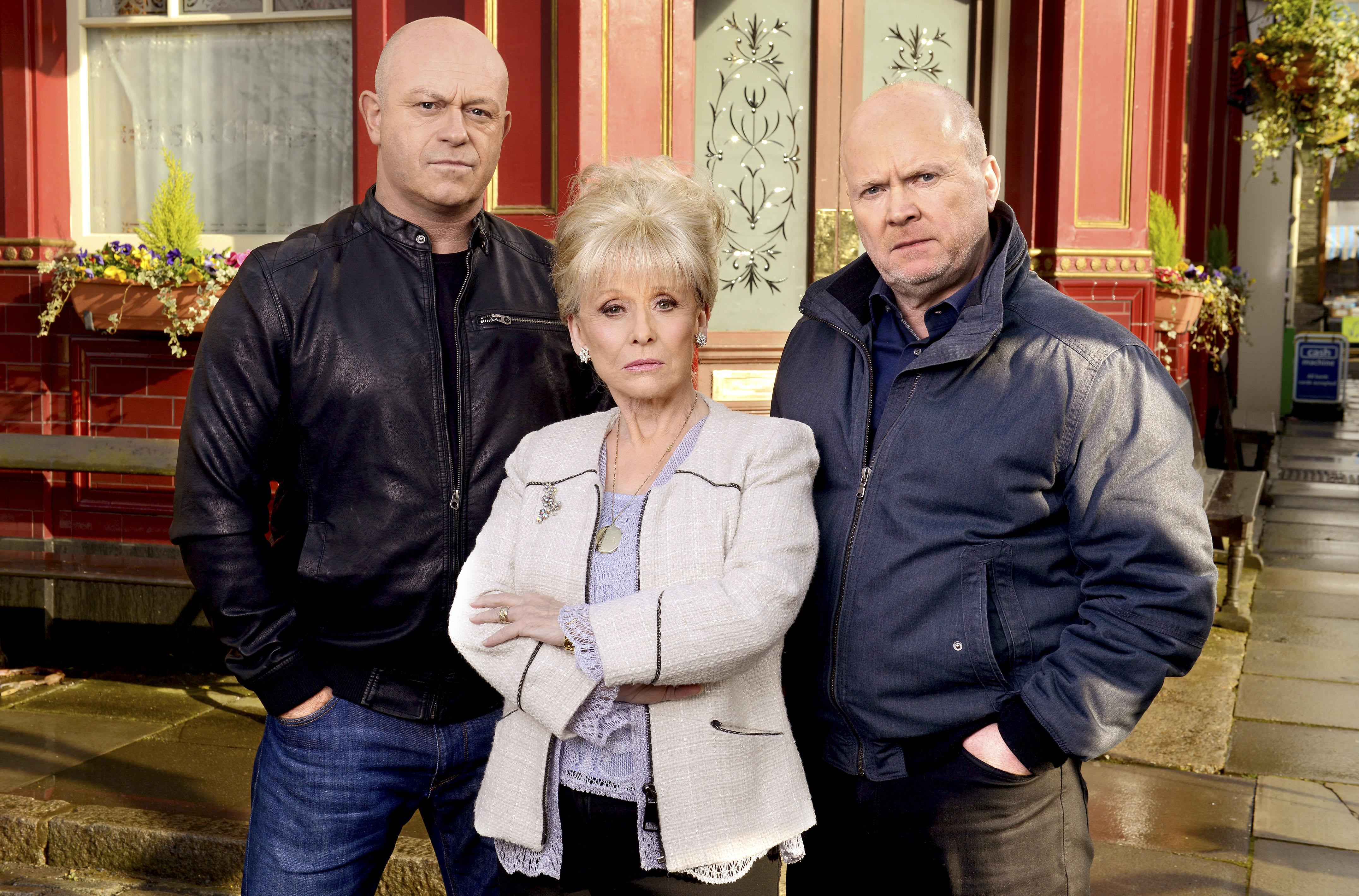 In 2010, Phil’s substance addiction spiralled out of control.

Peggy confronted her son, who told her she had pushed all her children away with her nagging.

This resulted in Peggy giving the mechanic an almighty slap. 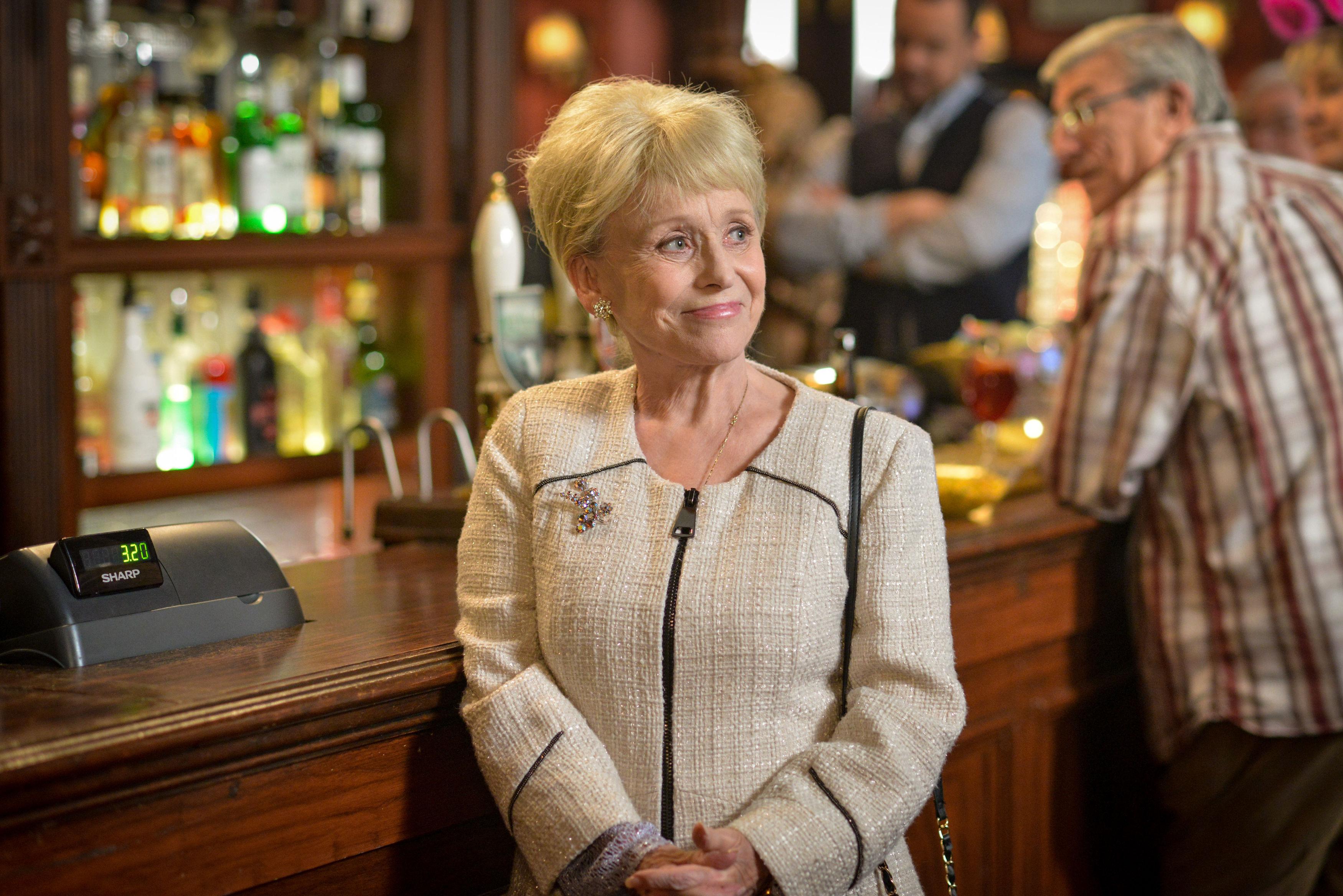 When did Peggy Mitchell leave EastEnders?

Her last appearance aired on May 17 2016 in a tear-jerking episode.

Her character took her own life after being diagnosed with terminal cancer.

The emotional scenes showed Peggy say goodbye to the Queen Vic pub she was the infamous landlord of.

On-screen sons Grant and Phil, played by Ross Kemp and Steve McFadden, were earlier seen trying to convince Peggy not to take her own life but her mind is made up — as she doesn’t want to let the breast cancer take over her body.

In her final moments she talks to a hallucination of Pat, whose character died of pancreatic cancer in 2012.

Peggy tells Pat: “I can’t be eaten alive. I don’t wanna be that little old lady in bed that needs looking after.

“I will go as I have lived; straight back, head high, like a Queen.”