As the rest of the film industry begins its tentative return to prepandemic normalcy, the announcement that Los Angeles’s ArcLight Cinemas, a chain that includes the Cinerama Dome, would close came as a shock to loyal moviegoers and filmmakers alike. Here, the director Gina Prince-Bythewood (“The Old Guard,” “Love & Basketball”) explains why the news was so devastating. These are edited excerpts.

The ArcLight is a place for people who love movies. If you’re a filmmaker, if you love movies, you just appreciated everything that [the ArcLight] put into making it a curated moviegoing experience. They always had the films that we wanted to see, but they also had special screenings of movies that hadn’t been out for years, and a balance between big blockbusters and independent films. They made it an event. We never had to go anywhere else but the ArcLight — because you knew it was an experience every time, and you just didn’t want to cheat on your theater. There was no reason to go anywhere else.

Ours was ArcLight Sherman Oaks, which was beautiful. The second you walk in, it’s about film. To the left was this very cool gift shop, which had film memorabilia and books, and then there would be the bar with mixed drinks but also great hot chocolate and coffee. There was a whole costume display from whichever film they were focused on, whether it be “Star Wars” or a period piece. [The concessions stand] was always packed because the food was really good — but there were tons of people working, so the lines moved fast.

They had this entire wall of movie posters, and as a filmmaker, you’re always hoping that your poster would show up there. “Love & Basketball” premiered at the Cinerama Dome, and that was incredible to have my first film be at this iconic theater, with the red carpet and the excitement of it, and to see my film up on the marquee. My husband’s film, when he wrote “Get on the Bus,” also played there. To take a picture of the marquee, to have your movie poster be on rotation, it was exciting. And it made you feel like you’re working on something. 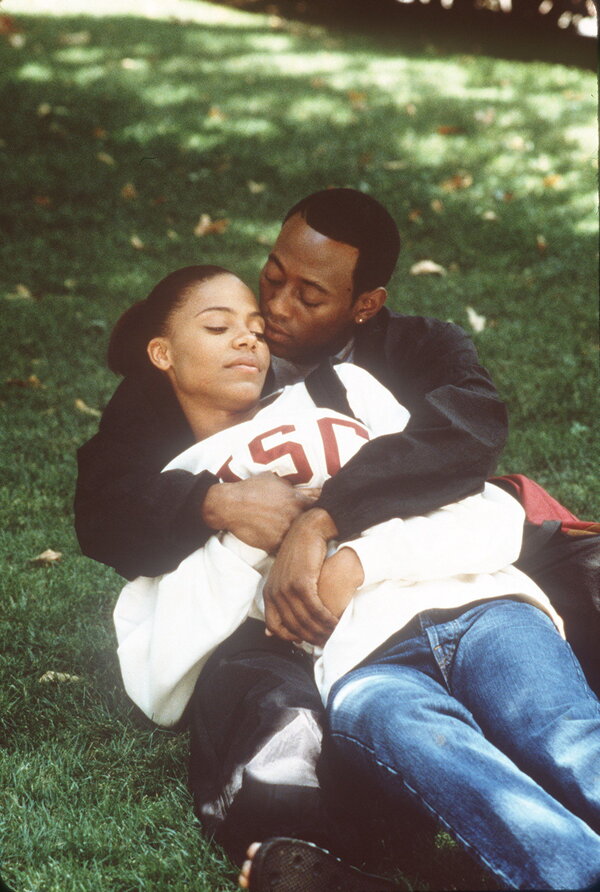 My husband and I, when we were dating, would go to the movies once a week. Nobody else at the time had assigned seating. You know when you used to go to the theater, and you’d have to get there super early, searching for two spots, and you knew where you’d like to sit and those seats are never available because someone’s there already, and you’re — you know, “Excuse me, pardon me, excuse me”? Here, you picked your favorite seat, you walked in and you sat down. Once we had kids, all of us would go to the exact same seats every time: F25, 24, 23, 22. They allowed us to be near the end, but also to put our feet up on a metal bar right below us. And as you wait, they always have great trivia going up on the screen and movie music playing, and then the usher would come and the experience will begin.

All the ushers and everybody who worked there clearly love movies: You could ask them which film they would recommend, and they would go into detail why they loved it. Right before the movie would start, an usher would come to the front of the theater and announce what movie you’re about to see, the running time, the rating and some little tidbit of information about the film. And it was always fun because there would be ushers who were completely shy, and it was probably horrifying for them that they have to do this; others would give these long explanations and you could tell that this was just their moment in the sun.

When “Black Panther” came out, we got our seats that we loved two weeks in advance. We knew that it was going to be packed. And the audiences there, there’s just a love of film. So you just knew that you were going to have fun with the crowd as well, because people clap at the end of movies they love and cheer during trailers they’re hyped about. I loved seeing other families going for that same experience, and then being able to talk about it afterward in the lobby. You knew the people were there to see the movie and they respected the filmmaking.

To hear that the ArcLight, of all theaters, was shutting down was a shock. It was kind of a blow to that fantasy that we were going to get back to where we were. Streaming has been great during this time, and it was incredible for “The Old Guard” to reach the global audience that it did. But I still love theaters. I love the collective experience of watching a film with people I don’t know who are all feeling the same things.