David Fincher’s “Mank” leads all Oscar craft nominations with six. And yet its greatest chance of a win rests with Don Burt’s meticulous production design of the iconic Hearst Castle and San Simeon compound. However, since he was working in black-and-white with set decorator Jan Pascale — his co-nominee — it was more advantageous to capture the spirit of William Randolph Hearst’s opulent retreat than trying to replicate it. For one thing, the colors would get lost, and, for another, they’d still be struggling to recreate all of the detail.

“Hearst Castle felt like something Hearst [Charles Dance] built as his Xanadu [from ‘Citizen Kane’], and now it’s maintained more like a theme park,” said Burt, who actually didn’t visit the landmark since they couldn’t shoot there. But he referenced plenty of images and studied its architecture and interior design along with the beautiful landscaping of San Simeon. “Hearst saw this as his own little castle in the world and his accumulation of art from Europe was representational of this extravagance and indulgence that he had.”

Hearst went on a spending spree throughout Europe in the ’20s, taking pieces of what he adored about each country and either purchasing it or replicating it back home. He thus transformed “his own little castle” into a mashup of Spanish Colonial, Greek Revival, Italian Renaissance, and classic Mediterranean styles. He even named his dining hall a refectory in honor of a monastery, which contained a ceiling from an actual Italian monastery along with a grand French fireplace, Flemish tapestries, a hand-carved Italian ceiling, and Palio racing banners hanging beneath it. Yet somehow all of these disparate styles fit well together.

For Burt, the design of Hearst Castle and San Simeon were representational of this hybrid style — a blend of fact and fiction, like “Citizen Kane’s” Xanadu. In fact, because it was shot in black-and-white by Oscar nominated cinematographer Erik Messerschmidt, this enabled Xanadu’s Gothic look to creep in as well. The first challenge was finding the right monochromatic look. “We did a lot of testing [with their iPhones] and started realizing there were certain colors that filmed extraordinarily in black-and-white,” Burt said. “Mustards, purples, lavenders. At the same time, we really struggled because we didn’t want to do sets and environments like carnival exhibits, so we worked hard to find neutrals and grays and browns that worked well so that when actors came onto the set they felt like they were in an actual space. Reds tend to go black, so those were avoided.”

The best plan of attack was to build Hearst Castle at Los Angeles Center Studios, particularly the sets for the Louis B. Mayer (Arliss Howard) birthday party seating area and the circus costume party in the dining hall. Originally, Burt tried to secure an actual location for the birthday party but that didn’t work out. “We knew we’d have to build the dining hall, and we came up with a rectangular configuration to emulate it,” he said. “The long, narrow table, the chairs, the implementation of tapestries along the side walls next to the serving tables. And, architecturally, we brought in some of the details of San Simeon, with the Gothic tracery in the doorways, and the large, ornate, stone fireplace. 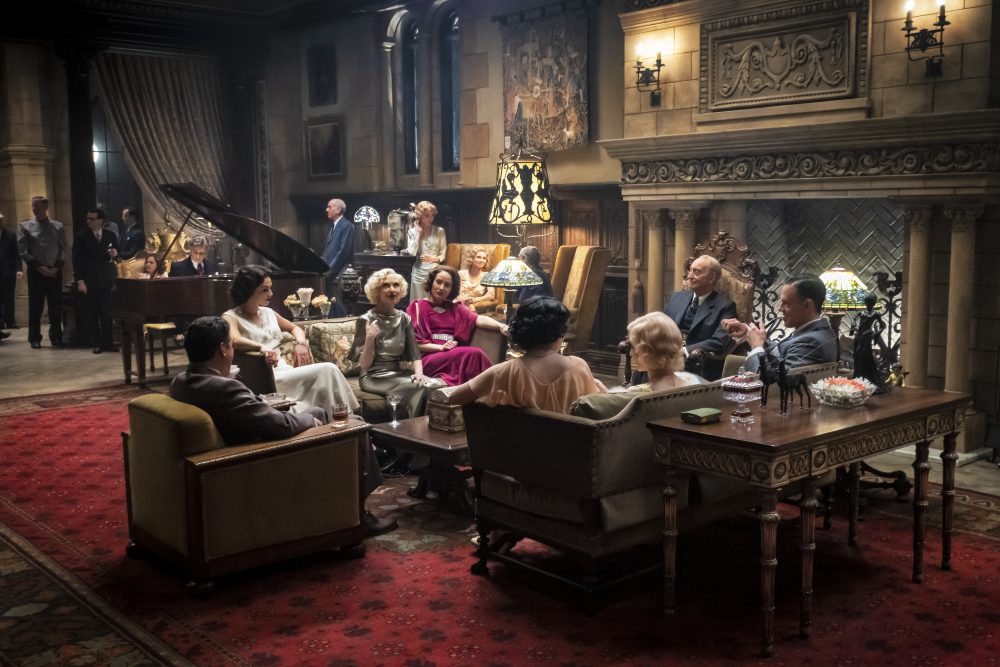 “But when we ran into an issue with Mayer’s birthday party, we took the set and reconfigured it for both,” Burt continued. “It was a separate space but reflective of being in the same compound. So we switched out and brought in different fireplaces and took out paneling on the walls and put in windows, we added columns and curtaining in certain areas, and we minimized the stone work on the side walls for the birthday party. But we shot that first so we reversed engineered it. We had six weeks to prepare for the dining hall scene.”

Fincher insisted on having open ceilings so that he could crane down from above in a traveling shot. This was undoubtedly a nod to “Kane” (shot by the legendary Gregg Toland), but, for the production designer, there was also a certain historical reference point as well. “It was reflective of a piece of research I had found that they actually had a shot from up high for one of the dinner parties,” Burt said. “I’m assuming it was just somebody up on a ladder, but it was always one of our hero references for the dining hall: three-quarter up at an angle looking down at the table.”

For the memorable organ grinder monkey monologue by Hearst, in which he escorts the drunken Mank out of Hearst Castle, they shot on a separate hallway set. “This was attached to the dining hall,” Burt said. “We tried to at least have it connected so we weren’t interrupting the dialogue into another location.”

The exterior of San Simeon for the memorable moonlight stroll between Mank and Hearst Castle hostess/actress Marion Davies (Oscar-nominated Amanda Seyfried) was shot day for night at Huntington Gardens in Pasadena and a private home. The challenge, once again, was to consolidate disparate Hearst styles while tying together the locations. “We took certain key reference elements from San Simeon and did our own version,” Burt said. “They have an abundance of stone balustrade, hardscape stone walls, and statuary, and we needed enough of it for their long walk and talk. And they have these sculpted light posts, which we put in each location to show that it was expansive and one piece of property. It was cobbled together but it all seemed to work.”