Home » TV and Movies » With ‘In the Heights,’ Jimmy Smits Sings a Little but Gave It a Lot

With ‘In the Heights,’ Jimmy Smits Sings a Little but Gave It a Lot

Why shouldn’t your morning stop at a bodega be worthy of a break-into-song moment? That’s the winning way “In the Heights” introduces Jimmy Smits’s character: He strolls into the corner store run by Usnavi (Anthony Ramos) to pick up his café con leche while cheerfully crooning, “Good mooorning, Usnavi!” In a musical filled with all sorts of twisty wordplay from the lyricist Lin-Manuel Miranda, somehow this simple line is the most sublime — and hey, who knew the Emmy-winning actor from “N.Y.P.D. Blue” and “L.A. Law” could carry a tune?

Directed by Jon M. Chu, the screen adaptation of the Broadway show casts Smits in the supporting role of Kevin Rosario, a car-service owner who’s determined to put his wavering daughter, Nina (Leslie Grace), through an expensive college education. But is that his dream and not hers? The characters have an awfully complicated clash that Smits was eager to take on, but first he had to make it through “Good morning, Usnavi,” the line that loomed above all others. Last month over Zoom, Smits told me just how much went into that brief moment.

These are edited excerpts from our conversation.

Are you prepared to have people singing “Good morning, Usnavi,” to you for the rest of your life? Have people already started?

I’m actually OK with that! On the family text thread that my kids and everybody’s on, that’s the way they’ll say hi now: Instead of, “Hey tio” or “Yo pops,” they’ll go, “Good morning, Usnavi.”

That’s your very first line in the movie. I would imagine there was a lot of pressure to nail that moment in cast read-throughs, since people don’t really know you as a singing actor.

That’s when you get, “Have you been in a musical before? I didn’t know you sang.” And I don’t! I don’t sang with the S-A-N-G. There’s some people in that cast, they can sang — I just tried to hold my own. All I know is that when I got through those first couple of lines, everybody was smiling. There were no people looking down at the scripts.

Still, you’ve done a little bit of in-character singing before in episodes of “N.Y.P.D. Blue” and “The West Wing.” And I know you did a cameo on “Cop Rock” back in the day, but I couldn’t find out whether they made you sing or not.

You’re embarrassing the hell out of me. No, I didn’t sing on that.

Jimmy, you appeared on “Cop Rock” and you didn’t sing? What’s the point?

That’s exactly right. Oh, man! Even on this, I had six lines that were musical, and I had four different vocal coaches. Warner Bros. was telling my agents like, “Really? Does he have to have two vocal coaches on each coast?” Yeah, because I wanted to be on point as much as possible!

And even though it’s just a few sung lines, they do convey a lot.

I appreciate you saying that because even with the three lines that are in that song, we did this whole character-based, psychological approach. It’s a switch-up from the rhymes that are happening, and it’s more your traditional thing. Originally I was like, “I’m going to make this count, and I want it to be big!” And they were like, “No, no, no. Let’s talk about the character and what’s going on there.” It was part of the exact same things that I had to do with the back-and-forth dramatic scenes in the family. 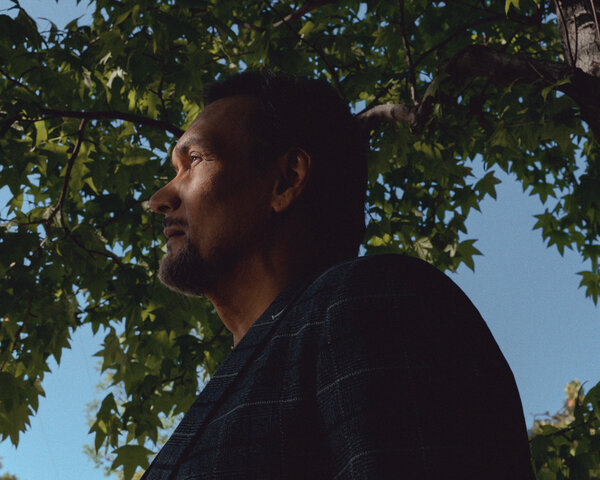 What did you do on set to get yourself into that musical mode?

I like to use music a lot, especially when I’m in prep for something, and I was playing my boy Carlos Gómez [who originated the role onstage]. I was playing “Inutil” over and over again, which is the song he sings from the Broadway version. So Carlos, he was with me the whole time.

And he does a pretty great “Good morning, Usnavi,” too.

Do you remember when you first met Lin-Manuel Miranda?

There was a friend of mine who worked at the Drama Book Shop who told me, “There’s these kids from Wesleyan doing stuff in the basement here. Jimmy, they’re the real deal.” And then a couple years later, I was at 37 Arts with my lady, seeing “In the Heights” Off Broadway, and we realized, “Oh, this is the kid that Stu was talking about. This is the new wave.” Next thing I know, he’s spitting rhymes for Barack and Michelle.

I remember telling them when they went to Broadway, “Anything you need from me …” He gave me a call one day and said, “We’re going to do the commercial for the show. Could you do the voice-over?” “Come on, man. Yes, I’m there!” During my first meeting with Jon, I actually referenced Michelle Yeoh in terms of “Crazy Rich Asians,” and I was saying, “I want to do what she did for that film. I want to help in any way I can.”

You grew up in New York. Could you relate to what these characters are going through?

I grew up in Brooklyn, but I lived all over New York, and we moved to Puerto Rico from 10 to 12. I went from listening to Motown and R&B and the Beatles to boom, I’m in Puerto Rico listening to Trio Los Panchos. Everything that I am now as an adult relates to that experience: Where do you fit in? I think all of the moving around has something to do with me doing what I do.

You had to learn how to play different sides of yourself to different types of people.

Absolutely. And in Puerto Rico, it was traumatic because I was the Yankee! But everything that I hold dear to me in terms of culture comes from that time that I can trace back. The speech that Kevin has about shining shoes? I shined shoes in the plaza in Ponce, I know what that was like as a kid and how it resonates. Even when I do Shakespeare and Shaw and Pinter, there are parts of me culturally that make all of those roles unique, but here there are things that I can really relate to because I can channel my tios, my uncles, and my parents and all their expectations and hopes and dreams on a wonderful level.

How did your family feel about you becoming an actor?

Well, I don’t come from a musical or theatrical kind of background. It’s not like my parents took me to the movies — I wound up doing the bulk of my work on television, and I think it has something to do with the fact that the TV set was the thing that we coalesced around as a family. But they were always very supportive, and I joke around about the fact that they would come see me do something like a Shakespearean play and go, “That was nice. Why does everybody talk like that?”

Did you know as a kid that you wanted to do this?

I knew pretty early. I went to George Gershwin Junior High School in Brooklyn, and if you did good in school, you could be part of the musical — “Damn Yankees” and “Carousel” and all of that stuff. After that, I went to Thomas Jefferson High School in a not-great neighborhood in East New York, and there happened to be this English literature teacher who I’m still very friendly with and he took us to plays. Seeing Raul Julia and James Earl Jones for the first time, they probably were the most inspirational to me, because I saw the parallels there: “That guy is from the same place Mom is from, and he speaks with an accent!”

And then there was another professor who was working at Brooklyn College, Bernie Barrow, who encouraged me. He said, “You’re showing this interest in the classics and you probably could go to L.A. and be the crook of the week on ‘Hill Street Blues,’ but you should think about graduate school and adding some tools to the toolbox.” So he helped me navigate applying to all these schools and I wound up at Cornell, which had a very small, almost monastic M.F.A. program. But for me, that was joy. That was the right thing to do, even when it was 6 a.m. and I was at the ballet bar, wondering if I made the right decision.

If you were singing and dancing at Cornell and aspiring to be in those musicals in junior high, then this is something of a full-circle moment for you.

Absolutely. This is the whole thing about the business, you’ve got to keep your instrument in tune. When I took all those dance and voice classes, it’s not like it went to the wayside, but I wasn’t using that as much here in L.A. because I was doing television. But I should have still been doing it. I kick myself about that now.

See, that’s just more proof that they should have let you sing on “Cop Rock.”