After closing the book on her splendid revival of “One Day At a Time,” creator Gloria Calderón Kellett is back with another series focused on new hilarious family. “With Love” holds commonalities with “One Day,” predominately in that both are about an intergenerational Latino family, but the Amazon Prime Video series finds even richer and deeper avenues to explore.

Each episode takes place on a different holiday across one year in the lives of the Diaz clan. Lily and her brother Jorge (Emeraude Toubia and Mark Indelicato, respectively) are approaching relationships from opposite sides. Starting on Christmas Eve, Lily has broken up with her boyfriend (and then failed to get him back), while Jorge is embarking on a new romance with the level-headed Henry (Vincent Rodriguez III). As each holiday approaches, we see the pair embark on a fresh set of challenges that, coupled with other events their relatives are going through, help inform their emerging identities.

Utilizing a different holiday for each episode is a unique concept that keeps an audience engaged while eschewing any unnecessary exposition. Early episodes, focused on Christmas, New Years, and Valentine’s Day, only have a a month in between, making it easy for the audience to understand and bond with the characters’ plights. Lily and Jorge are lovesick in different ways; their parents, Beatriz and Jorge, Sr. (Constance Marie and Benito Martinez) are secretly going through a rut in their marriage. As the season goes on, the distance between holidays (and characters) gets longer, yet it’s never unclear what’s happened in that time.

Toubia and Indelicato each bring strengths to the table. As Lily, Toubia’s earnestness never feels fake; like when she tells Santiago (Rome Flynn), whom she meets at various points throughout the narrative, she wants love to feel magical. Unfortunately, that makes it hard for Lily to compromise or see a relationship outside of short-term excitement. Indelicato is similarly extreme as Jorge, prone to dramatics and needing Henry to talk him down. This leads to several entertaining sitcom hijinks, from Jorge worrying that Lily’s solo trip to a winery could end in her death to Lily arguing with her boyfriend over a couch. The scripts, all written by Calderón Kellett, never veer completely into super-broad territory (the kind often associated with single-camera sitcoms), instead pushing just enough and bringing things back into a discussion of how Lily and Jorge must grow as people.

Like with “One Day,” the use of multiple generations opens the door to multiple layers of humor. Jorge and Lily warn most prospective paramours that, at times, it’s like they’re dating the whole family. Jorge especially struggles with this early on, as his grandmother interrogates Henry to define bisexuality. But in looking at how times have changed, Calderón Kellett is able to examine the ways society has grown. Isis King’s sensitive portrayal of Sol, a trans doctor embarking on a new relationship with her colleague Miles (“One Day” alum Todd Grinnell), leads to a thought-provoking discussion on specific ways trans people can interact with each other. King is wonderful to watch, particularly opposite Miles’ young daughter. Watching a trans woman share how she relates to children and her own personal desires for a family feels revolutionary. 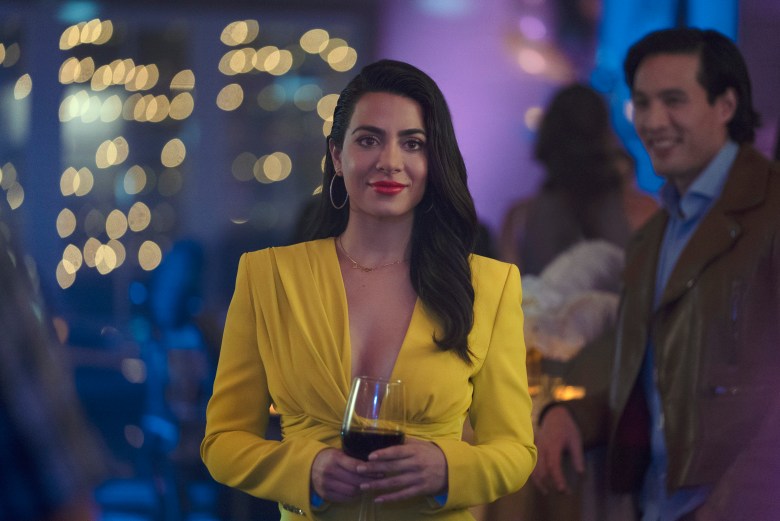 The rest of the cast is equally engaging to watch because the narratives are just slightly deeper than what we tend to see in dramedies of this stripe. Beatriz and Jorge Sr. are a married couple trying to find that spark, but what happens if one side can’t get over the hurt they’ve felt? To her credit, Calderón Kellett also acts in the series as Diaz family relative Gladys, a woman living her best life solo. It’s one of many elements of “With Love” that’s great because there’s a character either everyone relates to, especially if you have extended family.

The scripts understand the intricacies of relationships and explicate them beautifully. Case in point: Lily fails to recognize her own inability to compromise. From the start, we see her as a young woman terrified of losing a man she loves, yet never seeing her own part in why her relationships have failed. In just five episodes, the amount of growth written for the character, coupled with Toubia’s performance, helps the audience see that slight progression before the season ends. “With Love” isn’t about grand revelations, but the small milestones that lead to long-term success.

“With Love” could also be considered a serious growth opportunity for Calderón Kellett. Unlike “One Day At a Time,” which utilized an existing series, Calderón Kellett is building on the entire history of family TV storytelling. The situations here aren’t new, but they feel different in Calderón Kellett’s hands. “With Love” is a vibrant and engaging original on par with some of the best network content out there — deliciously captivating and hard to stop watching.