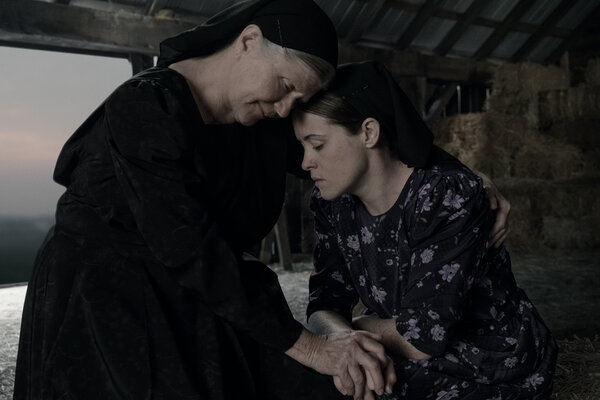 Every so often, “Women Talking” lets its attention wander away from its main concern (which is, as you might have guessed, women talking) to observe the hands of girls as they draw pictures, play complicated clapping and string-figure games or braid one another’s hair into intricate plaits. The grace and discipline of those activities, and the creativity they express, are woven into the film itself, which seems plain-spoken almost to the point of artlessness and turns out to be as layered and whorled as a hand-woven tapestry.

The women are members of an agrarian religious community that has kept its distance from modernity. An outsider’s pickup truck blasting the Monkees’ “Daydream Believer” is one of a handful of signs that this movie, directed by Sarah Polley from a novel by Miriam Toews, takes place anywhere near the present.

Toews’s book was suggested by actual events that took place in the 1960s at a Mennonite colony in Bolivia, but the film version doesn’t specify a location or a time. That vagueness reflects both the universality of the story’s themes and what the women know of the secular world, which is very little. Though many of them can recite the Bible from memory, they haven’t been taught to read and write.

Their educations have been minimal, but their wisdom, acquired through farm and household labor, child-rearing, prayer and intuition, is vast. Or at least sufficient to spur the emergence of a powerful and sophisticated collective political consciousness. How they arrive at a clear understanding of their oppression and potential liberation is the film’s subject, a source of suspense, emotion and inspiration.

What the women are talking about is what some of the men in the colony have done to them. Or maybe not quite that: They all know that a large number of their husbands, brothers, relatives and neighbors have been sneaking into the bedrooms of women and girls at night, equipped with a spray used to tranquilize livestock, and raping their unconscious victims. A few flashbacks to the aftermaths of some of the attacks are sufficient to convey their horror. Now that the colony’s elders have admitted the problem and the secular authorities have gotten involved, the question is how to respond.

While most of the men are away, bailing the accused perpetrators out of jail, a group of women meets in a hayloft to hash out a course of action. The women of the community have already voted in a referendum offering three choices: do nothing — forgive, forget and hope for the best; stay and fight; or leave. The first option having been soundly rejected, they settle in to debate the other two, arguing the relative merits of exit and voice.

Many of the participants favor exit, but “Women Talking,” as its title suggests, is mostly voice — a weave of voices in varying arrangements of harmony and dissonance. The calmest and most measured, but also in some ways the most passionate and principled, belongs to Ona (Rooney Mara), who is pregnant. Salome (Claire Foy) and Mariche (Jessie Buckley), two mothers of young children, provide antiphonal chords of anger. Both are victims of male violence, but they often turn their rage on each other. Two older women, Greta (Sheila McCarthy) and Agata (Judith Ivey), offer sympathy, perspective and occasional grandma jokes, though the necessary spark of mischief comes from the younger generation, boisterously represented by Liv McNeil, Michelle McLeod and Kate Hallett.

There’s also a man in the barn, whose job is to take the minutes of the meeting. His name is August, and he’s played with appropriate sensitivity by Ben Whishaw. In the book, he is also the narrator, but Polley has replaced him with a woman whom it might be a spoiler to name, leaving August as a reminder that while not all men are monsters to women, every man is implicated in the arrangements of power that enable the monstrosity.

But the movie isn’t about the men. They are a blank that it’s easy enough to fill in, a set of facts implied in the words and silences of the women. Away from their husbands, fathers, brothers and sons, the main characters experience a comfort that is clearly familiar, and a freedom that feels new. Their personalities peek out from behind the scrim of their defined, taken-for-granted roles.

“Women Talking” compels you to think about their plight, but it also invites you to enjoy their company. It seems contrary to Polley’s democratic method to single out performances for praise, but I found myself coming back to the wit that percolates underneath Foy’s ferocity, the deep sorrow behind McCarthy’s patience, Ivey’s beatitude, Hallett’s rambunctious high humor, Frances McDormand’s heartbreaking silence and August Winter’s unaffected dignity as a gender-nonconforming character named Melvin.

And also the poetry of Polley’s images (shot by Luc Montpellier), which show the beauty of life in the colony. Following Toews — and the women themselves, whose faith informs their rebellion — Polley takes the religious life of the colony seriously, refusing to treat it as exotic or outlandish. The point of leaving isn’t to reject belief, but to reestablish it on a firmer, more coherent moral basis, to imagine “a new colony” of trust and safety.

That idea is by definition Utopian, and also consistent with the radical Christian tradition that the existing colony represents. The root of Protestantism, after all, is protest — against arbitrary and unaccountable authority in the name of a higher truth. “Women Talking” reawakens that idea and applies it, with precision and passion, to our own time and circumstances. The women don’t want pity or revenge. They want a better world. Why not listen?