Seven Britons were in custody in Paris today in connection with the attempted ‘hit and run’ murder of a police officer outside the Israeli Embassy in France.

The four men and three women have not been named but are said to be London residents of Pakistani origin, who were travelling in a Mercedes and a BMW with false number plates.

Their vehicles were filmed threatening the policeman outside the hugely secure Embassy close to the Champs Elysée on Monday night.

‘They suddenly deviated from their direction of travel and rushed towards the officer, who narrowly escaped’ said an investigating source. 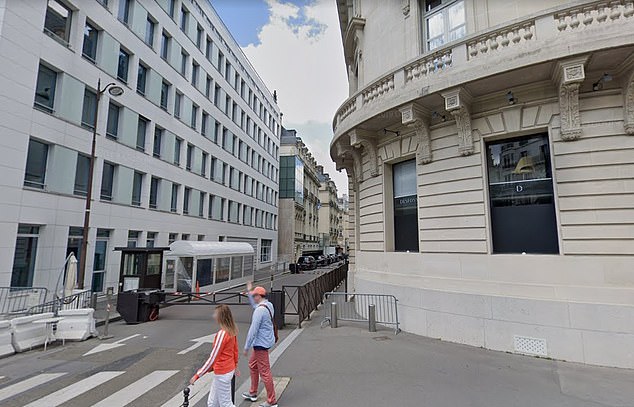 The secured entrance to the Israeli Embassy in Paris, just off the Champs-Elysee (Google streetview image)

Video surveillance cameras picked up the faces of three suspects in the Mercedes and three others in the BMW, and all were considered to be in a group, along with a seventh suspect who was not in the cars.

The two vehicles managed to escape after the 7pm attack, are were later seen ‘lurking’ close to the Elysée Palace, the official homes of the President of France, said a the source.

A city-wide manhunt was launched, and all the suspects were by Tuesday brought into custody at a secure police station in Paris.

Prosecutors on Wednesday confirmed that the men and women – who include two minors in their late teens – are being investigated for ‘the attempted murder of a person in public authority’.

The crime can be punished by a maximum sentence of life in prison in France.

An early theory advanced by investigators is that the suspects were planning a ‘hit and run’ on the police.

It follows rising tensions caused by the beheading of a teacher in the Paris suburbs last Friday by a radicalised terrorist infuriated that cartoons of the Prophet Mohammed were shown to children.

President Macron was today preparing to lead a National Hommage to Samuel Paty, the 47-year-old teacher who was murdered by Russia-born Abdullakh Anzarov, 18.

The beheading happened outside the Bois-d’Aulne school in Conflans-Saint-Honorine, north of Paris, where Mr Paty taught French and Geography.

An attempted murder enquiry has also been opened in Paris after two Muslim women were ‘stabbed repeatedly’ underneath the Eiffel Tower, prosecutors confirmed today.