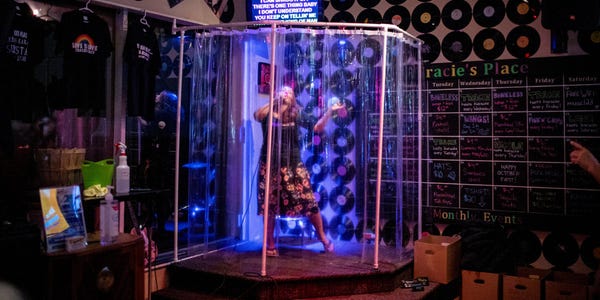 A karaoke bar in Canada has reopened during the coronavirus pandemic by installing a shower stall so that its patrons can sing inside, according to Reuters.

Tracie's Place Restaurant and Karaoke Bar in Hamilton, Ontario, set up the booth, made of hollow metal tubing and a transparent plastic curtain, to help curb the spread of the airborne virus, the agency reported. All that's missing is the shower head and some hot sudsy water.

Owner Tracie England has always encouraged shy patrons to "sing like you're in the shower" anyway, she told local newspaper The Hamilton Spectator — and now it's a little bit closer to reality.

The gambit has helped the bar to reopen for the last three months after shutting down in March due to local restrictions.

Businesses in Ontario began to reopen in stages in June, but karaoke bars were among the last allowed because of the risks associated with singing, Reuters reported.

Due to the virus being airborne, indoor activities that project the voice — such as singing or shouting — are considered a "super spreader" activity, as Insider's Anna Medaris Miller reported.

But thanks to the innovation, customers can belt their hearts out more safely from behind the shower curtain. "Doing it in the shower is a great way to stay sanitized and keep everything clean," England told Reuters.

England takes the time to clean the shower stall in between each performance, meaning there is often a backlog, the agency reported.

Ontario's coronavirus guidance to restaurants and bars includes recommendations for social distancing of six feet as well as barriers between customers and staff.

Many patrons still opt to keep their masks on during their performances. Some guests pictured in the bar decided on a socially-distanced duet, with one person standing in the "shower" and the other six feet away.

Continuing the idea, transparent shower curtains are also installed to separate tables from each other.

One customer, Michaela Hallok, told the agency it was "a fun little quirk that's added to the place … [England] cares so much about the people that come to this bar that she wouldn't risk putting anyone in danger."

Coronavirus cases in Ontario hit a lull over the summer, but have begun to rise again since September. The state reported 797 new cases on Thursday, the highest number since the pandemic began. Hamilton — where England's bar is located — has 83 cases out of 579,200, the state's cases tracker says.