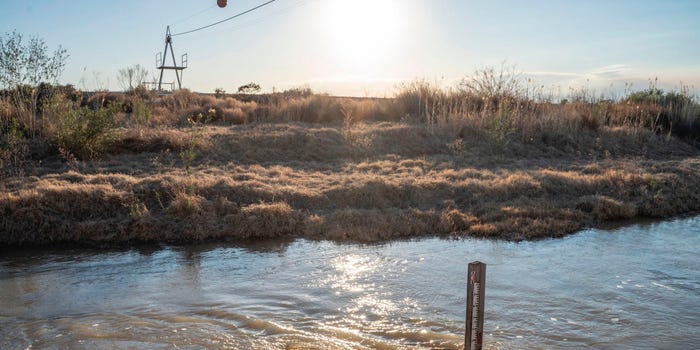 A Honduran woman gave birth to a baby girl on a harrowing journey into the US. The woman identified only as Merín had traveled across a river in a tire before reaching land and stumbling through vegetation. Smugglers were yelling at her from across the river, telling her to keep moving, the Associated Press reported.

The woman collapsed in pain. Two US Border Patrol agents attended to her as she went into labor on November 22.

"When I look, I see the head of a child," Agent Chris Croy told the AP. "I just kneel down to go ahead and support the child's head."

Agent Raul Hernandez saw that the woman's clothes were in the way and carefully cut it so she'd be better able to give birth as Croy held the newborn's head.

An ambulance showed up 10 minutes later and after three days in the hospital, Merín and her child were released to Catholic Charities. She later took a bus to be with family who were in the US.

Border Patrol agents allege that sometimes smugglers send people in medical distress to cross the border as distractions so others can sneak into the country. They claimed the smugglers who sent Merín across the river brought in five more people after her, but they were chased away, the AP said.

President Donald Trump's administration has imposed strict measures to limit illegal crossings at the border since 2018 when the child separation policy began. Detained immigrants were separated from their children in an effort to deter illegal crossings into the US.

In March, the administration rolled out new restrictions in light of the COVID-19 pandemic, which saw the expulsion of more than 159,000 migrants, of whom close to 9,000 were unaccompanied migrant children, from the country.

Axios additionally reported that, in November, 70,000 migrants crossed the US-Mexico border, a 64% increase from November 2019.